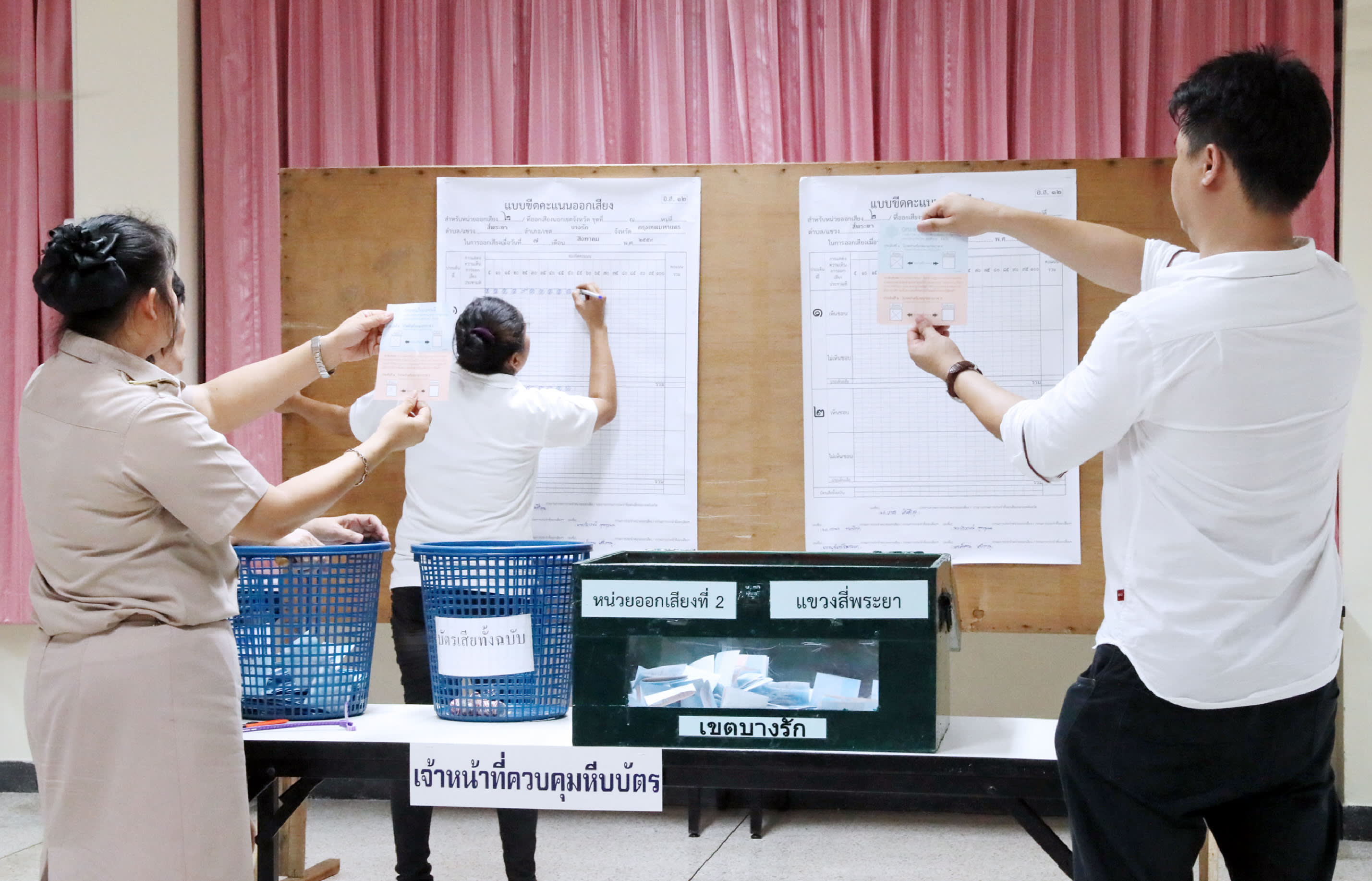 The overwhelmingly favorable result of Thailand's second-ever referendum has much deeper and wider significance than as a mere verdict on a military-backed constitution. Thailand's ruling generals under the National Council for Peace and Order, who seized power in May 2014, can now claim a semblance of legitimacy because the constitutional referendum was partly a people's judgment on their putsch and performance in government since then. Conversely, the astounding approval of the charter is a major blow to established political parties and, more broadly, places a big question mark over the cause of democratization around the world. For Thais, approval was partly a way to keep polls on course for next year or early 2018, as pledged by the NCPO, and a way to send a message against corruption and money politics, if not a validation of military rule as such.

Thailand's constitutional outcome evokes the result of the country's first ever constitutional referendum, in August 2007.  Voter turnout back then was 57% and the approval rate was at the same level, compared to the 74% average ratio for key general elections since 2001. With the weight of officialdom, from the bureaucracy and armed forces to elements of the pro-coup coalition against the previous elected governments of the Shinawatra clan (led by former Prime Minister Thaksin and later his younger sister Yingluck), the lower the turnout, the more effective was the organized pro-charter campaign and accompanying propaganda against graft-prone politicians. This time around, the government's coercive tactics against dissent and a new  law against anti-charter movements also neutralized and subdued those who would have otherwise mobilized to reject in greater numbers.

On a regional basis that has underpinned Thailand's protracted polarization, the most striking outcome was the slim margin of rejection -- at just 51% -- in the country's relatively poorer and largely rural northeast., compared with 62% rejection in 2007. The north, south, and central regions, including Bangkok, all voted favorably in line with previous numbers. Another protrusive result, unlike its precursor in 2007, was the convincing rejection of the draft charter in the three southernmost border provinces of Yala, Pattani and Narathiwat, beset with a virulent Malay-Muslim insurgency over the past 12 years.

Overall, the referendum patterns in 2007 and 2016 are fundamentally analogous. There is little time and space for the incumbent authorities, under coup leader ex-general Prime Minister Prayut Chan-ocha, to be complacent because the post-referendum polls in 2007 still went to a Shinawatra party. Approving the constitution back then was seen largely as just a means of getting to the polling booth. This time could be similar, although the junta-sponsored charter is a more watertight version aimed at maintaining indefinite military supervision over Thai politics through a military-appointed senate, which is now enabled by the referendum to pick the prime minister together with the elected lower house.

Thailand's two main electoral camps, the Pheu Thai party of Thaksin and Yingluck and the opposing Democrat party, lost out in this referendum. Pheu Thai, along with its associated red-shirt ringleaders under the United Front for Democracy Against Dictatorship, made their opposition to the draft charter clear through myriad media platforms, despite official suppression of dissent. The Democrat party leader and former Prime Minister Abhisit Vejjajiva, along with his mentor and predecessor Chuan Leekpai, staked their ground against the charter for being "undemocratic" just days before the vote. However, the Democrats' breakaway faction under Suthep Thaugsuban, who led the yellow-shirt street protests under the People's Democratic Reform Committee against the Yingluck government and laid the conditions for the coup, was committed to the NCPO and its constitution from the outset.

The lower rejection margin in the northeast this time may be seen as a temporary dilution of the Shinawatra effect. While Pheu Thai may not be the brand it once was in its north and northeast strongholds, the Democrat party is now split. The overwhelming charter approval in the south and in Bangkok, despite Abhisit's call to the contrary, suggests Suthep is more in charge of Thailand's oldest party.

For Abhisit, this referendum setback is yet another opportunity to show leadership and carve out a position against both corruption and the coup, against Thaksin, Suthep and the junta. Yet time after time he has not missed an opportunity to miss another opportunity. Thailand has thus not found civilian leaders capable of leading it out of a military-authoritarian wilderness.

With civilian leaders weakened and discredited, the NCPO will now feel emboldened and empowered to soldier on. The implicit bargain for public acceptance of its authoritarian rule has been premised on staying away from systematic and substantial corruption and from violent suppression of its critics. So far, graft allegations against the military government, compared to past standards of military dictatorships as in 1991-92 and earlier, have been relatively patchy rather than pervasive. The generals have harassed, intimidated and coerced people but not put them away for good by force. This bargain is also premised on Thailand's rare royal transition. Many Thais subconsciously and implicitly know that the military has an unwritten "midwife mandate" to see in the next regime -- a task that no individual or political party can uphold. The generals' limited mandate from the referendum must not lead to overconfidence and abuse of power, which would undo the bargain of being in transitional power.

The Thai referendum result -- which sides with a military-minded constitution and a quasi- military government through an appointed senate, the judiciary and accountability-promoting agencies, at the expense of elected representation -- has further challenged the narrative of global democratization. Authoritarianism is on the march across the world, from the Philippines and Turkey to Russia, Europe and even parts of America, but whether this democratic retreat in Thailand is transitory remains to be seen in the longer run. Thai voters have cut some slack for the military in what they see as a special situation. But ultimately they will have their say, as Thailand's record of elections and popular rule has shown time and again.