The retroactive impeachment of former Prime Minister Yingluck Shinawatra by Thailand's appointed parliament on Jan. 23 for dereliction of duty over her ousted government's controversial rice-pledging scheme has sapped efforts to reconcile the country's warring political factions.

It has also set the country up for longer-term turmoil as forces supportive of and opposed to the legacy of Yingluck's brother Thaksin Shinawatra, a deposed former prime minister himself, vie for dominance in Thailand's future political order.

This is all taking place in the twilight of King Bhumibol Adulyadej's 68-year reign. Amid this transition, Thailand has been under a virtual military lockdown since its second coup in eight years on May 22 of last year.

Yingluck's impeachment and consequent five-year ban from politics is merely a sideshow in the decadelong saga of who gets to rule Thailand and by what means.

The junta-appointed National Legislative Assembly's decision against Yingluck represents a power play, not a demonstration of the rule of law. She had already been disqualified from office weeks before the putsch for improperly overseeing a senior bureaucrat's transfer. Because the coup annulled the 2007 constitution, the case against her had to rely on enabling laws. Impeaching Yingluck after her ouster by a coup-installed regime with no constitution in place required an elastic approach to legal matters. Ultimately, the reason she was impeached was her failure to stop irregularities in the loss-making rice subsidy scheme.

As if to put all the nails in Yingluck's coffin, the NLA let off the hook two other Pheu Thai party executives, Somsak Kiatsuranon and Nikom Wairatpanich, who were also targeted in impeachment proceedings for their attempt last year to amend the pre-coup constitution and alter the composition of the Senate.

But in view of signals from Thailand's junta, known as the National Council for Peace and Order, particularly from Prime Minister and former Gen. Prayuth Chan-ocha, the NLA's overwhelming vote of 190 to 18, with a handful of abstentions and invalid ballots, was unsurprising. Targeting Yingluck reinforces the coup rationales of resolving conflict and eradicating corruption. More importantly, the danger for the coup leaders was that Yingluck, if not banned from politics, might well lead Thaksin's party machine to victory again at the next poll.

The rice-pledging scheme was clearly a disastrous miscalculation in trying to manipulate global rice prices, and its implementation indeed reeked of corruption. But if this measure of dismal policy with attendant corruption were applied to previous and future Thai prime ministers, most of them would fail the test.

The most revealing indicator of how far Thaksin's opponents are prepared to go to keep him at bay is the criminal prosecution of Yingluck on the same rice-related corruption charges, taking place simultaneously to her impeachment. Yingluck's worst-case scenario is a prison sentence.

Her criminal trial could go on for years, like other prominent corruption cases, or it could be accelerated into another power struggle, depending on how the ruling authorities want to play it. If banning her from politics does not keep her quiet and tame, banishment from Thailand is not inconceivable.

Imagining Yingluck sent into exile is easier for many than the likelihood of seeing her behind bars. If a quick trial and a jail term are imminent, she may well leave the country indefinitely and the military authorities may allow it. After all, such was her brother's fate.

The short-term fallout over Yingluck's impeachment is likely to be limited because the military is firmly in control, with martial law available to quell street protests. Prayuth, Defense Minister Prawit Wongsuwan and Interior Minister Anupong Paochinda are all former army chiefs who hail from the same military unit and have deep fraternal bonds stretching back four decades. The current army chief, Udomdej Sitabutr, is cut from the same cloth as the youngest of this army band of brothers.

These generals have essentially "securitized" Thailand's transitional interregnum as an existential national security priority. This is why they are unlikely to be in a hurry to leave office, regardless of how the drafting of the constitution progresses or the election timetable for early next year, unless they can control the outcome. This supposedly interim period could well become indefinite.

Not out of the woods

In the medium and longer term, however, the generals are likely to come under more pressure, and their resolve to get the country back on track will be put to the test. The backlash against the anti-Thaksin power plays over recent years -- featuring two coups in 2006 and 2014, first against Thaksin and then against Yingluck, two judicial dissolutions of Thaksin's parties in 2007 and 2008, and the latest impeachment vote by the NLA and criminal charges against Yingluck -- will likely become stronger.

Impeaching and banning Yingluck from politics has pushed the junta's professed goal of reconciliation even further away. Yet had Thaksin's opponents let her off lightly, her political standing and proven electoral appeal would complicate their post-coup plans. In hindsight, the Yingluck impeachment and political ban will be seen as part of an ongoing struggle in Thailand's contested political order.

Such a high-stakes contest is best resolved through compromise. In the longer term, neither Thaksin's forces nor his adversaries have the answer to Thailand's dilemmas.

Moving beyond both requires commitment to an inclusive, fair and balanced system of electoral representation and institutional restraint based on the premise that Thailand is owned by all Thais, not by a few color-coded elites. In recent years, the country's politics have been paralyzed because of insufficient representation across the spectrum.

No "third way" is in sight. But it must be found if Thailand is to regain its footing in a challenging transitional quest for a new balance between a remarkable royal reign and an electoral democracy that will not be denied.

Until then, Thailand will remain mired in political conflict, lurching from crisis to crisis and coup to coup, with varying shades of political color in between -- from yellow and red to blue and green -- and only incremental forward movement. 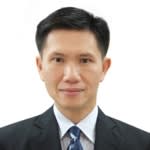