In a countermove, anonymous organizers host a pro-government event 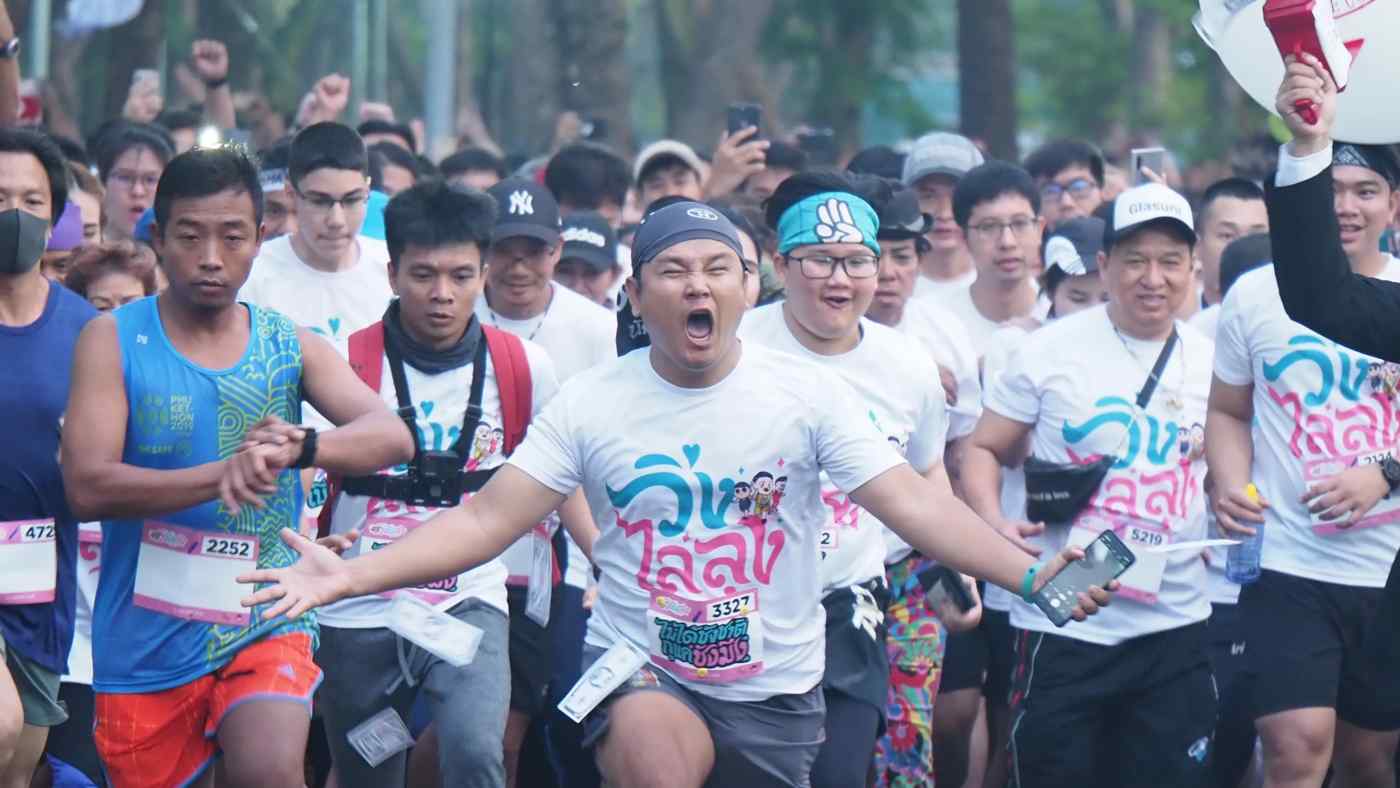 BANGKOK -- Thais on Sunday were offered their choice of activities combining fitness and politics: a run aimed at getting rid of the prime minister, or a walk to support him.

Thousands gathered at 7:00 a.m. for the run at Vachirabenjatas Park in northern Bangkok. The event, called Wing Lai Lung, translates as "Run to Oust the Uncle" in Thai, a play on Prime Minister Prayuth Chan-ocha's nickname: Uncle Tu.

An hour later, several thousand people turned out for a competing event, Dern Cheer Lung, or "Walk to Support the Uncle," at Lumpini Park in Bangkok's central business district. Participants in the free event, organized by some anonymous people, received handouts of T-shirts, pins, and caps.

Anti-government activists, led by Chulalongkorn University student Tanawat Wongchai, organized the anti-government run and similar events were held in 19 other locations in Thailand the same day. They are set up as runs to avoid a government ban on public demonstrations. "We would like to express our freedom and our opinion about the impact of chaotic policies that this government implemented to the country," the 21-year-old student said.

"I came to join this event to see Thais exercising and expressing our power for the better future of our country," said Tanawat Suwanapan. The 28-year-old teacher was one of the runners at the venue. "Today's event is a creative and beautiful way to express ourselves," he said.

"I joined this event to expel Prayuth," Setthawat Thanyaphongphiphat, 36, said. "I can no longer bear this awful economy. My salary has not increased in five years," added the employee of a small family business. Prayuth has been in power since 2014.

Police monitored the run but no major clashes had been reported as of 10 a.m. 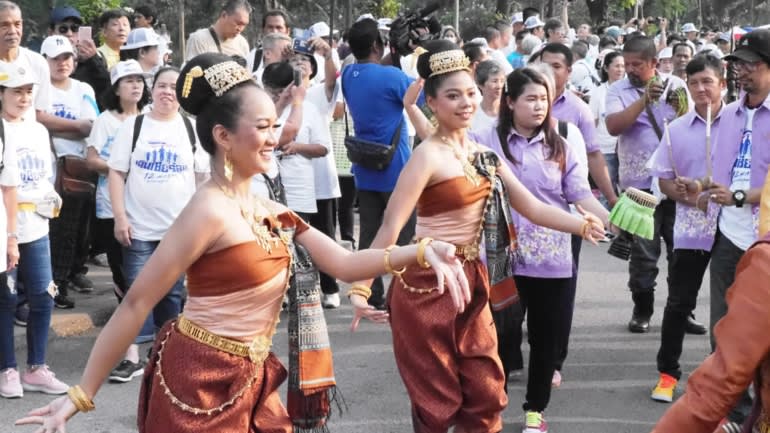 Women perform traditional Thai dance at the "Walk to Support the Uncle," a pro-regime event, in Bangkok on Jan. 12. (Photo by Masayuki Yuda)

Organizers earlier said that more than 10,000 runners registered for the event. Of these, 3,000 participants paid 600 baht ($20) for a T-shirt, a bib tag and a medal. 14,000 people participated in the event, according to the organizers' Facebook post on Sunday.

Thanathorn Juangroongruangkit, leader of the country's second-largest opposition party, Future Forward, ran as well. "The crowd of attendees shows the great awareness," he said. "Time left for the dictatorship is limited."

Although cabinet members were invited, none showed up.

The run was originally planned to be held at Thammasat University, near the Royal Palace in central Bangkok. But Tanawat said the organizers were pressured by the police to relocate to avoid a clash with participants in the rival walk, which was hosted by unnamed pro-government organizers.

The two events showed stark contrasts. While the run played an anti-government rap song for the young attendees, the pro-government walk entertained people with traditional Thai music and dance performance.

"I am 60-70% supportive of Prayuth, but I came out today because I want to see peace in our country," one of the attendees at the walk said. "I don't want any more unrest or buildings burning down," said the 63-year-old. Organizers of the walk said the event attracted 13,000 people, though the venue seen by a Nikkei reporter was far less crowded compared to the park for the run.

The competing events were closely watched by Thais ahead of a Constitutional Court ruling scheduled for Jan. 21 on whether the government's move to disband Future Forward will stand.

The party, in parliamentary elections last March, pledged to cut the military budget, restore the government to full civilian control and review the monarchy's role in politics. The pledges were interpreted by the current government as a challenge to the country's constitutional monarchy.

Future Forward, formed in 2018 by Thanathorn, a young business tycoon, came in for heavy criticism. The party and its executive were also hit with multiple lawsuits and criminal charges. For example, on Dec. 16, police filed charges against Thanathorn for organizing a peaceful rally two days earlier in Bangkok to oppose the government's attempts to dissolve the party. 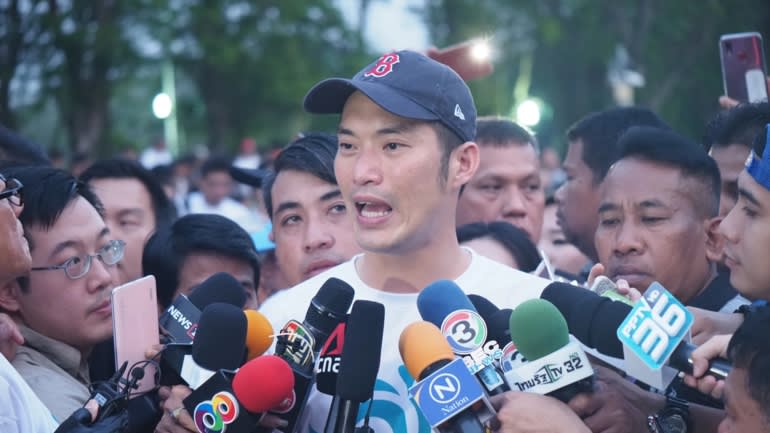 Future Forward leader Thanathorn Juangroongruangkit speaks to reporters as he joins the anti-government event in Bangkok on Jan. 12. (Photo by Masayuki Yuda)

But the party has strong support among young people, who complain about Thailand's hierarchical and unequal society.

According to a Dec 18-20 opinion poll by the National Institute for Development Administration, 31.4% of respondents said Thanathorn was the most suitable person for the prime ministership, while Prayuth came second with 23.7% support. The survey covered 2,511 people aged 18 and older.

The same survey showed that Future Forward had the most support among respondents, at 30.3% The pro-military Palang Pracharat Party, the leading force in the ruling coalition came in third with 16.7% support.

The international community is closely monitoring developments with Future Forward. When Thanathorn was stripped of his lower house seat in November, the U.S. and European Union sent diplomats to the Constitutional Court on the day of the verdict. If foreign governments decide that Thailand's democracy is under threat, the kingdom's foreign investment and trade may suffer.

"Concerned governments should urge Thai officials to drop these politically motivated charges against Future Forward Party leadership," said Brad Adams, Asia director at Human Rights Watch. "There should be no rush to return to business as usual with Thailand until the Prayuth government seriously commits to respect human rights," he added.

"I'd like everyone to use democratic mechanisms to join forces in developing the country first, rather than destroying one another," the prime minister said on Jan 6. "I really see no point in those people seeking to oust this person and that person -- either the groups supporting me or against me."

"There are only a thousand, or several thousand people behind these movements, while everyone else suffers the consequences," Prayuth warned.

The outbreak of street activism is just the latest episode in the kingdom's long history of political turbulence. Jatuporn Prompan, a key leader in the United Front for Democracy against Dictatorship, warned the government to ensure security at the events, or "third hands" might stir up trouble. The group participated in the 2014 demonstrations, which led to a coup by Prayuth.