DHARAMSALA, India -- There was only one student in the classroom. "There were 12 or 13 students several years ago," said the lonely-looking man in his 20s studying computer graphics in the corner.

The classroom is at a boarding school in Dharamsala, in northern India, where the Central Tibetan Administration, better known as the Tibetan government-in-exile, is located. People ages 18 to 30 who have recently fled the Tibet Autonomous Region in China receive basic education and job training here for three to eight years. The school had 700 students nine years ago, but the number has since dropped to 101. The third floor of the three-story building is vacant, many of its windows left broken.

Silence also reigns in the refugee reception center, the first stop for Tibetan exiles arriving in Dharamsala and seeking registration as refugees. The facility can accommodate 1,000 people, but recently only staff are present on many days. "Before 2008, over 3,500 refugees came here annually," said Wangchuk, 45, a researcher at the center. "Now [the figure] hardly crosses 100." It is especially rare to see children and women nowadays, according to Wangchuk. The reason for the sharp drop-off in asylum seekers is that leaving China has become much more difficult.

Fleeing Tibet has always been hard. Most refugees carry the food they need for the journey on their backs and head for India via the Nepalese capital, Kathmandu. Nepal borders China and recognizes Tibetans as refugees. However, even if they manage to slip past China's guards on the frontier, they face crossing the Himalayas on foot. They are at risk of death or injury from frostbite and falls.

Moreover, border security has been tightened since 2008, when the Beijing Olympics took place. That year, "riots" or "peaceful protests" -- depending on whether one is speaking to Chinese officials or Tibetan refugees -- occurred around the Tibet Autonomous Region. That led to heavier surveillance, not only in cities but in villages and near the border. Around that time, "China started to give equipment to Nepalese police and train them in Tibet," said a person with connections to the Tibetan government-in-exile. Beijing encouraged the police to arrest and forcibly repatriate refugees who had fled across the border.

The results were dramatic. According to refugees, guided journeys used to take 20 to 30 days from the Tibetan capital of Lhasa to Kathmandu. But, said one person who fled several years ago, "I didn't have a guide and lost my way, so it took me a month and 20 days."

As the number of new arrivals has dwindled, more Tibetans have committed self-immolation in Tibet and elsewhere in protest of Chinese policy. More than 140 people have burned themselves to death since 2009. "Father, being a Tibetan is so difficult," one 23-year-old mother wrote in her suicide note. "We can't even display the Dalai Lama's portrait. We have no freedom at all." At the Tibet Museum in Dharamsala, such suicide notes are exhibited, along with the photographs of about 100 people who have immolated themselves.

Looking back -- and forward

According to "Tibetan Nation," by U.S. historian Warren W. Smith, seventh-century Tibet was a unified, independent state that rivaled China's Tang dynasty for influence in Inner Asia. After the 13th century, Tibet built a priest-patron relationship with the Mongols, in which Tibet relied on them for military power while the Mongols were subject to Tibet in religious matters under the Dalai Lama, the supreme leader of Tibetan Buddhism.

Based on diplomatic documents and other historical records, Smith argues Tibet managed to achieve de facto independence under British patronage in the early 20th century. However, China, which claimed that Tibet was part of its territory, moved troops into the area around 1950, and the 14th Dalai Lama took refuge in India in 1959.

So far, about 130,000 Tibetans fled to India, including Dharamsala, New Delhi and the southern state of Karnataka. The 10,000 or so Tibetans of Dharamsala -- members of the government-in-exile, Buddhist monks and ordinary workers -- say they are grateful to India for giving them a place to live and freedom. But according to one monk in his 30s, "Everyone always feels anxiety about one thing," namely, what will happen after the 14th Dalai Lama, who turned 81 in July, dies.

The Dalai Lama "is very healthy," Lobsang Sangay, prime minister of the government-in-exile, said in an interview with the Nikkei Asian Review. "We believe he will live for more than 100 years"

Sangay assumed political leadership of the exiled Tibetans in 2011. The Dalai Lama, who received the Nobel Peace Prize in 1989, has influence with the leaders of many countries and is a spiritual pillar for Tibetans. "It is very difficult, almost impossible, to replace the charisma, the stature, the profile of His Holiness the Dalai Lama," Sangay said. "No Tibetans can." 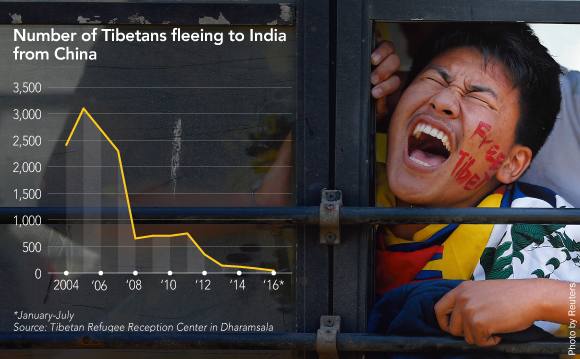 Still, he expressed confidence that there will be a 15th Dalai Lama, suggesting three ways one could be chosen: through "reincarnation," selection by all the high lamas or designation by the current Dalai Lama. At the same time, Sangay promised that the government would take responsibility for carrying on the "Tibetan freedom struggle."

But people are worried. "We always fear whether we'll be able to stay here [in India] after His Holiness passes away," said a 20-year-old saleswoman at a mobile phone shop.

There are hints that such worries may be justified. According to one highly placed source in the Rashtriya Swayamsevak Sangh (National Volunteer Organization, or RSS), a Hindu nationalist group from which Indian Prime Minister Narendra Modi draws support, a deal was discussed in informal talks during Chinese President Xi Jinping's visit to India in 2014 and a reciprocal visit by Modi to China last year.

Under the arrangement discussed, the source said, "China would not officially lay claim to several Indian territories, such as Sikkim, Arunachal Pradesh and parts of Jammu and Kashmir state." In exchange, "after the death of the current Dalai Lama, the Indian government would offer Tibetan exiles living in India citizenship -- and literally stop new exiles coming through Nepal to India. The Tibetan government-in-exile would also have to go."

The agenda will be "advanced gradually," the RSS official said, because the two leaders do not want to be seen as weak by their own citizens for having compromised.

Sangay has his doubts, since such an agreement would be based on a "false premise." "The Chinese government has designs not simply on Tibet but the whole world," he said. "That includes the South China Sea, East China Sea, ASEAN, Africa, Latin America, everywhere. Giving Tibet as a concession will not satisfy China at all."

The prime minister conceded that "independence is not possible for Tibetans," but he stressed that China's own laws make genuine autonomy a possibility. "Environmental protection, religious and cultural preservation, economic benefits for Tibetan 'minorities' -- all this is there in Chinese law."

Sangay said he will maintain the policy of direct dialogue with Beijing that the 14th Dalai Lama has pursued. To do so, the foothold of the government-in-exile in Dharamsala is essential. In his book, Smith quotes a 1912 British diplomatic document saying Tibet "should in reality be placed in a position of absolute dependence on the Indian government." After more than 100 years, that has not changed.

"Now, in India, we have the strong leadership of Prime Minister Modi. It is a good opportunity to help the Tibetan people," said Manav Jain, 20, an Indian student who visited the Tibet Museum and was grieved by the photos of people who had burned themselves to death. The question is whether Modi, who hopes to remain in office until 2024, will respond positively to the gratitude of Tibetans and the expectations of young people of his own country.