Time for idealism is over in ASEAN

Contradiction is the shared ideal beneath the grouping's multiple systems

Students wave Vietnamese national flags during a military parade in Ho Chi Minh City in April 2015 as part of the 40th anniversary of the fall of Saigon.   © Reuters
CopyCopied

The Association of Southeast Asian Nations will celebrate its 50th birthday in August with much backslapping and bonhomie. In recent decades, its 10 members have prospered, leaving behind the dark shadow of the Cold War when battles raged on almost every front.

One reason that the countries of ASEAN have proved such a stable configuration is that their own governments change very rarely. Over the past 50 years, there has been a strong trend towards the consolidation of custodial authoritarian regimes.

In Singapore and Malaysia, the long-entrenched political elites hold regular elections and tolerate modest amounts of dissent. But the powers-that-be make no apology for staying in charge.

Dissent is almost non-existent in Laos, Vietnam and Cambodia. Strongmen rulers, buttressed by iron-clad party machines, have taken advantage of the protections offered by ASEAN solidarity as they stomp out any potential opposition.

The situation in Brunei, an absolute monarchy with a stark vision of Islamic morality, is similarly constrained.

And while Thailand has often flirted with more participatory governance, the current situation is grim for the country's demoralized democrats, with a military dictatorship in Bangkok that is a throwback to the 1960s. 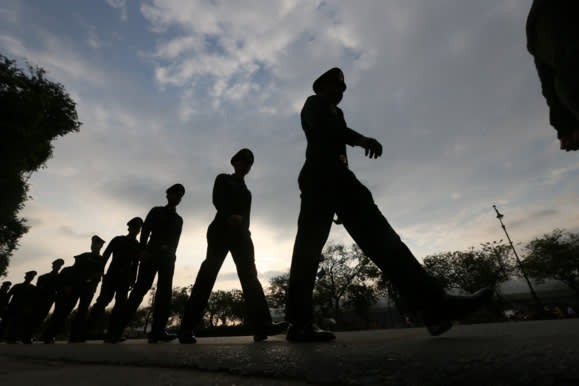 A coup in May 2014 has taken Thailand back under a strong military dictatorship. (Photo by Ken Kobayashi)

Even in the three countries that have held free-and-fair elections in recent years -- the Philippines, Indonesia and Myanmar -- there is deep anxiety about the direction of political management.

Attacks on the media, impunity for human rights abuses, and the re-entrenchment of elite economic interests give little hope for major social reform.

In those three ASEAN democracies, ethnic, social and religious minorities also continue to miss out. From time to time, powerful interests still go looking for easy targets, whether it is Muslims in Myanmar or the LGBT community in Indonesia.

In all these cases, the persistent role of the armed forces and security services complicates any expectation that elected civilian leaders will call the shots that matter. Across Southeast Asia, the link between military firepower and political clout is as strong as ever.

Myanmar offers the best example. It has recently made abrupt changes in its internal affairs, shifting away from almost five decades of direct army rule, yet struggles for fundamental rights are ongoing.

While it helps to keep an eye on the positive trends, Myanmar will not become a Southeast Asian Sweden any time soon. And those who still imagine a region-wide democratic renaissance will be sorely disappointed.

The situation across ASEAN is not immune to broader global trends. The Chinese ascendancy gives comfort to Southeast Asian leaders who will never willingly embrace competitive democracy. These leaders read China's growing strength as a clear signal that economic success does not require concessions to what they see as a failing global liberal order.

Even the rhetorical support for liberal ideals historically drawn from the U.S. no longer counts for much. For ASEAN's strongmen, Donald Trump sounds like the type of American president from whom they have little to fear. He will embrace their hard line on law enforcement and their general preference for crony capitalism. Some of ASEAN’s strongmen leaders see something of a kindred spirit in U.S. President Donald Trump.   © Getty Images

Trump's life-long commercial reflexes are well-attuned to the requirements of doing whatever it takes to stay on top. Some Southeast Asian leaders will imagine that he is a kindred spirit.

For ASEAN, even the European Union, for all its successes, no longer looks like a sensible model of regional cohesion. European suggestions about human rights and social inclusion now also have a hollow ring. At a time when other pan-regional bodies are failing to stay together, ASEAN will not listen to lectures on how it should adjust its own set-up.

Of course, ASEAN is proud of its own unlikely success. In cultural terms, there is not much that a fruit farmer from the highlands of Vietnam has in common with a banker from Singapore, or that a Muslim fisherman from southern Myanmar shares with a Catholic priest from Cebu in the Philippines. But they are all supposed to be part of the one ASEAN family.

What draws the region together is a shared ambition for economic growth, the survival pacts of its long-term elites, and the appreciation that a region divided could end up, yet again, in turmoil.

To avoid such dire scenarios, making ASEAN a central part of global governance has been a masterstroke, but one only made possible by the fact that all involved, especially those from outside the region, end up projecting their own vision onto the 10 Southeast Asian countries.

Despots see despots. Democrats want to imagine democrats. Deal-makers always find other deal-makers. The lack of a single or simple ASEAN ideology means the region can offer a mirror of infinite refracted possibilities. We can all see, in ASEAN, what we want to see.

What does this mean for the group's future?

ASEAN muddles through with a peculiar combination of indolence and opportunism. By adjusting to broader geostrategic shifts, the group has made it possible for old-style communists to hustle, cheek-by-jowl, with 21st-century tech tsars. Such contradiction is the shared ideal.

For its proponents, ASEAN's anniversary is, therefore, the moment to finally dismiss denunciations about shallow democratic practice or lack of attention to civil rights.

They see no credible alternative to their tried-and-tested system of muddied interests and deniable diplomatic wrangling. The ASEAN way means the big deals are only ever done behind closed doors and the cast of characters changes very slowly.

At the national, regional and global levels, this model of government deserves real criticism for what it fails to offer. But there is a bigger lesson here for the future of politics throughout the region.

The wonder of ASEAN is that the idealistic alternatives have been exhausted and that pragmatic -- yet untidy -- compromises appear the only viable way forward. Southeast Asia now serves as a warts-and-all model of how a reasonable level of peace and prosperity can be achieved -- if we accept there is no one size that fits all.

Nicholas Farrelly is associate dean of the Australian National University's College of Asia and the Pacific, where he also researches Southeast Asian politics.