TOKYO -- Tokyo Gov. Yuriko Koike on Sunday evening said she has won a second four-year term, with voters entrusting her to deal with rising coronavirus cases and the complex challenge of hosting next year's delayed Olympics.

The governor announced her win shortly after polling stations closed. "I have just been declared the victor in the election," she said. "I'm very grateful for the strong support I have received from the people of Tokyo."

Koike received more than 3.66 million votes with all ballots counted as of early Monday, far outpacing her rivals and topping the 2.91 million votes she garnered in the prior 2016 election.

The election result was widely expected, with the 67-year-old former newscaster drawing official and tacit support from the ruling coalition of Prime Minister Shinzo Abe as well as the country's largest trade union. But her victory came as Japan's capital struggles to stop a fresh COVID-19 surge -- daily cases have been exceeding 100, the highest in two months -- just as economic activity was beginning to return to normal.

Koike said the coronavirus is the most pressing issue facing the city of 11 million eligible voters, which accounts for a fifth of the nation's economy.

In her post-election remarks, the governor reiterated her position that the current increase in cases reflects aggressive testing in nightlife districts, and is not a repeat of the outbreak seen in March and April. She said she was not considering a return to blanket business restrictions and called for a targeted approach, without elaborating.

The conservative Koike -- the capital's first female leader -- will be the face of the metropolis if it does manage to hold the Olympic Games next summer, after the virus forced a one-year postponement. Just as she did during the campaign, on election night she stopped short of guaranteeing that the games would go ahead, only vowing to pursue a safe Olympics for athletes and residents alike. 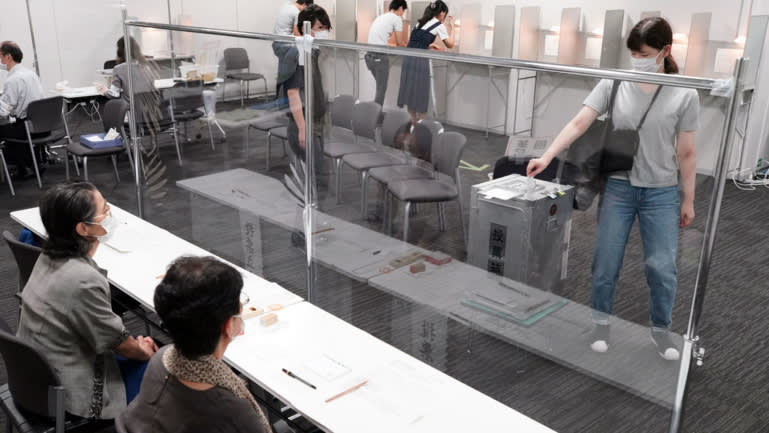 A voter wearing a face mask casts a ballot at a polling station in Tokyo on July 5. (Photo by Kei Higuchi)

Some of her rivals for the governorship had called for scrapping the games.

The election was contested by a record 22 candidates, among them Kenji Utsunomiya, a 73-year-old former chairman of the Japan Federation of Bar Associations, and Taro Yamamoto, a 45-year-old ex-lawmaker and actor.

Utsunomiya, backed by the liberal opposition Constitutional Democratic Party, argued that Japan should cancel the Olympics if the pandemic risk is too grave. He finished a distant second, 2.8 million votes behind Koike. Yamamoto, another challenger from the left flank, called for immediately calling off the games to save money, while handing out 100,000 yen ($930) to each resident.

Neither appears to have made much of a dent against Koike, who remains popular despite mixed results from her first-term policies, like reviewing the relocation of Tsukiji Fish Market and cutting Olympics-related costs. The market move went ahead in late 2018. And although she saved Olympics money by using existing venues outside the city, expenses had already ballooned well above organizers' initial figure before COVID-19 upended the plans, adding an estimated 300 billion yen in additional costs.

In her second term, Koike has vowed to make Tokyo a more internationally competitive city and financial hub, by spearheading a digital transformation and pushing the rollout of 5G networks. As one of the few female politicians in positions of power in Japan, many voters will be counting on her to promote gender equality as well, including more support for working mothers and single mothers.

In her victory remarks, Koike said she believes "the results reflect public support for what I have accomplished" with the "various reform initiatives I have pursued in the past four years."

She pointed to "a policy of putting people first, strong information disclosure and wise spending." Looking ahead, the governor added, "I also feel a strong responsibility for the mandate given by the people for the second term."