Gov. Yuriko Koike held a news conference in Tokyo to officially announce the launch of her new national party.
Politics

TOKYO -- Tokyo Gov. Yuriko Koike seeks to use her new national party as the foundation of an alternative to the right-leaning Liberal Democratic Party and left-wing opposition, building its platform on popular policies to capitalize on the upcoming snap election.

Koike set out to distance herself from her erstwhile LDP allies in a news conference here Wednesday. "Now we must boldly govern with no political shackles," she declared. Attending in support of Koike were 14 sitting lawmakers joining the governor's new Kibo no To, or "Party of Hope," including Masaru Wakasa and former Environment Minister Goshi Hosono. Koike asserted that the party would gain more allies, noting in a television appearance later that its list of candidates for next month's general election runs into the triple digits.

Like opposition leaders Seiji Maehara of the Democratic Party and Ichiro Ozawa of the smaller Liberal Party, Koike aims to establish a unified front against the ruling LDP that also excludes the left-wing Japanese Communist Party. She stressed Wednesday that the "spirit of conservatism" will serve as the basis for reform. 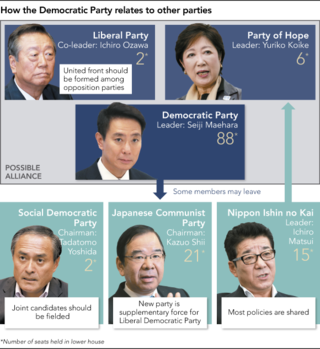 Kibo no To's agenda calls for ending the use of nuclear power, freezing the consumption tax, and reducing the number of seats in the parliament. Though Koike, like Prime Minister Shinzo Abe, favors revising the constitution, she says the discussion should extend beyond the pacifist Article 9 that is the focus of Abe's attention.

The formation of the new party has many in Tokyo's political nerve center of Nagatacho speculating that the governor is eyeing a return to the national stage.

"I must change national politics" to move Tokyo forward, Koike said Wednesday, likely addressing criticism from the ruling coalition of her dual role as governor of the capital and head of a national party. Yet with the election period set to kick off Oct. 10, she is expected to spend a good deal of time campaigning away from the city hall, leading some Tokyo officials and lawmakers to fume that the demanding task of governing the capital will fall by the wayside.

Some contend that Koike could turn criticism of her wearing two hats to her advantage, using it as justification to run for a lower house seat herself to change politics in the capital from the national level. But doing so could leave her open to attack for leaving her Tokyo post before her term ends.

The governor neither confirmed nor denied the possibility in a TV appearance Wednesday, saying only that she is "listening to the voices of the 2.91 million people who cast their votes" for her in last year's gubernatorial election.

Former Prime Minister Junichiro Koizumi, who appointed Koike environment minister in 2003 and is now a prominent anti-nuclear activist, said Kibo no To could win considerable support if it makes nuclear energy a campaign issue. But he also said he advised Koike to see out her term as governor.

Koike will "probably make a final decision soon" based on opinion polls and other factors, a Kibo no To insider said.