Tokyo's governor gets a crash course in the perils of populism Tokyo Gov. Yuriko Koike stepped down as the leader of Party of Hope after just 50 days. (Photo by Maho Obata)

TOKYO The opposition Party of Hope, launched with great fanfare by the popular Tokyo governor in September, saw its fortunes turn upside down in just 50 days.

The party was once seen as a credible force that could possibly unseat Prime Minister Shinzo Abe's Liberal Democratic Party. But it botched a merger with the Democratic Party and ended up with a crushing defeat in the October general election. The disastrous outcome exposed the limits of relying on fickle voter sentiment.

The story of its precipitous rise and fall began on Sept. 17, when reports emerged that Abe was preparing to dissolve the Diet's lower house for an October snap election. Seiji Maehara, then the Democratic leader, knew just whom to contact: maverick Tokyo Gov. Yuriko Koike, said to be eyeing a return to national politics. One email and one phone call later, an alliance was set. 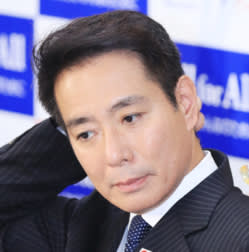 Both Maehara and Koike, a former Liberal Democratic Party lawmaker and defense minister, got their start on the national stage in the 1990s as members of the short-lived Japan New Party. The political winds brought them together again this year. Koike's local Tomin First no Kai, or "Tokyoites First" party, trounced the LDP in July's Tokyo Metropolitan Assembly race. Even before becoming leader of the Democrats on Sept. 1, Maehara began sending signals that he would be keen to team up with her in the next national election.

A CLEAR CHOICE When the time came to consider strategy in that race, Maehara had two choices. He could ally the Democrats with existing opposition parties, including the Japanese Communist Party, or work with Koike, who at that point had no national force of her own. Between Maehara's own disinclination to work with the Communists and hope among Democrats that Koike fever could blaze a path to victory, he naturally leaned toward the latter option.

On Sept. 25, Koike formally announced her new Kibo no To, or Party of Hope, with herself at the helm. The following night found Koike and Maehara face to face with President Rikio Kozu of the Rengo labor lobby, the core supporter of the Democratic Party. That group, formally the Japanese Trade Union Confederation, would extend support if Hope agreed both to fully accept policy agreements Rengo made with candidates it backed and to endorse all Democratic hopefuls, Kozu said. Prospects appeared strong, with Koike telling the two men that she would "give positive consideration" to the proposal, according to a source close to the matter. Emboldened by what they took as the governor's enthusiasm and the prospect of seizing political control without help from either the Communists or the ruling LDP, the pair decided to have Hope and the Democrats effectively merge, uniting Rengo's power to turn out the labor vote with Koike's ability to stir up public interest.

The first signs of trouble emerged soon after. Maehara proposed fielding roughly 200 Democrats and 100 Hope candidates to vie for the 289 single-seat districts for the lower house. But Koike's party insisted the allies put forth around 150 candidates each. The governor was of the mind that her movement would have little significance if Hope took only 60 to 70 seats, Maehara said in a television appearance on Nov. 16.

At that point, the fledgling party was confident that it could carry the Tokyo area even without the Democrats' help. And media polling after Abe dissolved the lower house on Sept. 28 showed nearly 20% of respondents supporting Hope.

But in the following days, a draft of the policy pact Hope intended to have candidates sign surfaced. Those wanting support, it was revealed, would have to embrace controversial national security legislation passed in 2015 over fierce objections by Democrats. The party's liberal wing revolted, resentful of being put to a political litmus test. Koike's declaration that she would "exclude" any candidate she disagreed with on key policies also ruffled feathers, setting off speculation as to which Democrats would and would not make the cut. The rift became official on Oct. 2, when liberal Democratic heavyweight Yukio Edano launched his own Constitutional Democratic Party, telling Maehara that he was embarking on a different path with his friends and allies. The opposition thus entered the campaign season fractured, upending plans for a united front against the ruling bloc.

Meanwhile, Koike's decision not to run for a Diet seat robbed Hope of its strongest asset: buzz around the Koike name. The party could not present itself as a credible governing party without its own nominee for prime minister. Hope ultimately took just 50 seats, far shy of a 233-seat majority.

UNPREPARED According to Maehara, much of the blame for this "disastrous" outcome lies with the fact that the allied campaign was something of a rush job. Hope's platform struck many voters as slapdash -- one plank called for the elimination of hay fever. Candidates with no ties to the districts they were running from were roundly defeated.

Even if Hope had managed to take a majority in the lower house, the party may well have crumbled soon after, according to some members. A seven-party coalition government that formed in 1993 dissolved after only nine months -- a collapse both Maehara and Koike saw firsthand. Even the Democratic Party of Japan, precursor to the Democratic Party, was criticized as ill-prepared to govern when it took power in 2009.

A failure to learn from these mistakes proved Hope's downfall. Far more effort went toward criticizing the Abe government than holding substantive discussions on policy, and the party eschewed the local campaigning needed to develop a cohesive electoral base. By election time, Hope had struck many voters as merely a passing fad.

Maehara stepped down as Democratic leader on Oct. 30, and Koike resigned as party chief on Nov. 14. Only time will tell whether Hope finds its center or dissolves, its moment past.