Tokyo steamrolls Okinawa opposition to new US base

TOKYO -- Japan's central government has overruled an order by the governor of Okinawa Prefecture to stop construction work on a controversial new U.S. military base on the island -- a move that has caused a strong outcry in the southern prefecture. 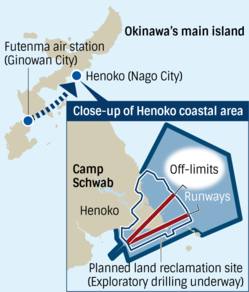 It marks the latest showdown in two decades of Tokyo's strained relations with Okinawa over the heavy concentration of American military forces there.

"We will proceed, as planned, with seabed boring and other survey work while taking every measure to protect the environment," Chief Cabinet Secretary Yoshihide Suga told a press conference on March 30.

To push a much-delayed closure of the existing base, which is located in a densely populated area of Okinawa, the central government wants to complete the survey by around June and start landfill work in the summer.

The row came at a delicate time for bilateral ties with the U.S. Prime Minister Shinzo Abe is due to visit that country in late April for talks with President Barack Obama and an address to the joint session of Congress, among other highlights of a weeklong trip. He seeks wider defense cooperation with Japan's most important ally at a time of China's rising assertiveness in the region.

The latest rift came after Okinawa Gov. Takeshi Onaga issued a directive on March 23 ordering the Okinawa Defense Bureau -- the local branch of the Defense Ministry -- to suspend survey-related work off the coast of Henoko, where an airstrip is to be built atop landfill.

Based on a law designed to protect water resources, Okinawa officials maintain that the placement of concrete blocks on the seabed may have damaged coral reefs. The central government in turn asked the fisheries ministry to look into the legality of this directive under an administrative appeal act.

March 30 was the deadline set by Okinawa for the government's response. However, the fisheries ministry put the directive on hold, pending a ruling on the appeal.

Appeals can take several months. During that time, the government is allowed to continue with the survey work. Tokyo apparently hopes that the extra time will serve as a cooling-off period during which the governor's anti-relocation efforts may be curbed somewhat.

"This is quite regrettable," Onaga said in response to the ministry's decision, while also criticizing the lack of transparency surrounding the review. Asked whether revoking permits for relocation-related work is on the horizon, he said: "We are now consulting with experts on this and other issues."

Tokyo and Okinawa have a history of conflict. In 1998, the government won approval from the city of Nago on the relocation of U.S. Marine Corps Air Station Futenma, but then-Gov. Masahide Ota staunchly opposed it. "Relocation work made absolutely no progress," according to a senior Defense Ministry official, until Ota was unseated by Keiichi Inamine in a contest later that year.

In the background is a court battle that started in 1995. The central government sued Ota for refusing to endorse the continued lease of land on Okinawa for American military bases, and the Supreme Court ruled in favor of the government in 1996. The issue remained unsettled until 1997, when the law was revised to allow land leases to remain in effect even after the contracts expire.

In the gubernatorial election last year, the anti-relocation Onaga defeated incumbent Hirokazu Nakaima. With that in mind, Onaga told reporters: "The will of Okinawans is clear."