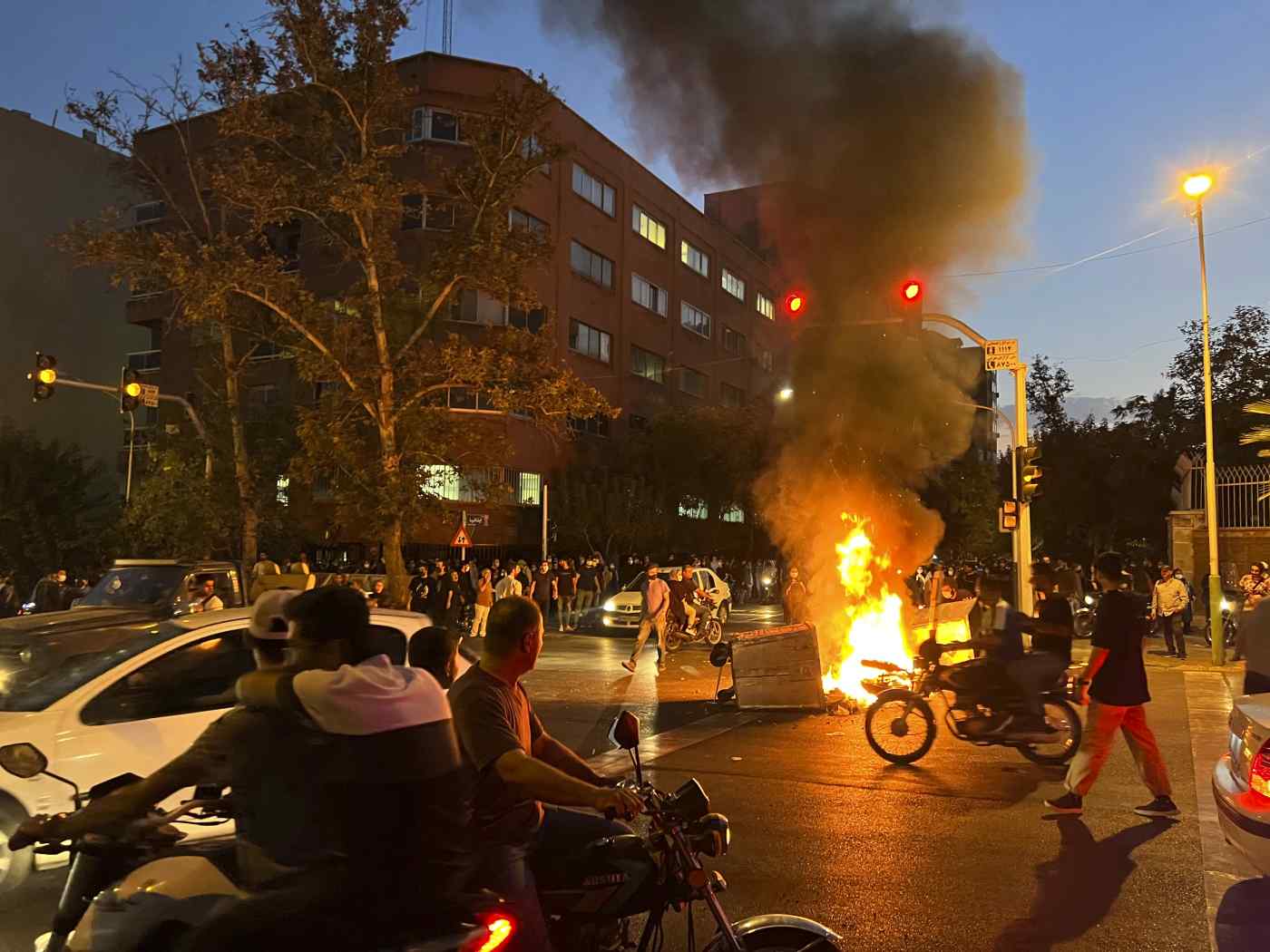 Crowds gather around a burning police motorcycle and trash during a protest in Tehran on Sept. 19 over the death of Mahsa Amini, who was died while under detention by Iran's morality police.   © AP
October 3, 2022 14:17 JST | Iran
CopyCopied

DUBAI, United Arab Emirates (AP) -- Iran's parliamentary speaker warned Sunday that protests over the death of a young woman in police custody could destabilize the country and urged security forces to deal harshly with those he claimed endanger public order, as countrywide unrest entered its third week.

Posts on social media showed there were scattered anti-government protests in Tehran and running clashes with security forces in other towns Sunday, even as the government has moved to block, partly or entirely, internet connectivity in Iran.

Parliament Speaker Mohammad Bagher Qalibaf told lawmakers that unlike the current protests, which he said aim to topple the government, previous demonstrations by teachers and retirees over pay were aimed at reforms, according to the legislative body's website.

"The important point of the (past) protests was that they were reform-seeking and not aimed at overthrowing" the system, said Qalibaf. "I ask all who have any (reasons to) protest not to allow their protest to turn into destabilizing and toppling" of institutions.

Thousands of Iranians have taken to the streets to protest the death of Mahsa Amini, 22, who had been detained by Iran's morality police in the capital Tehran for allegedly not adhering to Iran's strict Islamic dress code.

The protesters have vented their anger over the treatment of women and wider repression in the Islamic Republic. The nationwide demonstrations rapidly escalated into calls for the overthrow of the clerical establishment that has ruled Iran since its 1979 Islamic Revolution.

Iranian state TV has reported that at least 41 protesters and police have been killed since the demonstrations began Sept. 17. An Associated Press count of official statements by authorities tallied at least 14 dead, with more than 1,500 demonstrators arrested.

Qalibaf, the parliamentary speaker, is a former influential commander in the paramilitary Islamic Revolutionary Guard. Along with the president and the head of the judiciary, he is one of three ranking officials who deal with all important issues of the nation.

The three meet regularly and sometimes meet with Supreme Leader Ayatollah Ali Khamenei, who has final say on all state matters.

Qalibaf said he believes many of those taking part in recent protests had no intention of seeking to overthrow the government in the beginning and claimed foreign-based opposition groups were fomenting protests aimed at tearing down the system. Iranian authorities have not presented evidence for their allegations of foreign involvement in the protests.

"Creating chaos in the streets will weaken social integrity, jeopardizing the economy while increasing pressure and sanctions by the enemy," he said, referring to long-standing crippling U.S. sanctions on Iran.

His remarks came after a closed meeting of Parliament and a brief rally by lawmakers to voice support for Khamenei and the police, chanting "death to hypocrites," a reference to Iranian opposition groups.

The statement by Qalibaf is seen as an appeal to Iranians to stop their protests while supporting police and the security apparatus.

Meanwhile, the hard-line Kayhan daily said Sunday that knife-carrying protesters attacked the newspaper building Saturday and shattered windows with rocks. It said they left when Guard members were deployed to the site.

On Saturday, protests continued on the Tehran University campus and in nearby neighborhoods and witnesses said they saw many girls waving their headscarves above their heads in a gesture of defiance. Social media carried videos purportedly showing similar protests at the Mashhad and Shiraz universities but The Associated Press could not independently verify their authenticity.

A protester near Tehran University, 19-year-old Fatemeh who only gave her first name for fear of repercussions, said she joined the demonstration "to stop this behavior by police against younger people especially girls."

Abdolali, a 63-year-old teacher who also declined to give his last name, said he was shot twice in the foot by police. He said: "I am here to accompany and support my daughter. I once participated in the 1979 Islamic Revolution that promised justice and freedom; it is time to materialize them."

Protests resumed on Sunday in several cities including Mashhad, according to social media reports, and Tehran's Sharif Industrial University, according to the semiofficial Tasnim news agency. Witnesses said security was tight in the areas nearby Tehran University and its neighborhoods downtown as hundreds of anti-riot police and plain clothes with their cars and motorbikes were stationed on junctions and squares. The AP could not immediately verify the authenticity of the reports.

Also on Sunday, media outlets reported the death of another Revolutionary Guard member in the southeastern city of Zahedan. That brought to five the number of IRG members killed in an attack on a police station by gunmen that, according to state media, left 19 people dead.

It wasn't clear if the attack, which Iranian authorities said was carried out by separatists, was related to the anti-government protests.

Local media said a police officer also had died in the Kurdish city of Marivan, following injuries during clashes with protesters. The protests have drawn supporters from various ethnic groups, including Kurdish opposition movements in the northwest of Iran that operate along the border with neighboring Iraq.

Amini was an Iranian Kurd and the protests first erupted in Kurdish areas.