Takeo Mori handled TPP talks with US, will now grapple with an assertive China TOKYO -- Japan named veteran diplomat Takeo Mori as the country's new vice foreign minister effective Tuesday, tapping his experience handling some of Tokyo's most delicate negotiations with the U.S. to navigate the ever-fraught ties with China.

By taking the position, he is now the top career official at the ministry.

Mori, whose diplomatic mettle has earned him the trust of Prime Minister Yoshihide Suga, will help lead the Foreign Ministry as Suga grants the agency greater say over Japan's security and foreign policy.

Mori was in charge of persuading Washington to scrap auto tariffs during talks in 2015 for the Trans-Pacific Partnership trade pact. The U.S. resisted the idea until Mori -- at 4 a.m. on the very last day of negotiations -- convinced Wendy Cutler, then the acting deputy U.S. trade representative, to agree on a 25-year period for removing the tariffs.

"The international environment is changing more dramatically and more deeply than ever experienced by postwar Japan," Mori told ministry staffers Tuesday. "In the face of crisis, I urge you to fulfill your duties knowing that you are a part of our foreign policy."

Mori replaces Takeo Akiba, who is expected to become national security adviser, according to media reports.

"I want you to have confidence, and not be swayed by what former officials say," Akiba told his successor.

During Suga's tenure as chief cabinet secretary, Mori engaged in thorough and difficult negotiations with the U.S. over relocating the Marine Corps' Futenma military base in Okinawa.

The Japanese diplomat is known within and beyond the Foreign Ministry for helping Tokyo navigate the delicate transition between U.S. Presidents Barack Obama and Donald Trump. Shinzo Abe, then Japan's prime minister, met with Trump in New York following his November 2016 election victory. Abe also made a historic visit to Pearl Harbor with Obama in December of that year. Mori was in close contact with both camps as director-general of the North American Affairs Bureau. 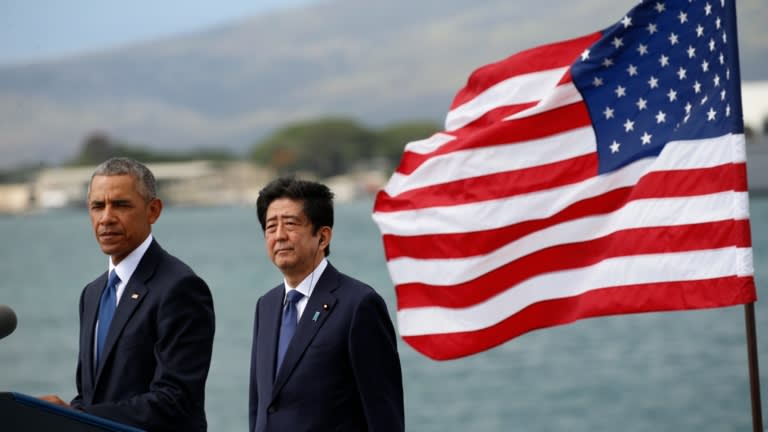 A former Japanese foreign minister, Nobutaka Machimura, also holds Mori in high regard. Mori served as secretary to Machimura over a decade ago.

"Mori is the only person I trust my back to," Machimura had said.

Mori received his language training at the ministry in German, making him the first vice foreign minister in 34 years to have trained in the language. He spent part of his childhood in Germany for his father's work. He played soccer while in high school, and attempted to install a futsal court on the roof of the Foreign Ministry.