Captain Ryoko Azuma opened a crack in the male-dominated MSDF 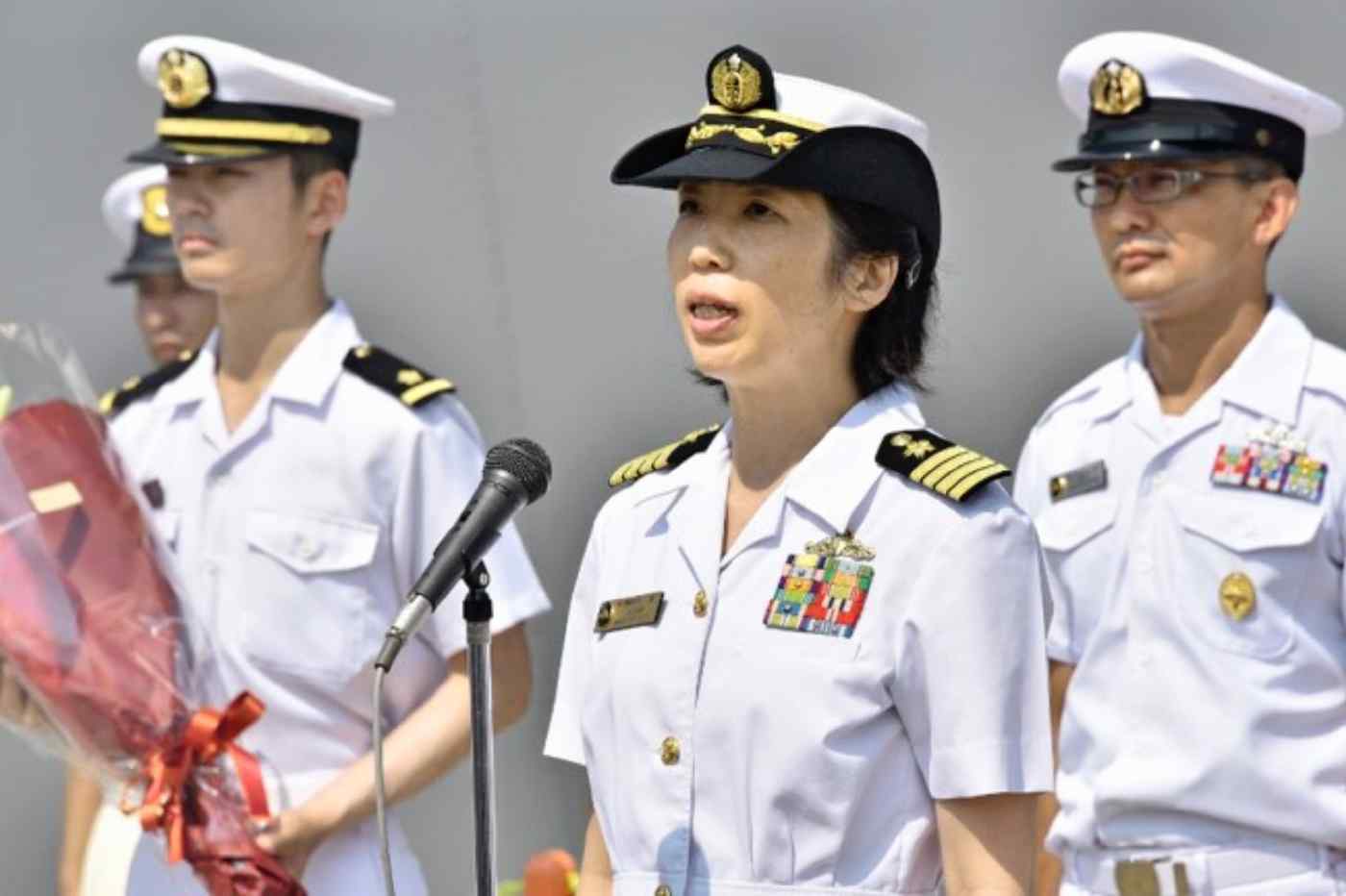 TOKYO -- Last March, 50 women graduated from Japan's naval academy in Etajima, Hiroshima Prefecture. Although women still make up only a small part of Self-Defense Force personnel, their presence is growing thanks in part to groundbreaking women who have come before them.

Among them is Capt. Ryoko Azuma, who last year became the first woman to command a Japanese naval squadron, more than 20 years after her own graduation.

Her career is full of "first female" milestones. In 1992, she joined the first class to admit women to the National Defense Academy, six years after Japan enacted its equal employment opportunity law.

She now commands a combined crew of 1,000 on four destroyers in the Maritime Self-Defense Force's First Escort Division, based in Yokosuka, Kanagawa Prefecture. The squadron consists of four destroyers, including the Izumo, a helicopter carrier that will be redesigned as an aircraft carrier capable of carrying F-35 jet fighters.

Always at the top of her class, she has steadily climbed the ranks of Japan's Self-Defense Forces, more than 90% of whose personnel are men. The destroyer Ikazuchi, part of the squadron commanded by Azuma, escorts a civilian ship in the Gulf of Aden in 2018. (Courtesy of Japan Defense Ministry)

Azuma did not originally plan to join the SDF; she had thought of becoming a nurse, as she had always wanted to help others.

But after seeing a notice about the Defense Academy's entrance examination, she told her father she was thinking of taking the test. Her father, who had also applied to the academy, encouraged her. She did not realize until after she applied that the school had just started accepting female students that year.

"It didn't bother me, being surrounded mostly by men," Azuma said in an interview, but she could tell that her male peers were evaluating her harshly.

"To some extent I was seen as something foreign," she said. "Some of my male colleagues may have been proud of the academy as an all-male school." Upperclassmen at the academy told her to stop thinking of herself as a woman.

Curricula were different for female and male students. Men were required to train aboard a destroyer in their fourth year, while women were assigned to supply vessels.

Destroyers, equipped with missiles and torpedoes, are the key vessels that conduct patrols and surveillance in the waters around Japan. Assigning female students to supply vessels reflected the MDSF's position that women were unfit to serve on combat vessels. Azuma was even told that female officers would never have the chance to serve on destroyers. 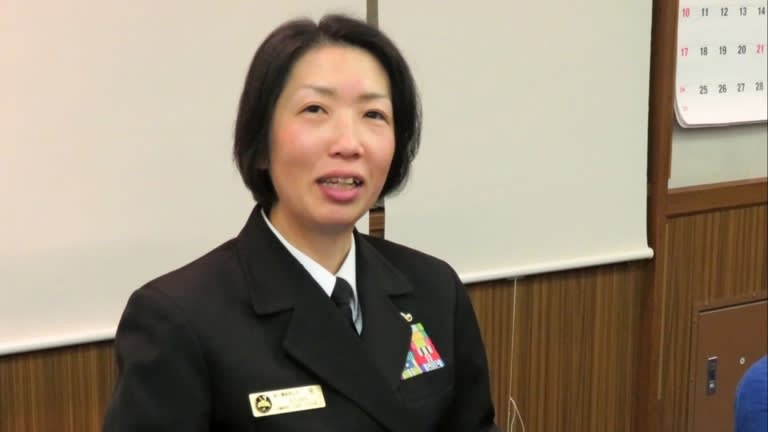 Azuma commands a squadron of four ships: the Izumo, the Ikazuchi, the Murasame and the Hatakaze.

Nevertheless, she steadily advanced, becoming the MSDF's first female captain in March 2013 when she took command of the Setoyuki, which conducts training voyages. Some senior officers were skeptical of her appointment, an MSDF personnel officer said.

Azuma said seeing the captain's chair filled her with a sense of heavy responsibility, knowing that she would be responsible for more than 100 crew members. But she was determined to press forward. "If I fail here, there may not be any female captains after me, I thought. I'll be attacked if I show any weakness," she said.

Azuma's subordinates did not know how to react at first. Few had experience working with a female commander, and they seemed unsure of how to communicate with her. She declined the offer of a pink cover for her chair, and refused to have her cabin to be cleaned by female crew members, fearing it would increase their workload. Azuma completed a 150-day training voyage as captain without any problems, remembering her relief when she sailed into her ship's home port of Kure, Hiroshima Prefecture, in western Japan.

Last March, the woman who was once told that she would never serve on a destroyer assumed command of a four-destroyer squadron.

And she has been busy. The destroyer Ikazuchi -- part of her squadron -- left port with about 200 crew members last August to conduct anti-piracy operations in the Gulf of Aden. The ship arrived in Djibouti in September after port calls in Singapore and Sri Lanka, and escorted about 10 vessels over six months.

The long voyage and life in equatorial Africa put an enormous strain on the crew. Maintaining morale was a difficult task. Azuma took a hands-on approach to the problem. Masahiko Sato, a 41-year-old chief gunner's mate, said he often saw the captain peeling potatoes in the galley in the morning during the voyage.

She would say things like, "Good food is the foundation of good morale," and "Peeling potatoes for 200 sailors is hard work," he said. 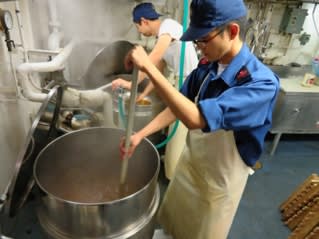 She would also speak casually with crew members to check on their physical and mental condition. "I have never seen such an attentive commander since I joined the MSDF 30 years ago," said Hiroyuki Ogata, a 51-year-old chief mess management specialist.

Ryusuke Kidokoro, a 22-year-old officer in charge of engine maintenance, recalls that Azuma was constantly checking to make sure everything was functioning smoothly.

"Some say a commander should not be doing this kind of work, but I don't care," she said. "The ship functions because everyone is performing their role."

Running a warship involves a wide range of duties, including engine maintenance, cooking, weapons operations and management. Azuma believes she should see things with her own eyes to command the ship effectively.

But attention to detail alone is not enough to pull a squadron together. Commanders need to be able to make tough decisions. Atsushi Sakurai, a 43-year-old officer who joined the anti-piracy operations as captain of the Ikazuchi, said Azuma was quick to make decisions and take action.

Azuma has steadily moved up the ranks to become a squadron commander, but no female officer has yet reached the position of vice admiral. Asked if she believes there is a glass ceiling in the MSDF, she responds indifferently. "I've never felt there's one, and I've never particularly thought that I want to overcome something like that." 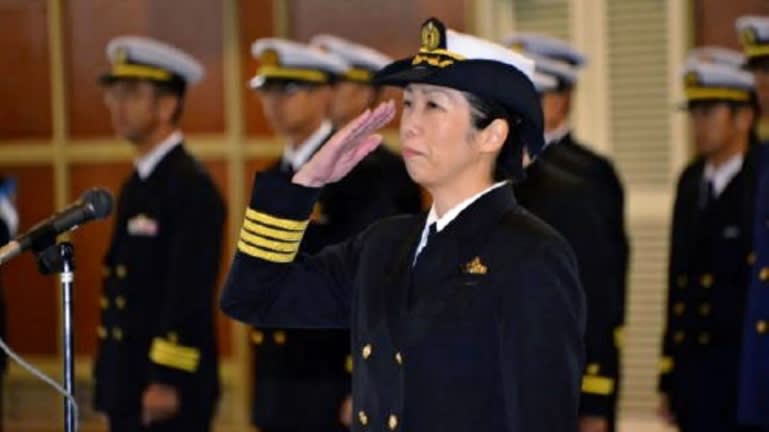 Azuma give a salute at the Yokosuka base upon returning from an anti-piracy mission.

"I don't think too much about being a woman myself," she added.

But Azuma had reservations about joining the academy as a young student years ago. When she asked an upperclassman whether she and other women were wise to join the academy, her senior replied: "You'll know in 10 years."

That is to say, if female graduates continue to tough it out even after 10 years, and women continue to join the naval academy, it will mean the accomplishments of their predecessors, including Azuma, have been recognized.