SEOUL -- U.S. President Donald Trump and North Korean leader Kim Jong Un, a little more than a week away from their high-stakes summit, are worlds away from the mocking jabs and verbal threats they were hurling at each other last year.

Six aides pushed and pulled, talked and stopped talking to bring this change about. In the past week or so, some traveled thousands of miles to meet with one another. Their back and forth encounters swung from threatening to pull out of the meetings to acknowledging how critical the summit is to both countries. Here are brief sketches of who these matchmakers are and what they did to help bring about "the deal of the century."

The vice chairman of North Korea's governing Workers' Party is the right-hand man of Kim Jong Un. He has been at the center of Pyongyang's negotiations with the U.S. and South Korea, accompanying Kim Jong Un to his meetings with U.S. Secretary of State Mike Pompeo and South Korean President Moon Jae-in.

On Friday, Kim Yong Chol delivered a letter from Kim Jong Un to Trump at the White House. After reading the letter, the U.S. president revived the summit he had publicly scrapped eight days earlier. Kim, a former chief of the North Korean military's spy agency, was a longtime hardliner against South Korea and the U.S.

So much so that the U.S. has banned Kim Yong Chol from traveling to the U.S. Last week, Washington issued a waiver so Kim could complete his diplomatic mission. Perhaps Kim was just as surprised at finding himself in Washington as he was about where he landed in February -- in South Korea, as part of the North's delegation to the Pyeongchang Winter Olympics.

History offers perspective as to why North Korea participating in an Olympiad hosted by its arch nemesis would be surprising. In November 1987, North Korean terrorists planted a bomb aboard Korean Airlines flight 858, on its way from Baghdad to Seoul with two stopovers. The device exploded while the jetliner was over the Andaman Sea. All passengers and crew, more than 100 people, died. The lone surviving terrorist later admitted the act was part of a plot to try to disrupt the 1988 Seoul Olympics by scaring away athletes. Few would deny that the U.S. secretary of state played the key role in making the unprecedented U.S.-North Korea summit happen. The former CIA director twice visited Pyongyang to discern how serious Kim Jong Un is about denuclearization.

Kim praised Pompeo for "having the same kind of guts" as himself, recognizing the American's boldness and negotiating skill. Pompeo successfully set the table for the historic meeting, calming worries that the hawkish former congressman was not suited for the job.

Pompeo also proved to be compatible with Kim Yong Chol as the former spy chiefs chiseled away at the denuclearization issue. In addition, he managed Trump's abrupt cancellation of the summit with a deft touch that allowed the two sides to continue talking until the U.S. president, eight days later, said the summit would go ahead after all as scheduled in Singapore on June 12.

Trump has said his secretary of state brings two important traits to his work. "I have worked with Mike Pompeo for quite some time," Trump told reporters in March when he made the appointment, "tremendous energy, tremendous intellect."

Pompeo graduated first in his class at the Military Academy at West Point and went on to Harvard Law School. 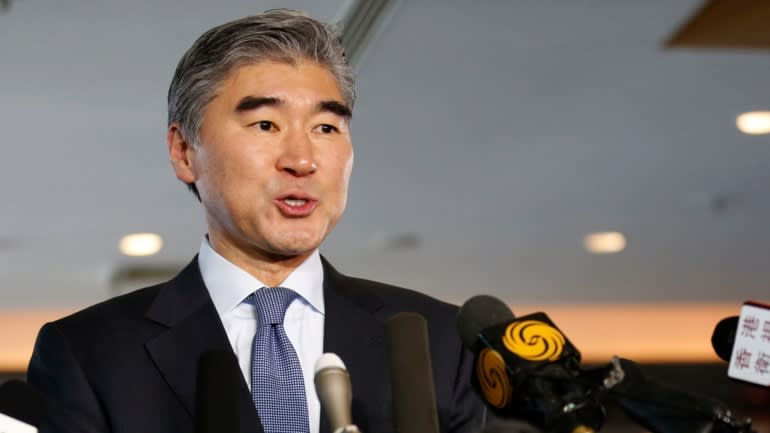 Sung Kim, then a special representative for North Korea policy, speaks to reporters in Beijing in 2014.   © Reuters

The veteran U.S. diplomat has much experience negotiating with North Korea. Now the U.S. ambassador to the Philippines, Sung Kim last week was dispatched to meet his North Korean counterpart Choe Son Hui at the border village of Panmunjom. They discussed how a denuclearization process might work, the dismantling of Pyongyang's nuclear warheads and Washington's guarantees for the Kim regime.

The U.S. has few diplomats who know North Korea well; many North Korean experts have left the Department of State. Joseph Yun, the country's special representative for North Korea policy and deputy assistant secretary for Korea and Japan, retired in March, after more than three decades of service.

Yun's departure reflects widespread frustration among American diplomats at their lack of sway in the Trump administration, according to the Washington Post.

North Korea's vice foreign minister specializes in negotiating with the U.S. She worked as an interpreter during the so-called "six-party talks," which made little headway from 2003 to 2007. Although her title was "interpreter," some saw her as the North Korean delegation's power broker.

Choe, an experienced diplomat, upset Trump by calling U.S. Vice President Mike Pence "ignorant and stupid" after Pence made comments that North Korea perceived as a threat. Choe's remarks were still hanging in the air on May 24 when Trump canceled the summit.

President Moon's national security adviser is a lifelong diplomat. As Moon's special envoy, Chung in March met with Kim Jong Un in Pyongyang to draft Kim's agreement on the inter-Korean summit, which took place in April. Chung is the one who carried Kim Jong Un's message to Trump that the North Korean leader wished for a summit with the U.S. president. Trump almost immediately agreed to the summit, with barely any input from his top advisers.

The Harvard-educated diplomat speaks fluent English and is an uncle of Andrew Kim, the head of the CIA's Korea Mission Center. The nephew accompanied Pompeo in New York last week while the secretary of state was meeting with Kim Yong Chol.

The U.S.'s hawkish national security adviser has pressured North Korea to completely abandon its nuclear arms. He began the firestorm that Pence and Choe would later step into by mentioning the "Libya model," shorthand for unilateral disarmament. He is the last person North Korea wants to talk with and has been a frequent target of Pyongyang's ire.

Bolton seems to be playing a diminished role now that the summit is back on. But he could regain his influence -- and outspokenness -- if the summit process falters.