Trump-Kim summit ends with no agreement

'We had to walk away,' US leader says as denuclearization hopes fade 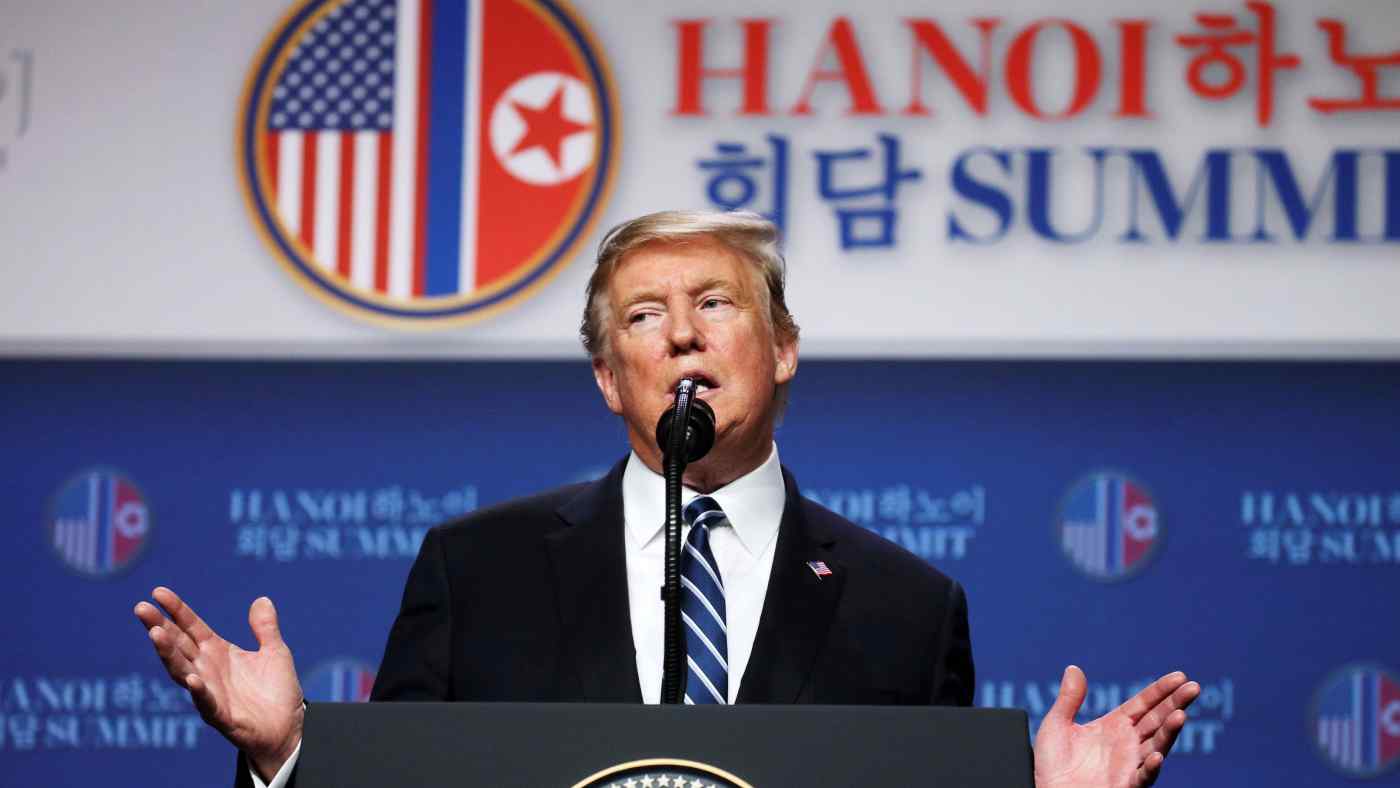 HANOI -- U.S. President Donald Trump and North Korean leader Kim Jong Un failed to reach an agreement in their nuclear talks on Thursday because Pyongyang insisted on full relief from punishing sanctions, the American leader explained at a news conference.

"Basically, they wanted the sanctions lifted in their entirety, but we couldn't do that. ... We had to walk away from it," Trump said in the Vietnamese capital, shortly after the summit was cut short. The leaders had been scheduled to have lunch and sign some kind of agreement, but those plans were abruptly scrapped.

The summit was supposed to make headway toward the "complete denuclearization" of the Korean Peninsula, which Trump and Kim had agreed to pursue at their first meeting in Singapore last June. Washington wants Pyongyang to abandon its nuclear weapons program, while the North is seeking economic assistance and a peace deal.

Accompanying Trump at the news conference, U.S. Secretary of State Mike Pompeo stressed that progress was indeed made, but that the North was unwilling to go far enough. "We asked [Kim] to do more," Pompeo said. "He was unprepared to do that."

Trump said Kim was willing to abandon North Korea's Yongbyon nuclear complex, but would not budge on other sites. The president said the talks ended in a "friendly" manner but gave no timetable for a third summit.

Kim reportedly had a pained expression on his face as he left the historic Sofitel Legend Metropole hotel, where the two-day summit was held. This was in stark contrast to the jovial mood earlier in the day, when a smiling Kim had stressed he was willing to denuclearize. "If I was not," he told reporters, "I wouldn't be here."

After the news conference, Trump quickly left Hanoi aboard Air Force One.

Despite the collapse of the talks, representatives from both countries "look forward to meeting in the future," the White House said in a statement.

Still, the turn of events in Hanoi is a blow to Trump, who is under heavy legal pressure at home after his former personal attorney Michael Cohen testified against him in Congress. The summit disappointment is also likely to sting South Korean President Moon Jae-in, who has been vocally encouraging the process as a mediator.

Moon is scheduled to announce what his government calls a "New Korean Peninsula Policy" on Friday, but the outcome of the Trump-Kim talks may force the liberal South Korean leader to recalibrate his strategy.

South Korean stocks fell sharply on the news that there was no deal. The benchmark Kospi dropped 1.76% to end the day at 2,195.44.