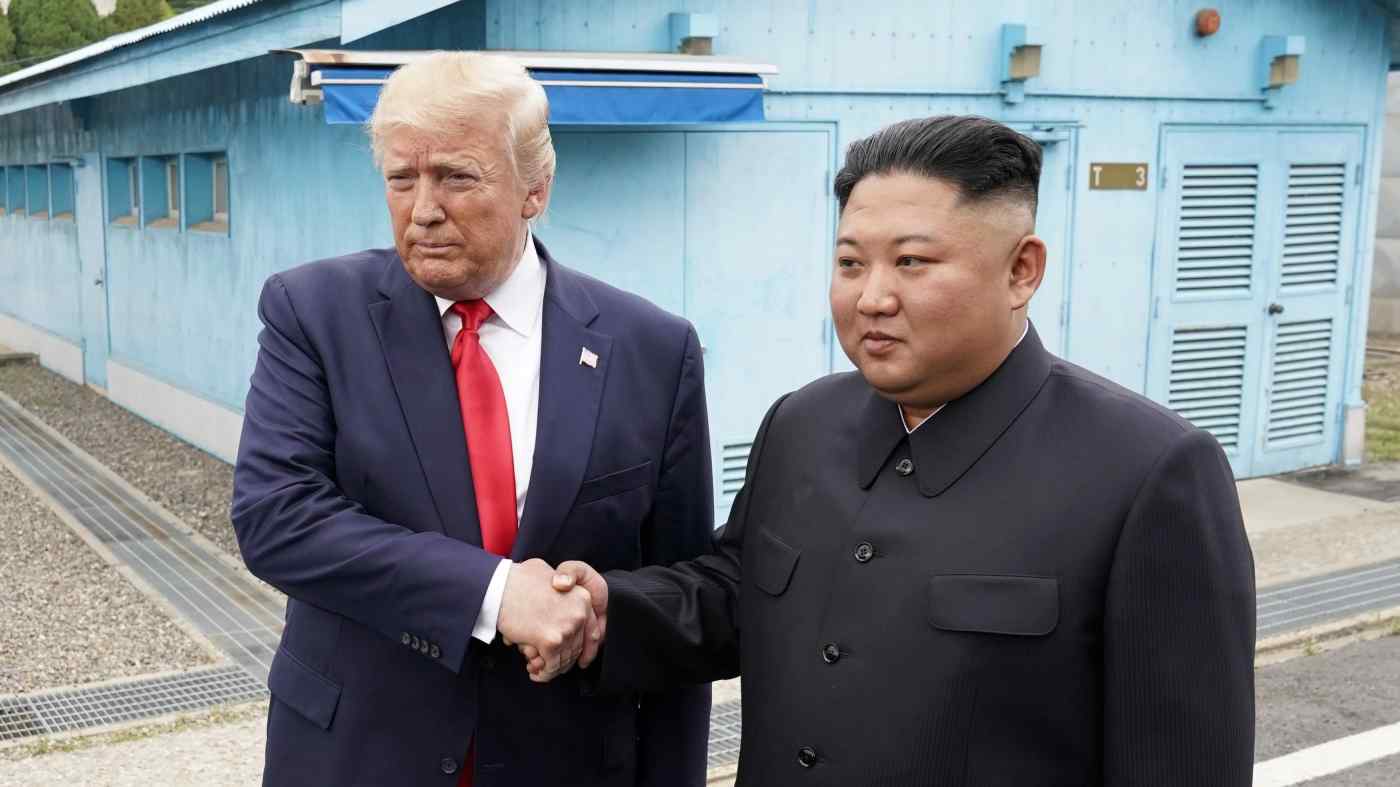 SEOUL -- Donald Trump on Sunday became the first sitting U.S. president to enter North Korea when he stepped over the border to greet North Korean leader Kim Jong Un in the Demilitarized Zone between the two Koreas.

The two leaders agreed to restart the denuclearization talks, frozen since February after the collapse of the last summit in Vietnam, in few weeks.

Trump and Kim met for the third time at the peace village of Panmunjom, the site of the demarcation line drawn as the Korean War ended in 1953. They first met in Singapore in June last year.

"I never expected to meet you at this place," Kim told Trump, as they greeted each other at the demarcation line.

"I'll invite him to the White House right now," Trump said. It is unclear if this is considered an official invitation.

The pair then went over to the South side, where they briefly chatted and spoke to the media before greeting South Korean President Moon Jae-in.

"Stepping over that line was a great honor," Trump said. "A lot of really positive things are happening," stressing that he liked Kim from the first time they met.

"I'm sure our special relations will lead to good results," Kim said. "I'm sure our good relations have a mysterious power that can overcome difficulties."

Trump and Kim then entered closed door talks in the House of Freedom on the South side of the DMZ. After his meeting with Kim, Trump said the leaders agreed to restart the talks on denuclearization of the Korean Peninsula. "We've agreed that we're each going to designate a team. The teams will try to work out some details," Trump said.

As for the negotiating team on the U.S. side, Trump said that Stephen Biegun, special representative for North Korea, and Secretary of State Mike Pompeo would lead the team. Trump also said he will join them "over the next two or three weeks."

But Trump also made clear that the sanctions imposed on North Korea will remain in place.

Speaking earlier at a military camp in the DMZ before the meeting, Trump said: "This was a scheduled visit [to the DMZ] from a number of months ago. Then yesterday I had the idea that I'd call on President Kim and say hello."

At an earlier news conference with Trump in Seoul, Moon said "many South Koreans appreciate and support President Trump's role of peacemaker."

Analysts say the meeting may help pave the way for resuming denuclearization talks that have been at a stalemate since the collapse of leaders' summit in Hanoi in February. Trump said that Kim was not ready for a deal at the time, and walked away from the negotiation table.

"This display by Trump and Kim of their desire to continue a dialogue would likely generate enough fresh momentum behind engagement to increase the likelihood that talks on denuclearization and related issues restart in the coming weeks," said Scott Seaman, a director at Eurasia Group, a U.S.-based think tank.

"A resumption of talks would in turn reduce the risk that the North regime engages in provocations -- such as ballistic missile tests -- which aggravate tensions," Seaman added.

Some observers say that Trump proposed the meeting to boost his 2020 reelection campaign rather than seriously resolving tensions on the Korean Peninsula.

"Trump's offer to meet Kim Jong Un at the DMZ is emblematic of why the Trump North Korea effort is a farce: thrown-together; last-minute; made-for-TV; driven by Trump's lust for optics and drama of the DMZ rather than substance; in pursuit of a photo-op for the 2020 election," said Robert Kelly, a professor of political science at Pusan National University in Busan.