Trump and Kim plan 20-minute bilateral to kick off meetings 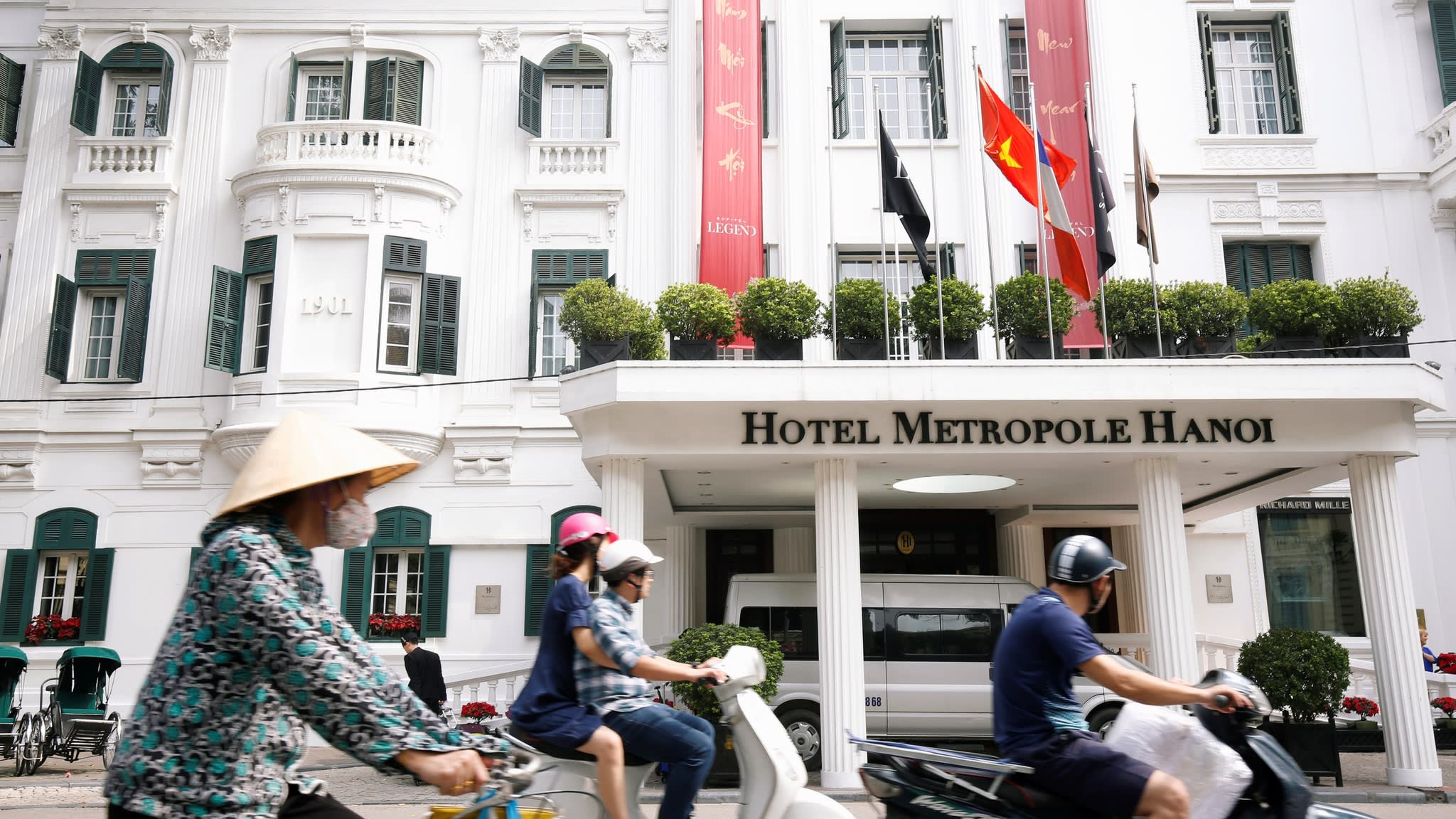 The French-colonial-era Sofitel Legend Metropole Hotel will be the venue, where they will seek to agree on steps to secure North Korea's denuclearization.

The details were disclosed as the two leaders arrived in the Vietnamese capital on Tuesday, where thousands of security personnel have been deployed to ensure the second such summit goes off without a hitch.

"Just arrived in Vietnam," Trump tweeted upon arrival. "Thank you to all of the people for the great reception in Hanoi. Tremendous crowds, and so much love!"

Trump flew to Hanoi on Air Force One, landing at around 9 p.m. that day. He headed directly to the hotel where he will be staying for the summit.

Kim arrived earlier in the day, becoming the first North Korean leader to travel to Vietnam since his grandfather, Kim Il Sung, visited in 1964 and met with Ho Chi Minh.

Kim Jong Un rolled into Hanoi in a black bulletproof Mercedes-Benz limousine, escorted by police motorcycles. Crowds along the streets welcomed him by waving North Korean flags. At around 11 a.m., the motorcade arrived at the plush Melia Hotel, where Kim was greeted by Hanoi City Chairman Nguyen Duc Chung.

On Tuesday morning, Kim had arrived by train at Vietnam's Dong Dang railway station, on the border with China. This concluded a 4,000 km journey from Pyongyang that took about 60 hours.

Kim and his entourage -- including sister Kim Yo Jong, Workers' Party Vice Chairman Kim Yong Chol and more than a dozen bodyguards -- disembarked and were met by Vo Van Thuong, secretary of the Vietnamese Communist Party's Central Committee. Then they were off to Hanoi, another two-hour, 170 km drive away.

The atmosphere in the city is festive, with ubiquitous sets of North Korean, U.S. and Vietnamese flags flying together. But security is also overwhelming.

The Vietnamese authorities banned traffic on the national road from Dong Dang station to Hanoi on Tuesday, prompting some companies, including Canon, to take the day off since workers were unable to commute.

An hour before Kim's arrival, Vietnamese policemen went around asking residents living along his route to close their doors and windows. Security guards can be seen all over the city center, some equipped with armored vehicles.

The bulk of the discussion on denuclearizing the Korean Peninsula is expected to take place on Thursday. The two sides still appear far apart on how to deliver the "complete denuclearization" the leaders agreed on at their historic first summit in Singapore last June. With no sign that Pyongyang is willing to make major concessions, the Trump administration has been trying to temper expectations.

Vietnam, for its part, is hoping to promote itself as a viable host for major international events. To make the summit a success -- at least logistically -- the Public Security Ministry has mobilized all its resources in Hanoi and nearby areas. It is also cooperating with the Ministry of Defense and other security organs.

At least 2,000 uniformed security agents have been deployed at all five-star hotels and the heart of the capital. Plainclothes guards and agents have also been dispatched to certain hot spots.

Security at some special locations has been cranked up to the highest level. The list includes the Government Guesthouse -- the planned summit venue -- along with the Sofitel Legend Metropole hotel, the Melia Hotel, the JW Marriott Hotel, Noi Bai International Airport and Gia Lam military airport.