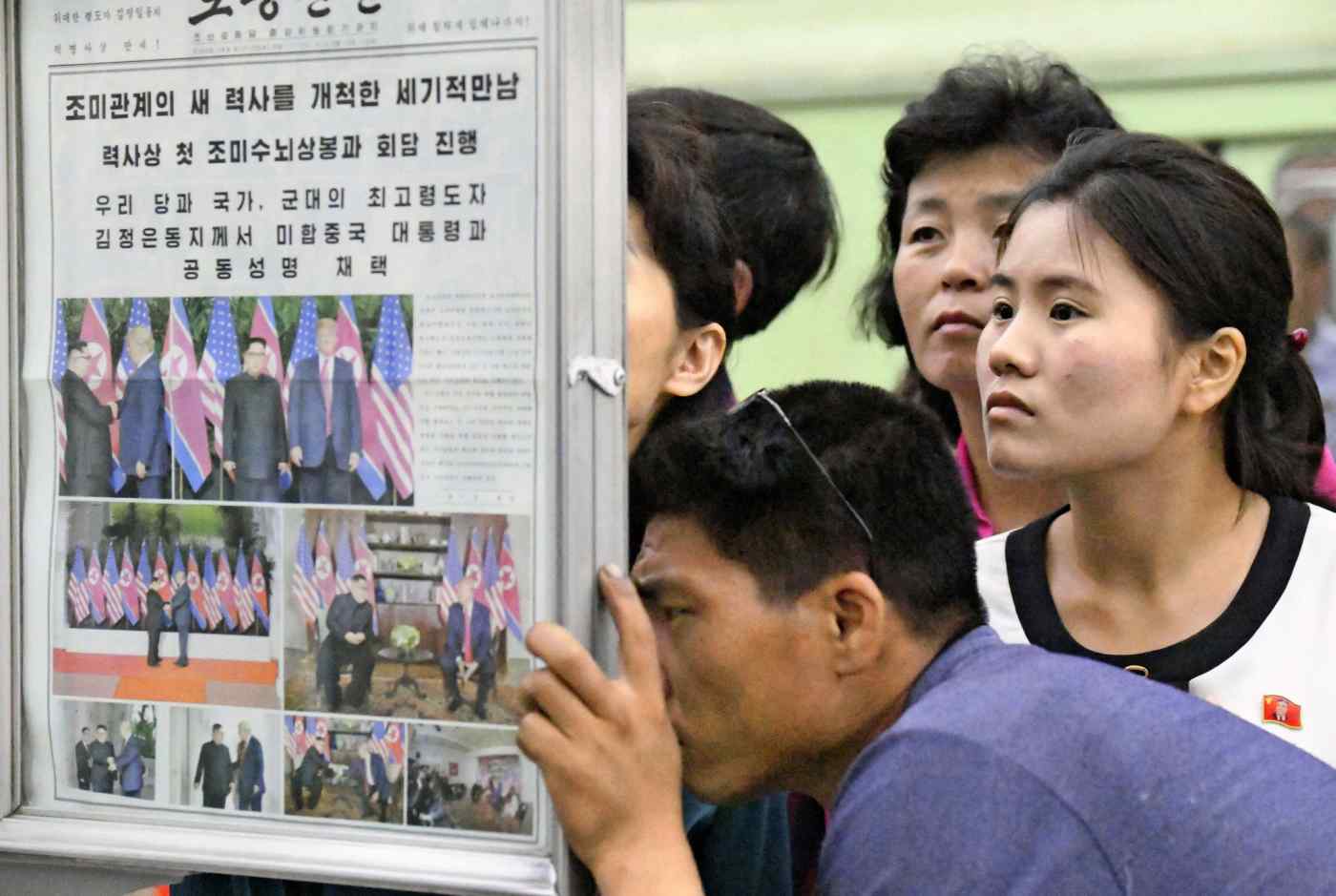 SINGAPORE/NEW YORK -- North Korea is "no longer a Nuclear Threat," U.S. President Donald Trump tweeted on Wednesday morning. "Just landed -- a long trip, but everybody can now feel much safer than the day I took office," read the post.

If Trump's tweet is to be believed, the first-ever summit between the two nations' leaders was a success for the world. But it is quickly becoming clear that there are differences in interpretation of the joint statement signed on Tuesday by Trump and North Korean leader Kim Jong Un.

Kim committed to "complete denuclearization of the Korean Peninsula" at his summit with Trump in Singapore on Tuesday. Yet this merely reaffirms Kim's pledge to South Korean President Moon Jae-in when they met in April, and falls far short of the "complete, verifiable and irreversible denuclearization" sought by the U.S., which some had expected going in.

It is even weaker than the statement produced in 2005 at six-party talks targeting North Korea's "verifiable denuclearization," in which Pyongyang, under Kim's father Kim Jong Il, "committed to abandoning all nuclear weapons and existing nuclear programs." Verification is not mentioned in Tuesday's document.

At an event at the Asia Society in New York on Wednesday, Daniel Russel, a former assistant secretary of state for East Asian and Pacific affairs, said that "there is not one gram of fissile material either moving out or likely to move out of North Korea."

Trump acknowledged at a news conference following the summit that "it takes a long time" for a country to denuclearize completely, undercutting expectations that the U.S. would press for rapid compliance.

Kim seems happy with the result. His government's Korean Central News Agency reported on the summit on Wednesday, far more quickly than is the norm. The two leaders agreed that "it is important to abide by the principle of step-by-step and simultaneous action in achieving peace, stability and denuclearization of the Korean Peninsula," according to KCNA. The mention of a "step-by-step" process suggests the North will receive some reward, such as the easing of economic sanctions, for each action it takes -- an arrangement that could let Pyongyang buy time for further weapons development. Though U.S. Secretary of State Mike Pompeo is expected to meet with senior North Korean officials next week to fill in the details of denuclearization, it is unclear whether the two sides will be able to agree on a plan for swift and meaningful progress.

Kim "walked away from this summit with propaganda gold without promising anything concrete in return," said Jean Lee, director of the Wilson Center's Hyundai Motor-Korea Foundation Center for Korean History and Public Policy, in a conference call hosted by the Wilson Center on Wednesday.

By being put on a par with Trump, the president of what is arguably the "world's most powerful country," Kim is strengthened as a leader and will likely be emboldened in carrying out his policies going forward, Lee said.

Russel said that Kim managed to secure, in a short period of time, bilateral negotiations with a number of countries, succeeding in breaking up the solidarity of countries against him that was firmly in place just months ago. "[It] creates a dynamic where people will come to his door bringing gifts," he said. North Korea's ballistic missile program went unmentioned in the leaders' statement, despite frequent missile testing through last year. Trump, in his press conference, cited Kim saying that a testing ground for missile engines would be destroyed. But the North is said to possess as many as 1,000 missiles already, and has deployed midrange rockets capable of striking Japan and South Korea.

Destroying testing facilities could be seen as a move to halt development of intercontinental ballistic missiles, which the North is close to perfecting. But the U.S. previously agreed with Japan to press for the abandonment of all programs involving ballistic missiles and weapons of mass destruction. For Trump to leave the issue of shorter-range missiles unaddressed could strain relations with Japan and South Korea.

Kim said at the meeting that the U.S. and North Korea "should commit themselves to refraining from antagonizing with each other out of mutual understanding, and take legal and institutional steps to guarantee" peace and stability, according to KCNA. Pyongyang appears eager to start negotiations on turning the armistice that halted the Korean War in 1953 into a formal peace treaty. Kim also urged Trump to halt "irritating and hostile military actions" against the North, according to KCNA. Trump said after the meeting that the U.S. will suspend joint military exercises with the South that have long kept Pyongyang on edge. If the U.S. continues over time to compromise in response to North Korea's demands, America's military presence on the Korean Peninsula is likely to wither away, with substantial consequences for the balance of power in East Asia.

Such a scenario is expected to benefit China, experts said.

"China got everything it wants out of the summit," said Robert Daly, director of the Kissinger Institute on China and the United States, in the Wilson Center's conference call.

With Trump's announcement of an end to "provocative" war games, China gets the freeze-for-freeze deal it has advocated for years, in which North Korea halts ballistic missile and nuclear tests in exchange for an end to U.S.-South Korea joint military exercises.

"As much as this is a negotiation about the North's nuclear weapons and ballistic missiles, it's also about who controls the future of Asia," said Sherman, who called the end of joint military drills part of "China's dream."