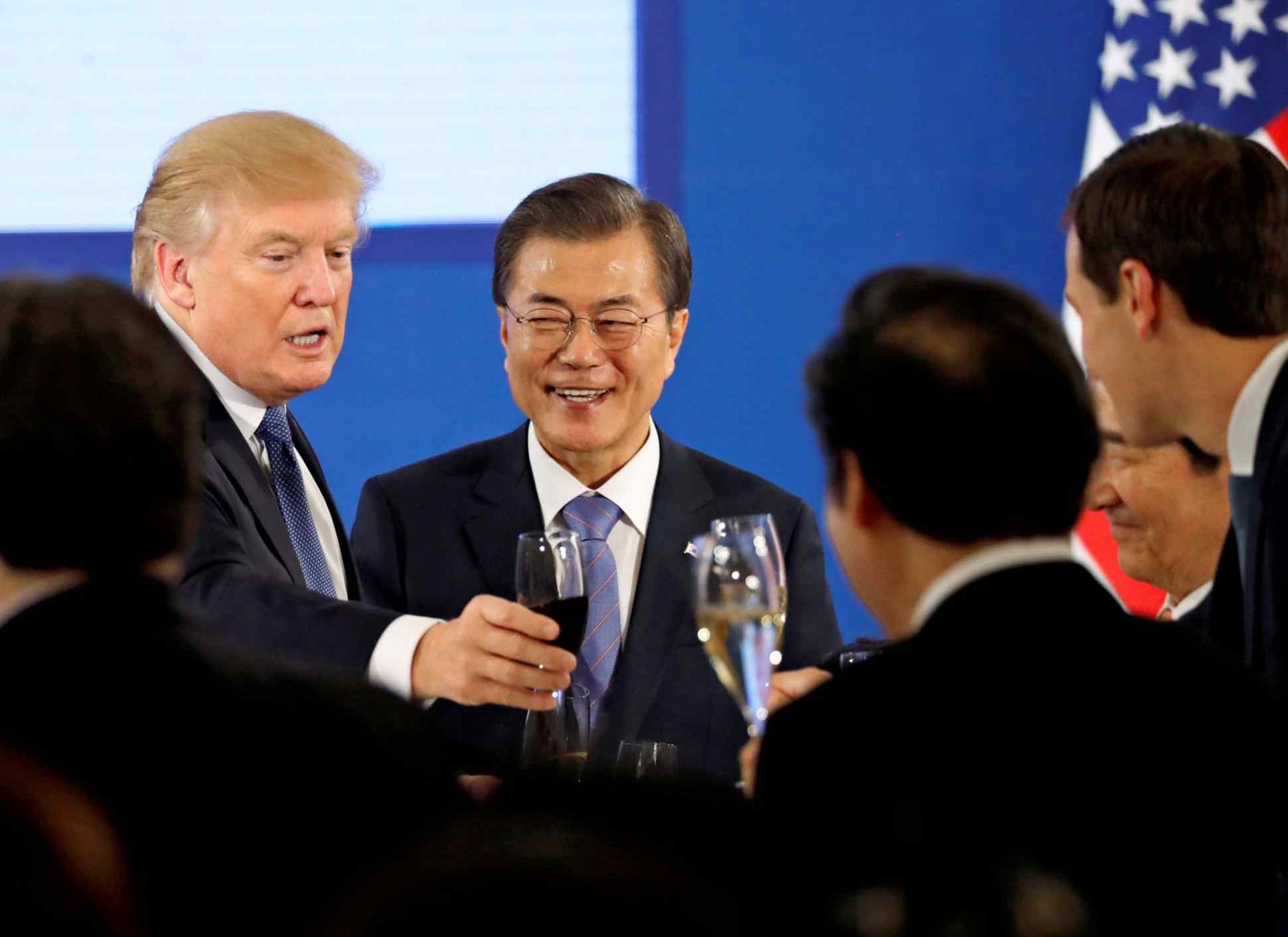 Holding on to military card, US leader still out of step with South Korea's Moon

SEOUL -- U.S. President Donald Trump on Tuesday suggested that North Korea "come to the table and make a deal" toward ending its nuclear program, but by retaining the option of using force he remains on a different page from South Korean counterpart Moon Jae-in.

Trump spoke to reporters at Seoul's presidential Blue House following meetings with Moon during his first state visit to South Korea. The two agreed to seek a peaceful solution to North Korea's nuclear and missile development, Moon said. But Trump stressed that America still "stands prepared to defend itself and its allies" and did not rule out "using the full range of our unmatched military capabilities if need be."

The U.S. president described Pyongyang as "a worldwide threat that requires worldwide action," noting that America had deployed three aircraft carriers and a nuclear-powered submarine to the vicinity of the Korean Peninsula. But the hope is "we never have to use" such forces, Trump said.

"It makes sense," he continued, for Pyongyang to hash out "a deal that's good for the people of North Korea and the people of the world."

"I believe it makes sense for North Korea to do the right thing," he said.

Moon said he and Trump "reaffirmed a strategy of increasing maximum sanctions and pressure until North Korea voluntarily abandons" its nuclear program and agrees to talks. The leaders also agreed to remove weight caps on warheads for South Korea's ballistic missiles.

Prior to the news conference, Trump met Moon at the U.S. military base Camp Humphreys, south of Seoul, and received a briefing on the North Korean situation from an American military official. The U.S. president appeared upbeat about the issue, saying there were lots of good options and that "ultimately, it will all work out."

Trump's relatively muted criticism of Pyongyang and hints at dialogue were a departure from previous remarks, including an October tweet saying the U.S. secretary of state was "wasting his time trying to negotiate" with the rogue nation. The softer tone appeared to be a show of consideration for South Korea.

Moon likewise made a display of cooperation, in part by becoming the first South Korean president to meet a U.S. counterpart at an American military base. He reminded American soldiers at Camp Humphreys that their countries "shed blood together in our most difficult time," referring to the Korean War in the early 1950s.

Building a framework to turn up the pressure on North Korea is one of the major themes of Trump's Asia tour. He began with Japan, strengthening his foothold with Prime Minister Shinzo Abe, who was for the most part on the same page. The aim was to continue on to South Korea and affirm ties between all three countries, a plan clearly made with an eye to Thursday's talks with Chinese leader Xi Jinping, a key player in the situation.

But the U.S. will have a tough time building the same solidarity with the Moon administration as it enjoys with Japan, given Seoul's delicate situation caught between Beijing and Washington. Trilateral relations between the U.S., Japan and South Korea will likely remain fragile.

Later in the evening, the South Korean government invited a former wartime "comfort woman," to a state banquet it hosted for Trump. The attendance of 88-year-old Lee Yong-soo, who had openly criticized Japan's handling of the issue, prompted the Japanese government to call out Seoul's move as "inappropriate."

A South Korean official said, however, that it was just the part of the government's efforts to ensure a "balanced viewpoint" in the U.S. leadership regarding the "historical issue" between Japan and South Korea -- the two countries that Trump has visited so far on his trip.