Trump promotes a 'pivot in Asia' 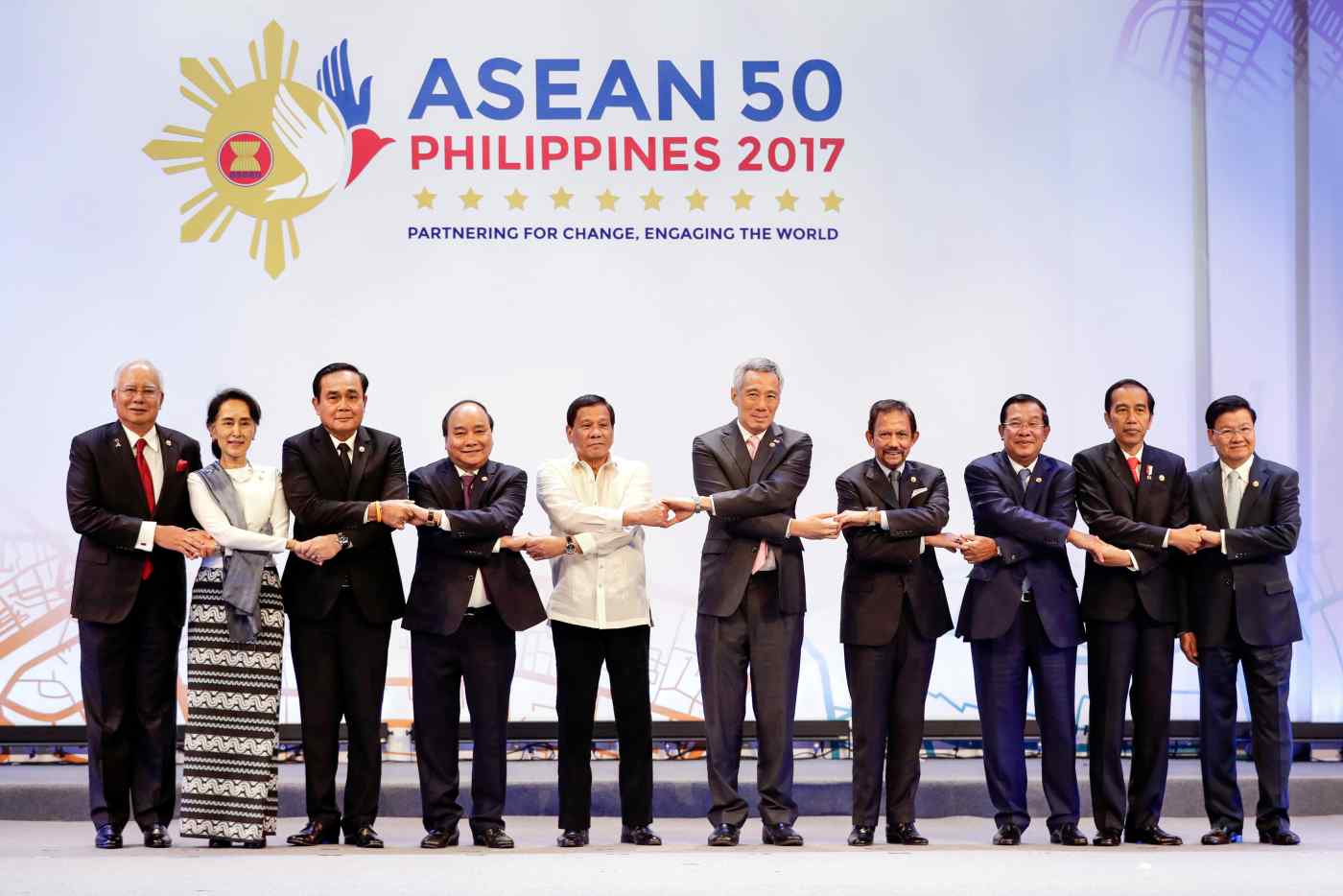 ASEAN leaders discussed how to deal with China and U.S. President Donald Trump during a summit in Manila on April 29.
CopyCopied

It was bound to happen. With one brief trans-Pacific phone call to Thai Prime Minister Prayuth Chan-ocha, U.S. President Donald Trump replaced the playbook that has governed U.S.-Thai

relations over the past decade with one that is likely to reorient America's geostrategic aims in Asia during the course of his administration. While his predecessor President Barack Obama was noted for rebalancing U.S. resources and interests from the Atlantic to the Pacific, known as the "pivot to Asia," Trump's geostrategic turn may be dubbed a "pivot in Asia."

Under Trump, America's geopolitical preoccupations remain unchanged, dominated by the Middle East quagmire, Islamic State group-inspired terrorism, the European Union's tribulations, and headline hotspots elsewhere. But while Trump's focus on Asia has been confined so far to North Korea's nuclear and missile programs, his discussion with Prayuth, in conjunction with similar calls with Rodrigo Duterte, the Philippine president and current chair of the Association of Southeast Asian Nations, and Singapore Prime Minister Lee Hsien Loong, signal an overdue rebalancing between U.S. interests and values.

Trump is unlikely to be as fixated on human rights and democracy as Obama, whose administration repeatedly called on Thailand to resume elections and popular rule as soon as possible. When Prayuth in May 2014 led Thailand's 13th successful coup in 85 years, Washington automatically responded with sanctions and a general downgrade in the bilateral treaty alliance, spearheading similar reactions by other democratic countries, including Japan.

Although it remained cordial, the relationship between the U.S. and Thailand, Washington's oldest friend in Asia for more than 180 years, was conspicuously strained. Obama met with Yingluck Shinawatra, Thailand's last elected leader, more frequently than with Prayuth, who saw Obama only occasionally on the sidelines of broader multilateral meetings.

But Trump is different. In his inauguration speech last January, he declared that "we do not seek to impose our way of life on anyone." Trump's pivot in Asia centers on a shift toward interests from values. It is not as if human rights and basic freedoms will be abandoned altogether in favor of American interests in Asia, but the ordering sequence and policy nuances will follow a different tack. Since Trump has been accused of authoritarian tendencies in violating civil liberties at home, he is not well-positioned to preach about rights and freedoms abroad.

The rebalancing of Trump's preference for interests over values chimes with the election victory last year of Duterte, whose strongman instincts, strong-arm tactics in his deadly war on drugs and overall governing style have violated human rights and fundamental freedoms. As U.S. criticisms of his human rights record mounted, bilateral relations degenerated into vulgarity when the tough-talking leader in Manila called Obama a "son of a bitch" in September and later made similarly derogatory remarks about the EU.

With the Philippines and Thailand as America's only security treaty allies in Southeast Asia, Duterte's showmanship and rough methods have made Prayuth look less deplorable by comparison. Suddenly, Thailand's military government is not the only one in the region with a shoddy human rights reputation. The death toll of more than 7,000 in Duterte's war on drugs dwarfs the Prayuth regime's detention of several hundred dissenters and critics for "attitude adjustment" in military barracks for up to a week.

Trump's treatment of the Philippines and Thailand shows how he will deal with Southeast Asian countries and ASEAN as a whole going forward. Trump's telephone calls to Prayuth, Duterte and Lee were designed to rally U.S. allies and partners in ASEAN as Washington further isolates North Korea and weighs its options in responding to Pyongyang's nuclear and missile programs. Trump also has reached out to Chinese President Xi Jinping with regular contacts, culminating in a tete-a-tete in Florida in April.

When it comes to Asia, Trump's attention is still all about the North Korean nuclear threat to South Korea and Japan, another pair of U.S. treaty allies in Asia, and to the U.S. itself if North Korean leader Kim Jong Un succeeds in developing a ballistic missile that can reach that far.

ASEAN is beginning to loom larger in the view of U.S. officials. Trump's recent phone calls from afar were sweetened with personal invitations for both Prayuth and Duterte to visit the White House. The Thai leader leaped on the opportunity by putting Washington on his travel itinerary, probably before Trump visits the region. It would not be surprising if Duterte later accepts Trump's invitation as well, despite his initial coy response of having to check his scheduling commitments.

Moreover, both U.S. Secretary of State Rex Tillerson and Vice President Mike Pence have openly courted ASEAN's cooperation to politically ostracize and economically cripple the Pyongyang regime, in a squeeze that could see Kim ousted from within or coerced into changing his policy on nuclear and missile development. Pence also assured ASEAN recently that Trump will visit the region for ASEAN-led summits in November.

ASEAN's importance is likely to grow for Trump. The focus and efforts of his attention bode well for ASEAN's own search for a new regional balance in response to China's expansion in the South China Sea. Although the Philippines won a comprehensive landmark ruling by the Permanent Court of Arbitration in The Hague in July 2016, Duterte has gambled by putting aside his country's international law victory in favor of a bilateral deal with China.

He was instrumental in excluding the ruling from being mentioned in the recent joint statement issued at the 30th ASEAN Summit in Manila, which he chaired. Central to his bilateral deal is China's willingness to agree to a set of rules for regional maritime behavior and actions, known as the Code of Conduct on the South China Sea. If China reneges, or dilutes these deliberations to the point of ineffectiveness, Duterte will have miscalculated.

Either way, there is ample room for the U.S. under Trump to help the regional states rebalance their collective weight vis-a-vis China. ASEAN states also welcome the working relationship between Trump and Xi, but they do not want a far-reaching U.S.-China agreement that undercuts their interests in maintaining regional autonomy and territorial integrity. Trump's pivot in Asia, from altering the balance between values and interests to reaffirming ASEAN's role in Washington's geostrategic calculus, could be the real rebalancing that Southeast Asia has been looking for.