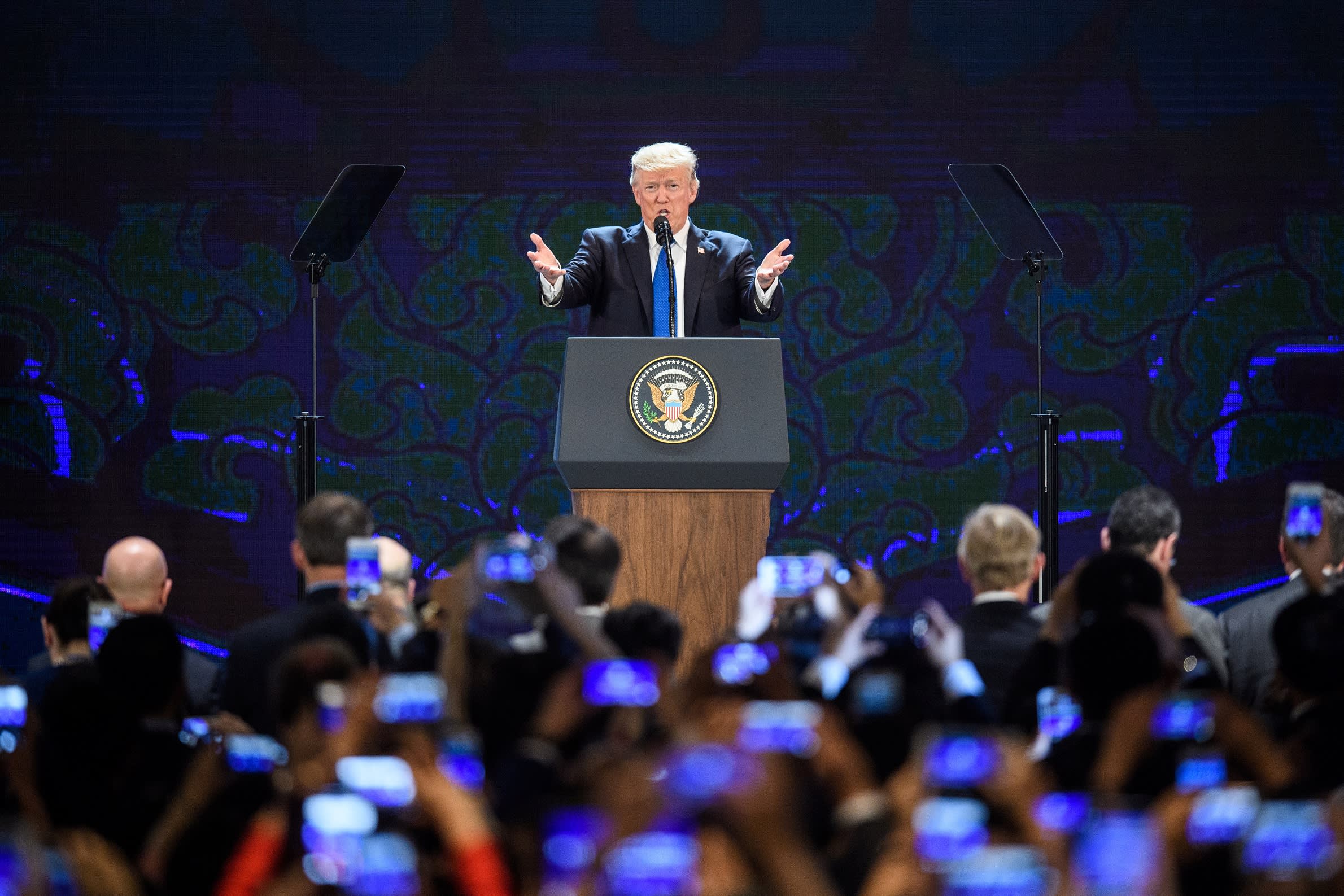 Signs of this were evident during his tour through Asia on Nov. 5-14.

During his visit, he strengthened ties between the U.S., Japan and South Korea while reaffirming China's cooperation on the North Korea issue. Another goal was of greater importance -- restoring American influence to prevent the emergence of China as leader of the Asia-Pacific region. Trump trip showed how China and the US can work together

Vietnam's leader urges a US return to the TPP

Unfortunately, that goal has exposed Trump's limitations, because his Nov. 10 speech on his Asian strategy, which drew keen interest, failed to reassure nervous nations.

Trump's high-profile speech in Danang, Vietnam, was seen as a chance to clarify his administration's Asia policy, something he has been unable to do since his inauguration in January. It was also regarded as an opportunity to sell his policy for the Indo-Pacific region to the world.

In mid-October, the principals committee of the National Security Council, a top gathering of cabinet-level members, met quietly at the White House to formulate a comprehensive strategy for the U.S. vis-a-vis the Asia-Pacific region, according to multiple sources. Following discussions between Trump's National Security Adviser H.R. McMaster, Defense Secretary James Mattis and Secretary of State Rex Tillerson, it was agreed to promote a free and open Indo-Pacific as the core of the administration's Asian policy.

Trump, who was filled in on the details later, decided to adopt it and announce the policy in Danang.

Trump's strategy is aimed at strengthening economic and security ties with countries that want to promote the rule of law and the market economy -- a policy advocated by Japanese Prime Minister Shinzo Abe in August 2016.

In a word, the Trump administration hopes to piggyback on Abe's plan.

Specifically, Japan, the U.S., Australia, India and other nations look to counter China's Belt and Road Initiative, a project aimed at creating Beijing's zone of economic influence by improving infrastructure in the region.

Trump's Nov. 10 speech, however, disappointed many. The first half went smoothly enough, with Trump saying that the U.S. wanted to partner with other nations to realize a free and open Indo-Pacific region.

However, the latter half of the president's speech was peppered with "America first" sloganeering that many attendees found off-putting.

After proclaiming that the U.S. will not take part in multilateral accords that will bind his country, Trump doubled down, asserting that he will always put America first.

The president stressed that he will conclude bilateral trade deals only with countries that abide by the principle of fair and reciprocal trade. To further dismay, on Nov. 14, Trump canceled his appearance at the East Asia Summit -- a gathering of 18 countries including Japan, China, Russia and the 10 members of the Association of Southeast Asian Nations -- flying home after the summit had been delayed by nearly two hours.

A Southeast Asian group expressed their disappointment, saying that Trump, as expected, intends to push his "America first" policy even at the expense of U.S. relations with its Asian partners.

As a result, the chairman's statements at the ASEAN and East Asia summits, released on Nov. 16 and 21, respectively, appeared to have caved to pressure from China, with ASEAN dialing back its criticism of Beijing's military bases in the South China Sea, compared to last year's more strongly worded statements.

A further continuation of this trend could lead to the retreat of the U.S.-led Asian order, giving way to one dominated by China.

Two conclusions can be inferred from Trump's Asian tours.

One is that Trump is not really serious about the Indo-Pacific policy. Or that if he is, his somewhat contradictory speech at Danang reflected his consideration for China.

The second presumes that Trump, in order to please his constituency back home, deliberately emphasized trade policy that prioritizes U.S. interests

Although there may be something to the first conclusion, it does not explain the entire story.

Trump apparently knew of the significance of his Indo-Pacific policy after receiving explanations from Abe. He may have considerations for China, but not to the extent of cozying up to Beijing by watering down his speech.

The president has repeatedly expressed high regard for Chinese President Xi Jinping, but holds an increasingly harsh view of China. According to sources close to the administration, Trump tells his aides that Xi is a great leader, but that his country is problematic.

The second conclusion, therefore, seems more likely to be correct: Trump had been deeply preoccupied with domestic affairs during his trip through Asia.

While in the region, a spate of events at home seemed to plague the president. A Nov. 5 poll by The Washington Post found his approval rating had dropped to 37% -- the lowest for any president at this point in office in the past 70 years. Two days after that, a Republican candidate suffered a crushing defeat in the Virginia gubernatorial race. Then, on Nov. 9, a tax-cut bill -- one of Trump's key campaign issues -- reached a crucial junction.

Although about 80% of Republicans still back Trump, his desperation at maintaining his weakening domestic base forced him to pitch America as his top priority, even while trying to court Asian leaders.

This tendency will likely grow as next autumn's midterm elections in the U.S. approach, something that could hasten China's growing dominance in the region.

Asian leaders have to beef up efforts to prevent Trump from confining himself to domestic issues, making the role of Abe, who is Trump's friend and architect of the Indo-Pacific policy, more important than ever.