Trump's nuclear comments may be a trap for Obama 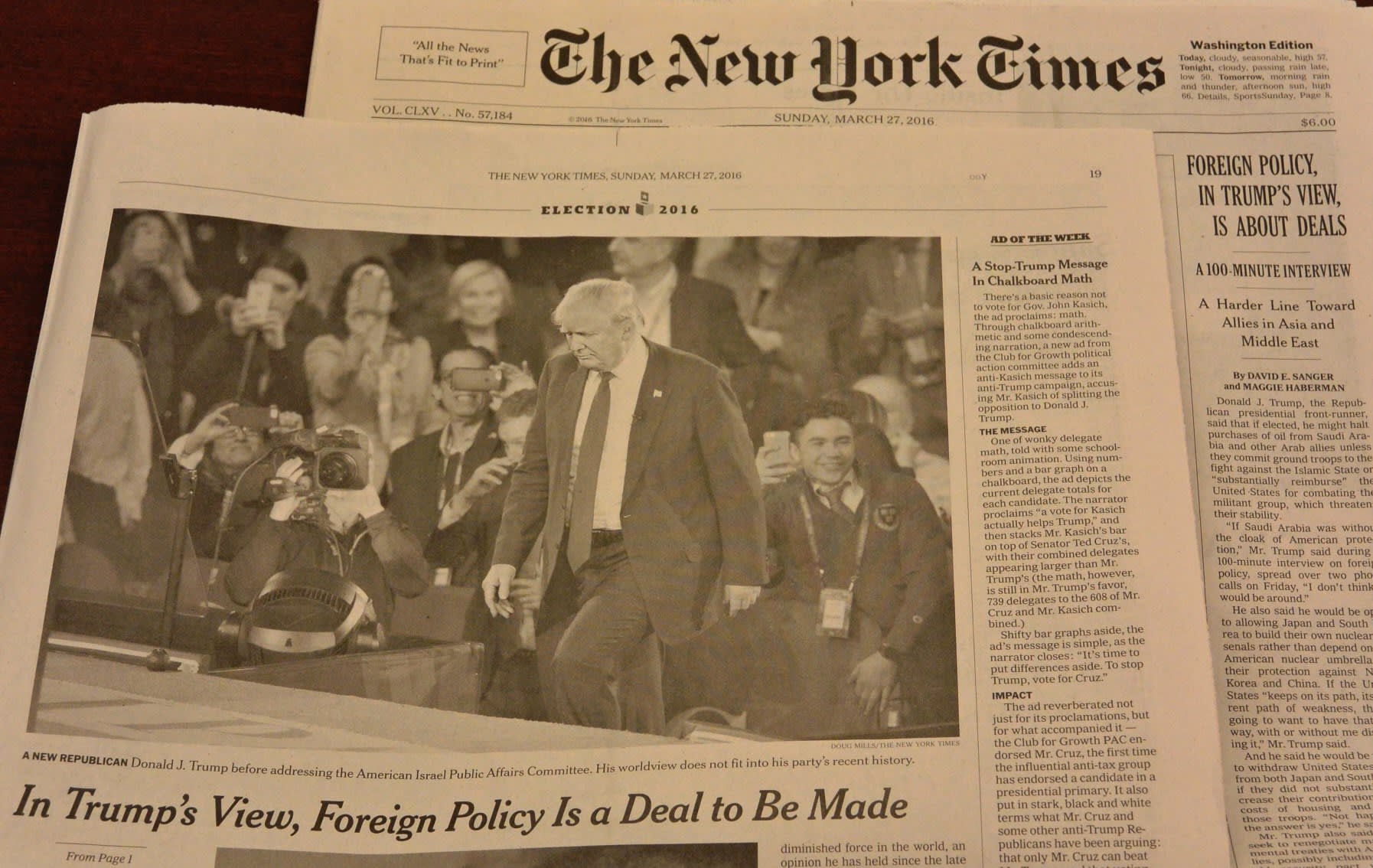 In an interview with The New York Times, Donald Trump unveiled his "America First" foreign policy.

WASHINGTON -- Donald Trump, the front-runner in the U.S. Republican presidential primaries, has suggested that the U.S. withdraw its forces from Japan, and that Japan and South Korea obtain nuclear capability.

These suggestions not only threaten security alliances -- Japan and South Korea are now under the American nuclear umbrella -- they also pose a challenge to global security and economic policies.

Trump's timing seems to have been carefully calibrated.

His remarks came right before the final Nuclear Security Summit, in Washington, D.C., in late March, and allowed the New York tycoon to steal a march on U.S. President Barack Obama, the host of the summit. Obama has long talked of his desire for "a world without nuclear weapons," but Trump's words loomed over the summit, attended by leaders of over 50 countries, and drew global attention.

In an interview with The New York Times, Trump unveiled what he dubbed his "America First" foreign policy. "If the U.S. keeps on its path, its current path of weakness," he said, "they're going to want to have [nuclear arsenals] anyway." Were Japan to acquire a nuclear weapon in the face of the North Korean threat, Trump said, he is "not sure that would be a bad thing for [the U.S.]."

With nuclear capability, Japan and South Korea would effectively be able to defend themselves. This would be a fundamental change in both countries' security policies, which have long relied on the nations' respective alliances with the U.S.

Each country would increase its defense spending. This would put their public finances and domestic economies in jeopardy. The global economy would also be impacted. China and North Korea would have cause to continue developing nuclear weapons. The likeliness of an Asian arms race would spike.

One way Trump draws support is by criticizing American politicians, so consider his spoiling of Obama's summit a tactic. For Obama, who won the Nobel Peace Prize for his call for "a world without nuclear weapons," nuclear disarmament is a top priority. By suggesting the exact opposite when he did, Trump was able to savor a mouthful of schadenfreude.

"If we get attacked, Japan doesn't have to do anything," Trump said after he launched his campaign in June. In fact, he has repeatedly criticized the present Japan-U.S. security alliance, describing it as an "unfair" deal.

Trump loves to play the "unfair" card. "We are not reimbursed for our protection of many of the countries ... including Saudi Arabia," he told The Times. And "we pay a disproportionate share" of NATO costs.

The notion of this "unfairness" is particularly resonant with many Americans, so many of whom feel powerless in a society that is meant to be impartial.

Trump is said to have used this idea in business negotiations, and there are those who say it is what his success is built upon.

No wonder, then, that his campaign strategy banks on kindling a kind of victimhood in the Republican electorate.

In 1989, Japan's Mitsubishi Estate decided to buy Rockefeller Center, in New York, triggering a wave of Japan bashing. Trump, a New Yorker, got a firsthand look at these raw emotions.

Now he seems to be trying to inflame them, like when he says the weak yen is making Komatsu, a major Japanese construction machinery maker, unfairly competitive in the U.S.

Time to do something else

But this hearkening back to the 1980s, this painting of the U.S. as a victim of Japan, is outdated.

Still, Trump is telling inward-looking Americans exactly what they want to hear. The wars in Iraq and Afghanistan still cast long shadows over the country, and inequality is growing. This has many Americans simply wanting better lives for themselves -- and not striving for the ideal of a stable world.

So when Trump argues for Japan and South Korea to arm themselves rather than rely on the U.S. nuclear umbrella, his appeal grows. "America First!"

Rumors suggest that Trump's nuclear arms remarks were also intended as a setup. The theory is that if Obama decides to visit Hiroshima in May while in Japan for the Group of Seven summit, Trump would accuse him of engaging in "apologetic" diplomacy.

A poll shows that nearly 60% of Americans think the dropping of the bomb was justified. If Trump were to use this accusation, the theory goes, he would all but guarantee himself the votes of war veterans. He would also be dealing a blow to Hillary Clinton, the front-runner in the Democratic primaries and Obama's first secretary of state.

"[Trump] doesn't know much about foreign policy or nuclear policy or the Korean Peninsula or the world generally," Obama said on April 1 at a press conference after the nuclear summit.

Although support for Trump is waning, he remains a strong candidate. Perhaps it is time for other politicians to start doing something other than talking down to him, like Obama did.