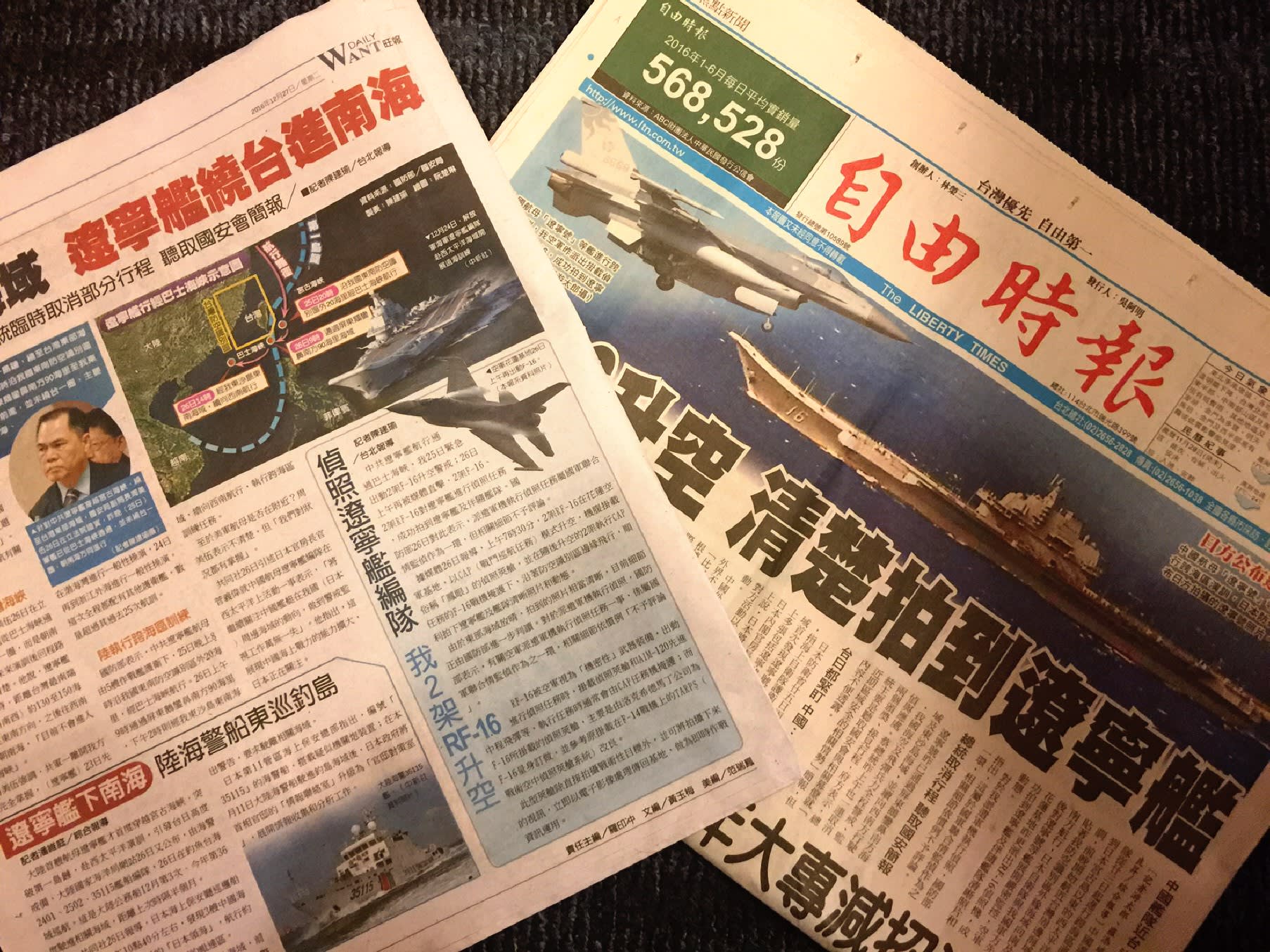 TOKYO -- Americans with close ties to Taiwan have a noticeable presence in U.S. President-elect Donald Trump's inner circle, and their influence is already being felt after Trump broke precedent by taking a congratulatory phone call from Taiwanese President Tsai Ing-wen and dropped a bombshell by referring to the "one China" policy as a bargaining chip.

Trump's nominee for transportation is Elaine Chao, a Taiwanese-American and honorary member of the foundation. Chao, who spent the first eight years of her life in Taipei, became the first Asian woman to hold a cabinet-level post in the U.S. when she served as secretary of labor under President George W. Bush.

Another significant person with connections to Taiwan is Edwin Feulner, who founded the Heritage Foundation in 1973. Feulner has visited Taiwan more than 20 times and has held talks with its leaders -- Lee Teng-hui, Chen Shui-bian, Ma Ying-jeou and Tsai. Feulner, who got acquainted with Tsai before she took her current post, maintains a pro-Taiwan stance and a stern attitude against China

Yates resided in Taiwan from 1987 to 1989 as a Christian missionary, conducting his work in places such as the southern city of Kaohsiung and Tsai's home county of Pingtung. He speaks fluent Chinese in the Taiwanese dialect and has his name in Chinese characters. In short, he is a pro-Taiwan person fully versed in its society.

He also played a key role in the U.S. Republican Party's first legislation related to Taiwan, such as the defense of and sale of weapons to the island, and the "Six Assurances" to Taiwan in the party's 2016 platform.

In a show of solidarity, Yates visited Taipei less than a week after the Trump-Tsai telephone conversation. While there, he spent three hours over a meal with Tsai at the presidential office building. The meeting was also attended by other Taiwanese leaders including Joseph Wu, secretary-general of the National Security Council who once served as Taiwan's ambassador to the U.S., Foreign Minister David Lee and Lo Chih-cheng, a lawmaker of the governing Democratic Progressive Party.

According to Lo, the group talked about current events in Pingtung while Yates earnestly advised Tsai to make close contact with grass-roots Americans when she visits the U.S.

The presence of Taiwanese leaders in charge of diplomacy and security at the meeting testifies that Taiwan sees Yates as an important person for establishing relations with the incoming Trump administration.

Some analysts have said that Feulner and Yates arranged the Trump-Tsai chat.

Whether that is true or not, Yates evidently gave detailed advice on the work to be done to prepare for Trump's administration during his three-hour meeting with Tsai, said a Taiwanese expert on international affairs. The day before the meeting, Yates told Taiwanese reporters that Trump will conduct diplomacy as a businessman, giving Taiwan advice on how to prepare for the next administration.

Chinese President Xi Jinping, meanwhile, is openly increasing pressure on Tsai, resorting to a dual strategy of prompting other countries to sever diplomatic ties with Taiwan and threatening the island militarily.

Xi met Ma in Singapore in November 2015 for a historic summit between China and Taiwan. At that time, China refrained from attempting to peel away countries that maintained diplomatic ties with Taiwan. It did so out of consideration for the Kuomintang's recognition of the "one China" policy despite differences in its interpretation between them.

Although Gambia severed diplomatic ties with Taiwan in 2013, for example, China established them with the West African country in March 2016 after Tsai was elected president. The move was aimed at pressuring Tsai to accept the "one China" policy.

But Tsai has refused to accept the policy, prompting China to step up its strategy against Taiwan. Chinese Foreign Minister Wang Yi met his counterpart from Sao Tome and Principe in Beijing on Monday and signed an agreement to resume diplomatic ties between the two countries.

Sao Tome and Principe is an African island nation as small as Hong Kong and has a population of 190,000. It officially became independent in 1975 and has since, like other small countries, switched back and forth between China and Taiwan depending on the amount of economic assistance given.

Furor against China is growing within the governing Democratic Progressive Party, and it is being directed at Tsai as well. Since her telephone chat with Trump, Tsai has avoided making provocative statements in a bid to ward off opportunities China can exploit. She apparently concluded that stable Taiwan-China relations can help boost her support rating, which has dropped due to stumbles in the management of domestic affairs.

Veteran DPP lawmakers in favor of Taiwan's independence are starting to take issue with Tsai's cautious stance, criticizing her as weak-kneed in the face of China's hard-line attitude.

The cut in diplomatic ties with Sao Tome and Principe is hardly a blow to Tsai. In a local TV station's opinion poll, a considerable number of people said Taiwan should end its money-based diplomacy even if nations decide to sever ties as a result.

However, storm clouds loom as Vatican City is negotiating with China to normalize relations. The city-state, the headquarters of the Roman Catholic Church, maintains diplomatic relations with Taiwan and stands against the Chinese Communist Party because it denies political authority of religious institutions. Catholics in China are divided into the government-controlled Chinese Catholic Patriotic Association and unauthorized churches following the pope.

If the Vatican and China reach a compromise over who can appoint bishops, Taiwan will find itself in a bind.

Xi is stepping up China's military pressure on Taiwan as well.

On Tuesday morning, the Taiwanese people woke up to news that a Chinese aircraft carrier, the Liaoning, and other warships entered the South China Sea the day before. Taiwan's air force scrambled F-16 and other fighters to monitor the fleet.

The Chinese fleet sailed between Japan's main island of Okinawa and Miyako Island and then entered the South China Sea via the Bashi Channel, a waterway in the southern part of waters between the Philippines and Taiwan. It also passed southeast of Pratas Island, which Taiwan controls.

Tsai will visit Nicaragua and three other Latin American countries in the second week of January. One big question looming is whether Tsai will make a stopover in New York and meet with Trump amid growing interest in how she will handle relations with the new administration under China's growing pressure.

Trump will take office on Jan. 20, and it is possible that he will meet Tsai before the start of his official duties as U.S. commander in chief.

The Taiwanese presidential office did not mention whether Tsai will stop in New York when it announced the itinerary for her Latin America trip.

If she does, the Heritage Foundation connections will play a role in building a bridge between the two leaders. Taiwanese media has reported that Tsai will meet Feulner while in the U.S. and that she is considering a meeting with Reince Priebus, Trump's nominee for White House chief of staff.

Priebus, a pro-Taiwan politician and chairman of the Republican National Committee, met Tsai in Taiwan in October 2015. He was accompanied by Yates during the trip.

For 40 years China has tried to imprint the "one China" policy on the international community. While past U.S. presidents struggled over how to deal with the issue, Trump seems to be jumping lightly over such a high hurdle.

If Trump does not recognize the policy, will a big wave wash away the common sense of security in Asia?