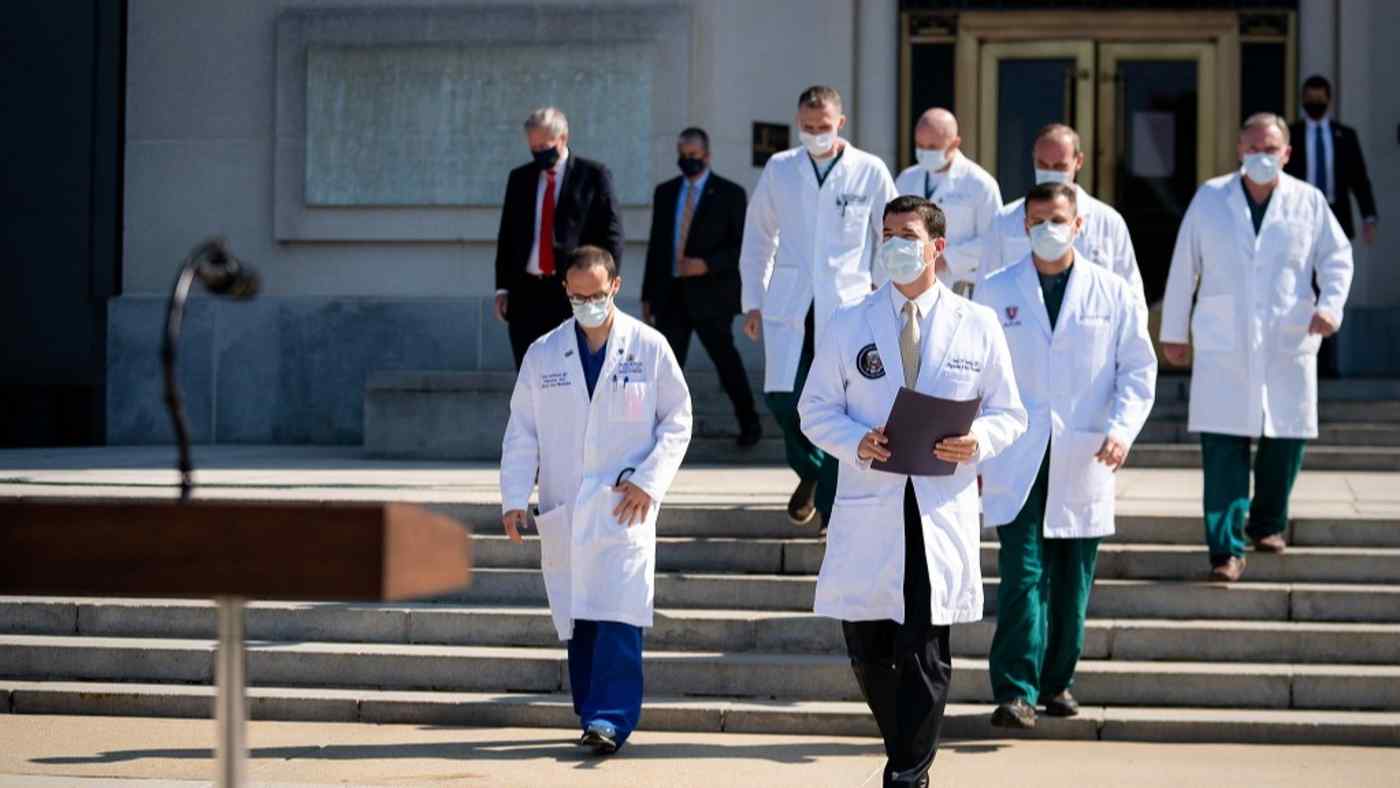 WASHINGTON (Reuters) -- President Donald Trump underwent a fourth day of treatment for COVID-19 at a military hospital outside Washington on Monday, with the severity of his illness unclear as his White House was hit by a wave of infections four weeks before the U.S. election.

Trump's announcement of his diagnosis landed like a bombshell on Friday, some 48 hours after his first presidential debate with Democratic challenger Joe Biden, highlighting the uncertainty that has marked a highly unusual campaign during a deadly pandemic.

Doctors at Walter Reed National Military Medical Center in Bethesda, Maryland, are treating Trump, 74, with a steroid, dexmethasone, that is normally used only in the most severe cases. Trump was running a high fever on Friday and had been given supplemental oxygen after his blood oxygen levels dropped, Dr. Sean P. Conley, the White House physician, said on Sunday.

But the Republican president's medical team, which has painted a rosy picture of his condition, will weigh whether he can leave the hospital later on Monday, White House Chief of Staff Mark Meadows told Fox News, adding that he was optimistic Trump would be discharged.

Even if discharged, Trump will need to continue treatment as he is still undergoing a five-day course of an intravenous antiviral drug, remdesivir. The normal quarantine period for anyone testing positive for the novel coronavirus is 14 days. In this image from video, President Donald Trump waves as he drives past supporters gathered outside Walter Reed National Military Medical Center in Bethesda, Md. on Oct. 4.   © AP

Trump frequently downplayed the threat of the pandemic which has now infected 7.4 million Americans and killed more than 209,000. In recent days, he released a series of videos to reassure the public he is recovering from the disease caused by the virus.

On Monday, his Twitter account released a stream of more than a dozen messages encouraging Americans to vote for him in the November election, including posts that read "LAW & ORDER. VOTE!" and "RELIGIOUS LIBERTY. VOTE!"

The coronavirus outbreak around Trump grew on Monday when White House press secretary Kayleigh McEnany said she had tested positive for the virus after "testing negative consistently" every day since Thursday.

McEnany, a well-known figure at the forefront of the White House's often combative dealings with the media, held a briefing for reporters on Thursday in which she did not wear a face mask.

ABC News reported on Monday that a coronavirus test for Chad Gilmartin, who also works in the White House's press department, had come back positive over the weekend. White House Press Secretary Kayleigh McEnany takes a question in the Briefing Room of the White House on Oct. 1.   © Reuters

A Reuters/Ipsos poll released on Sunday showed Trump trailing Biden nationally by 10 percentage points. About 65% of Americans said Trump would not have been infected had he taken the virus more seriously.

Trump has repeatedly flouted social-distancing guidelines meant to curb its spread. He also mocked former Vice President Biden, 77, at last Tuesday's debate for wearing a mask at events, even when he is far from other people.

Biden, who has tested negative for the disease several times since sharing the stage with Trump last week, said on Monday he was willing to participate in next week's scheduled presidential debate if health experts deemed it safe.

The Democratic White House hopeful is due to resume in-person campaigning on Monday in Florida, where polls show a tight race in a crucial election battleground.

A return to the White House might help Trump project a sense of normalcy in his bid to win re-election on Nov. 3. Before falling ill, he had tried to pivot the campaign toward the U.S. economic recovery and the upcoming confirmation hearings for his Supreme Court nominee Amy Coney Barrett.

But the growing number of COVID-19 cases in the White House as well as Congress - three Republican senators have tested positive for the virus in the last week - threatens to place Trump's response to the pandemic under a finer microscope.

Two of those senators now battling the virus were at a Sept. 26 White House event where Trump named Barrett as his nominee to replace the late Supreme Court Justice Ruth Bader Ginsburg, who died last month.

Trump is also under fire for a statement that he met with soldiers and first responders at the hospital in Bethesda - moves that potentially exposed even more people to the virus, as well as the drive-by on Sunday and a fundraising trip he made to New Jersey last week.

"Every single person in the vehicle during that completely unnecessary presidential 'drive-by' just now has to be quarantined for 14 days," James Phillips, an attending physician at the Walter Reed facility. "They might get sick. They may die. For political theater."

New Jersey Governor Phil Murphy, a Democrat, told CBS' "This Morning" show that the trip Trump made on Thursday to the president's golf club in Bedminster, New Jersey, an event attended by about 100 people, should never have happened.

But doctors not involved in Trump's treatment said optimism about the president's condition might be misplaced. As an overweight, elderly man, Trump is in a category of people who are more likely to develop severe complications or die from the disease.