TAIPEI --  The carefully choreographed inauguration ceremony of new Taiwanese President Tsai Ing-wen has served to send an unmistakable, if veiled, message on the thorny issue of cross-strait relations. 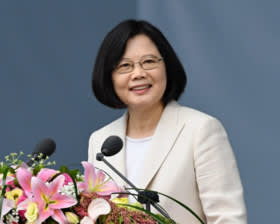 New Taiwanese President Tsai Ing-wen speaks during the presidential inauguration in Taipei on May 20.

Tsai was sworn in as Taiwan's first female leader on May 20. The scholar-turned-politician heads the pro-independence Democratic Progressive Party, which won a resounding victory in the January presidential election and succeeded Ma Ying-jeou of the Kuomintang, or the Nationalist Party.