BANGKOK -- The third wave of COVID-19 that has broken over Thailand has brought a deceptive quiet to the country's streets. Anti-government protesters cannot stage big demonstrations, but the mood remains defiant and unrest is likely to erupt again as soon as the pandemic subsides.

The pro-democracy demonstrations, which drew massive support from young people last year, touch on the most sensitive issue in Thai politics: reform of the monarchy. But they have sputtered because the latest COVID-19 flare-up has forced would-be protesters to practice social distancing.

"COVID is the key reason [the demonstrations have died down], as the death toll is rising sharply, and I think the protest leaders are thinking the same thing, so that we don't see any big protests now," said Suthipan Sombatsuree, a 19-year-old university student who took part in protests last year.

The street agitation began in earnest last July, when more than 10,000 people gathered at the Democracy Monument in Bangkok to demand that the constitution be amended, that Prime Minister Prayuth Chan-ocha resign and that the monarchy, which backers have treated as semidivine for several decades, be reformed.

The protests gained momentum, peaking on Oct. 26, when a university student, Passaravalee Thanakijvibulphol, nicknamed "Mind," led thousands of people to the German Embassy to deliver a letter demanding the German government investigate whether the king had conducted Thai state affairs on German soil in violation of German law.

That prompted a crackdown by Thai authorities against the demonstrators. Many protest leaders have been arrested and charged with lese majeste, which carries a maximum penalty of 15 years in jail. Imprisoned leaders include Parit Chiwarak, also known as "Penguin," and Panusaya "Rung" Sithijirawattanakul. Holding them in pretrial detention kept them off the streets and helped quell big demonstrations.

Still, other leaders staged sporadic protests around Bangkok to keep pressure on the government under the slogan, "Free-up our Friends." 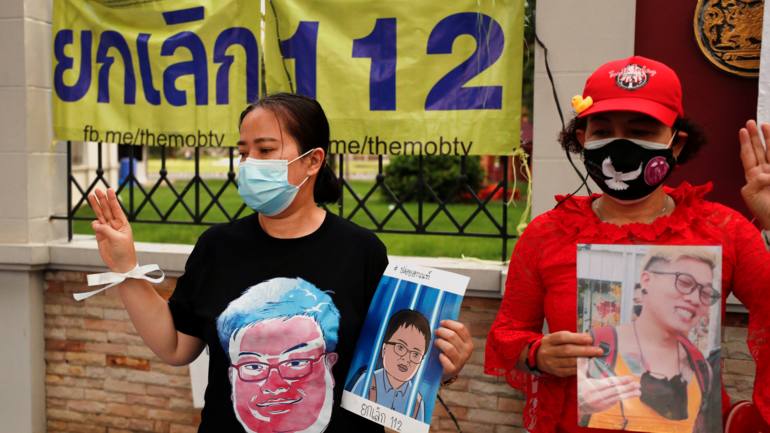 Supporters of arrested protest leaders King show the three-finger salute while waiting for their release on bail outside Klongprem Central Prison in Bangkok on May 11.   © Reuters

Parit and Panusaya were released on bail, on condition that they not criticize the monarchy again and remain in the country. They have not staged any big protests since their release.

"The key reason is the third wave, the severe outbreak of COVID-19," Boonyakiat Karavekphan, a political science lecturer at Ramkamhaeng University told Nikkei Asia. "I think the leaders also realized that they could not draw massive [numbers of] protesters if they staged a protest now because they are afraid of COVID-19."

The third wave of the coronavirus outbreak, which began in April, has raised the average number of newly confirmed cases to more than 2,000 a day, up from double digits earlier in the pandemic. As of June 14, Thailand has had 191,264 cases in all, with the death toll at 1,466.

However, Boonyakiat of Ramkamhaeng University said the disappearance of big protests does not mean the pro-democracy protesters have given up. "What we see now is that the anti-government fight remains, but they have just changed the fighting format," said Boonyakiat.

That is a common theme among Thai political analysts following comments posted by Penguin on Twitter and Facebook, which said: "For me, the fight to reform the monarchy will continue."

Yuthaporn Issarachai of Sukhothai Thammathirat University said protests have moved online in order to keep the momentum going. Government opponents are waiting for the right timing to take to the streets again with stronger demands.

"They keep posting on social media. ... There is much anti-government as well as monarchy-criticizing content on several social media platforms. These feelings, as well as anger against the government, remain, particularly at a time when the government is struggling to manage the vaccine rollout," Yuthaporn said.

Although the government had said 100 million doses of vaccines have been secured for Thais, and the vaccines rollout began March 1, only 1.6 million people have been fully vaccinated so far. That is only around 2.3% of Thailand's population of 69 million. And public and private hospitals have postponed inoculations amid a shortage of vaccines, derailing the inoculation effort. The government has not given a clear explanation to the public, raising concerns over whether Thailand will be able to overcome the pandemic and revive the weak economy by the end of this year as hoped.

Analysts say these missteps are likely to spark new protests as soon as the pandemic dies down.

"When the COVID situation is better, the pro-democracy groups will definitely protest again because it is a matter of ideology, which protesters see as the government having taken power through the establishment, not by fair rules," said Sukhum Nuansakul, a political analyst and a former rector of Ramkhamhaeng University.