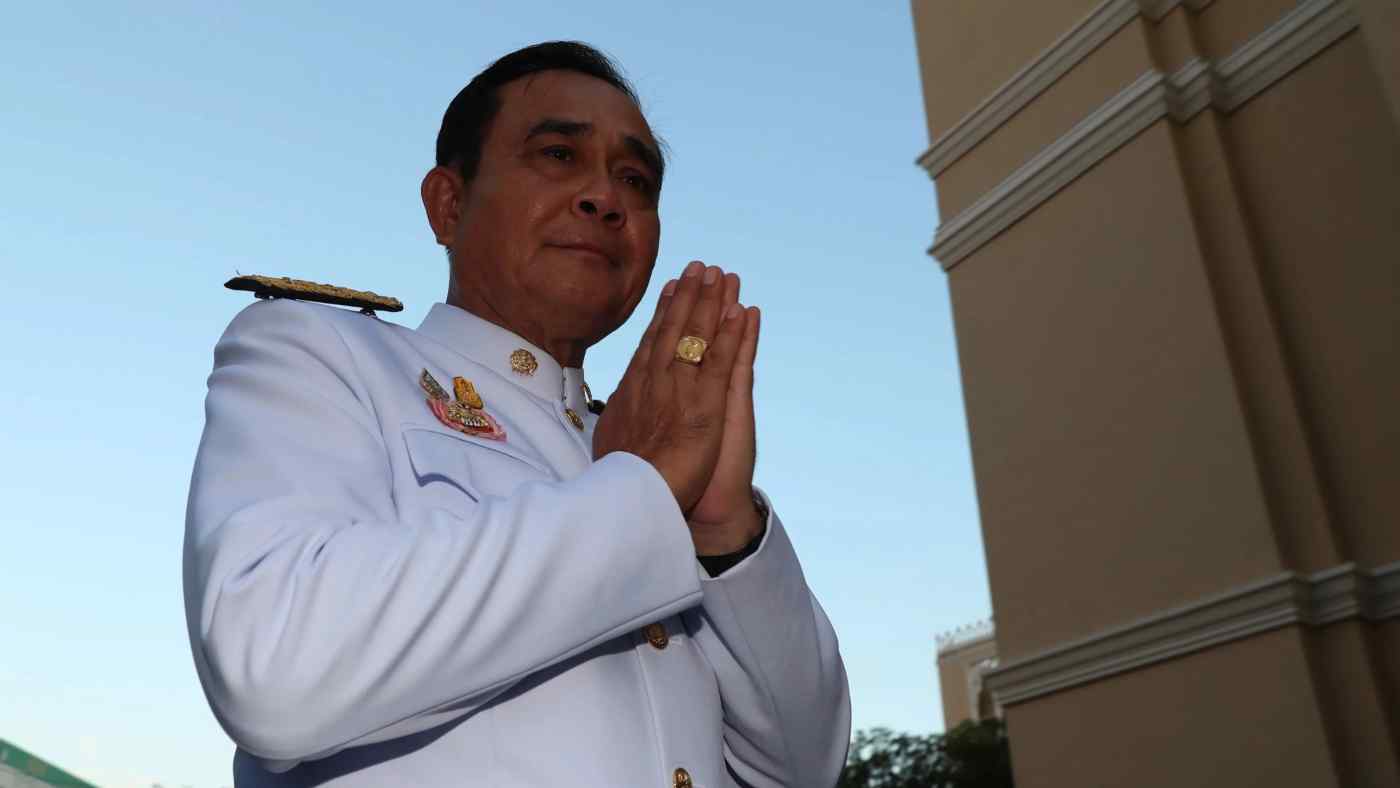 The departing junta, officially known as the National Council for Peace and Order, and its leader, Prime Minister Prayuth Chan-ocha, will disband when the new cabinet is sworn in. (Photo by Rie Ishii)
DOMINIC FAULDER, Associate Editor, Nikkei Asian ReviewJuly 16, 2019 17:55 JST | Thailand
CopyCopied

BANGKOK -- During an audience granted by King Maha Vajiralongkorn Bodindradebayavarangkun scheduled for early Tuesday evening, Thailand will once again go through the uniquely Thai ritual of disbanding a military junta and installing an elected cabinet. The new cabinet will meet immediately afterward.

"Thailand has moved from a military government to a civil-military authoritarian rule under disguised and manipulated electoral legitimacy," the Bangkok Post recently said in an editorial.

The departure of the junta, officially known as the National Council for Peace and Order, also voids Article 44, which has given Prime Minister Prayuth Chan-ocha virtually unlimited personal executive authority.

Two other former army chiefs will remain in the same posts they have occupied since Prayuth staged his coup in May 2014: Deputy Prime Minister Prawit Wongsuwan and Interior Minister Anupong Paojinda. Prayuth will, however, take over the sensitive post of defense minister from Prawit.

As he embarks on his second term, Prayuth rises higher in the ranks of Thailand's longest-serving prime ministers.

After some five years and two months, he has overtaken Field Marshal Sarit Thanarat (1959-64), probably the country's most iconic military strongman, for the sixth longest premiership in Thai history.

He also becomes only the fourth prime minister to serve consecutive terms. Among the other three, Field Marshal Thanom Kittikachorn baffled the outside world in 1971 by staging a "self coup" against his own government -- and staying on as prime minister.

That incident was revisited in recent weeks when Prayuth muttered about the possibility of another coup as members of his 19-party coalition bickered. The time it took for the cabinet to form was among the longest in history following a much postponed general election on March 24. 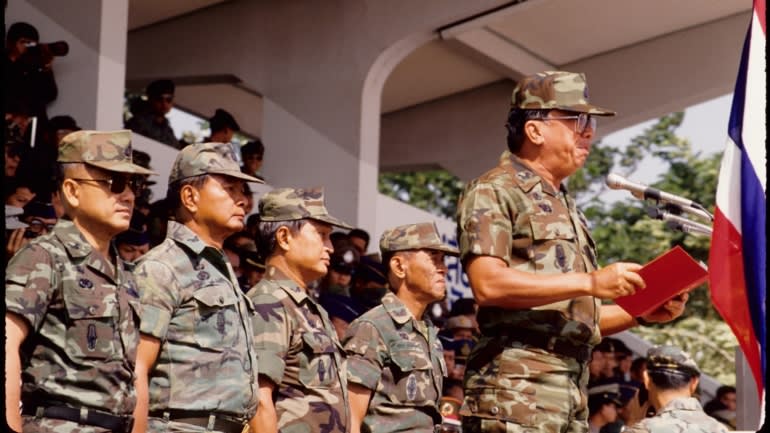 "Maybe, the time it took to put together a government is an indication of problems to come," Michael Nelson, a senior research fellow at Thammasat University's law faculty, told the Nikkei Asian Review. "In addition, the majority of the government parties in the [lower] house is very slim indeed."

The last time a junta moved aside was in January 2008 when the Council for National Security was dissolved. When army chief Gen. Sonthi Boonyaratglin staged his coup in 2006 against Thaksin Shinawatra, he chose his old boss for prime minister -- Privy Councillor Surayud Chulanont, another former army chief.

His offense was being remunerated for hosting a long-standing TV cookery show. Thailand descended further into color-coded politics as Government House was occupied for months by opponents of Thaksin's proxies dressed in yellow.

The previous retirement of a junta was in April 1992, when matters went south even more quickly. Supreme Commander Sunthorn Kongsompong, chairman of the National Peacekeeping Council, or NPKC, and father of current army chief Gen. Apirat Kongsompong, shut down the junta and went into retirement.

The 1992 and 2008 handovers went off the rails and ultimately led to bloodshed, the former leading to over 50 civilian deaths and the latter to over 90. Suchinda's collapse took less than seven weeks in a climate of public fury after he broke a frequently repeated promise not to become prime minister. The about-face led to immediate demonstrations and hunger strikes outside parliament.

Professional politicians were Suchinda's main undoing. His 50-portfolio cabinet was the largest in Thai history and included many of the corrupt figures that the previous year's coup was supposed to have removed from public office.

There were five deputy prime ministers, eight ministers attached to the prime minister's office and large numbers of deputy ministers, particularly in the lucrative ministries of agriculture, commerce, education, interior, and transport and communications.

The number of cabinet seats has been restricted under recent constitutions; Prayuth has 36 members filling 39 positions.

Questions have already been raised over the records of Finance Minister Uttama Savanayana and Deputy Agriculture Minister Thammanat Prompao, illustrating how much harder it is to form a coalition cabinet after an election compared to appointing one after a coup. Protesters under arrest at the Royal Hotel in May 1992. Thais remember the events of that month as Black May. (Photo by Dominic Faulder)

Like Prayuth in 2014, Suchinda came into office in 1992 with no previous cabinet experience and having never worked with elected politicians. Prayuth's experience remains limited since his first cabinet was entirely appointed.

The military's long grip on politics is clear. Since 1932, when absolute monarchy was overturned and constitutional democracy was first contemplated, there have been 29 prime ministers -- ignoring at least nine who served very briefly in an acting capacity. Of the 29, 12 were either serving or retired military officers -- but that figure includes Chatichai Choonhavan (1988-91) and Chavalit Yongchaiyudh (1996-97), retired generals who both entered office through the ballot box as party leaders.

While civilians outnumber military premiers, field marshals and generals have occupied Government House for well over 53 of the 87 years since 1932. Since then, the kingdom has had 13 successful coups, nine failed ones and a world record 20 constitutions.

Suchinda's premiership was the second shortest full premiership in Thai history: 48 days. After his coup in 1991 against the elected Chatichai Choonhavan, the military oversaw the writing of a new constitution that among other things restructured the senate.

A pro-military party, Samakkitham, was also created as a military vehicle, much like today's Palang Pracharat, which now leads the new governing coalition.

History has, however, not exactly repeated itself. Anand Panyarachun, the technocrat prime minister selected by Suchinda in 1991, proved extremely effective during his 14-month term in office. The administration pushed through vital legislation and social reforms during a period of much more robust economic growth. For the first time, Thais saw how much could be achieved with competent and assertive civilians in the cabinet.

The popular mood today is much more subdued than in 1992, perhaps worn down by a general fatigue with the familiar cycle of military-dominated politics. Thailand's press is also more professionally and financially enfeebled.

"Prayuth does not face the same strong civil society movement that had rejected Suchinda's constitutional manipulations in 1991, and that would later lead to the May events," Nelson said, referring to Black May in 1992 when thousands of protesters in Bangkok were violently suppressed by the military over a three-day period.