Red Bull boycott: From Thai pride to symbol of inequality BANGKOK -- Red Bull, the world's bestselling energy drink, derives its name and recipe from a Thai beverage called Krating Daeng. Created by Chaleo Yoovidhya, who was born to a poor family in the country's north, the power drink found its way onto the global stage when it was discovered by Austrian entrepreneur Dietrich Mateschitz.

Together, Yoovidhya and Mateschitz created Red Bull GmbH, which marketed the drink worldwide, after slightly reducing the sweetness for the global audience. The phenomenal success made both men multibillionaires. Chaleo's son Chalerm Yoovidhya sits at No. 2 on Forbes' Thai rich list.

But what was once the pride of the Thai people is quickly turning into a symbol of the country's inequalities and has featured prominently in anti-government protests that have Thailand on edge. Chaleo's grandson, Vorayuth Yoovidhaya, was allegedly involved deadly hit-and-run case but has never faced trial -- a case many perceive as an example of the special treatment afforded to the country's super wealthy.

"The world, please help us boycott Red Bull and all their related products. The son of the owner went with impunity in Thailand," a Twitter post read in July.

The hashtag "#BoycottRedBull" began spreading on social media after it was revealed that month that charges against grandson Vorayuth, who goes by the nickname "Boss," had been dropped.

The predawn incident happened in September 2012, when a Ferrari allegedly driven by Vorayuth hit a policeman on a motorcycle and drove off. The policeman, Wichean Klunprasert, who was dragged several meters by the Ferrari, died from his injuries. Alcohol and cocaine were later detected in Vorayuth's body.

Police investigators said at the time the Ferrari was driving at a speed of about 170 kph when the crash occurred. Vorayuth had forced a servant surrender to the police in his stead but the cover-up was soon exposed. Shortly after the crash, Vorauth's family paid Wichean's family about $100,000. 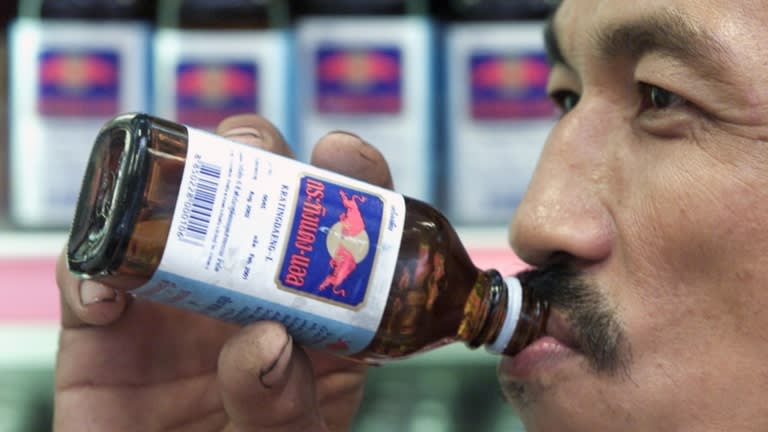 A man drinks a bottle of Krating Daeng, an original Thai version of popular drink Red Bull, in a Bangkok store.   © Reuters

Vorayuth was detained, but upon receiving bail, he refused to attend subsequent court hearings. He fled Thailand on a private jet. Each time his extravagant lifestyle in the U.K. was reported, citizens back home expressed anger. His frequent appearances at Formula One race events to cheer on the Red Bull team added fuel to the fire.

The stalled court case suddenly regained momentum when a new witness came forward in 2016, testifying that the Ferrari had actually been going about 70 kph and that the policeman's motorbike had suddenly changed lanes prior to the crash.

The prosecution team announced on July 24 that charges would be dropped against Vorayuth. Public anger exploded. According to a poll by Thai research company Super Poll, 91% of respondents said they could not trust the Thai judiciary system, and 82% said the incident was an international embarrassment.

Frustration mounted further when it was revealed that T.C. Pharmaceutical Industries, the company that owns Red Bull in Thailand, was making huge donations to the Thai government.

T.C. Pharma issued a statement on July 25, saying Vorayuth was not involved in the company's management.

In another suspicious turn of events, the new witness that had offered the key testimony was killed in a motorcycle crash, according to police. Under immense public pressure, Thailand's Prime Minister Prayuth Chan-ocha said in an August speech that he did not want the public to lose faith in the judiciary or the nation. He reversed the prosecution's decision to close the case and promised a fresh investigation.

On Aug. 25, it was reported that a new arrest warrant for Vorayuth had been approved.

Simmering beneath the anger is the Thailand's massive inequality. According to a 2019 estimate by Credit Suisse, the country's top 1% held about 50% of the nation's wealth. It ranked second only to Russia among 40 countries surveyed.