Thailand seeks to extend COVID emergency despite no new cases Thai Democrats open to coalition that moves 'in right direction' 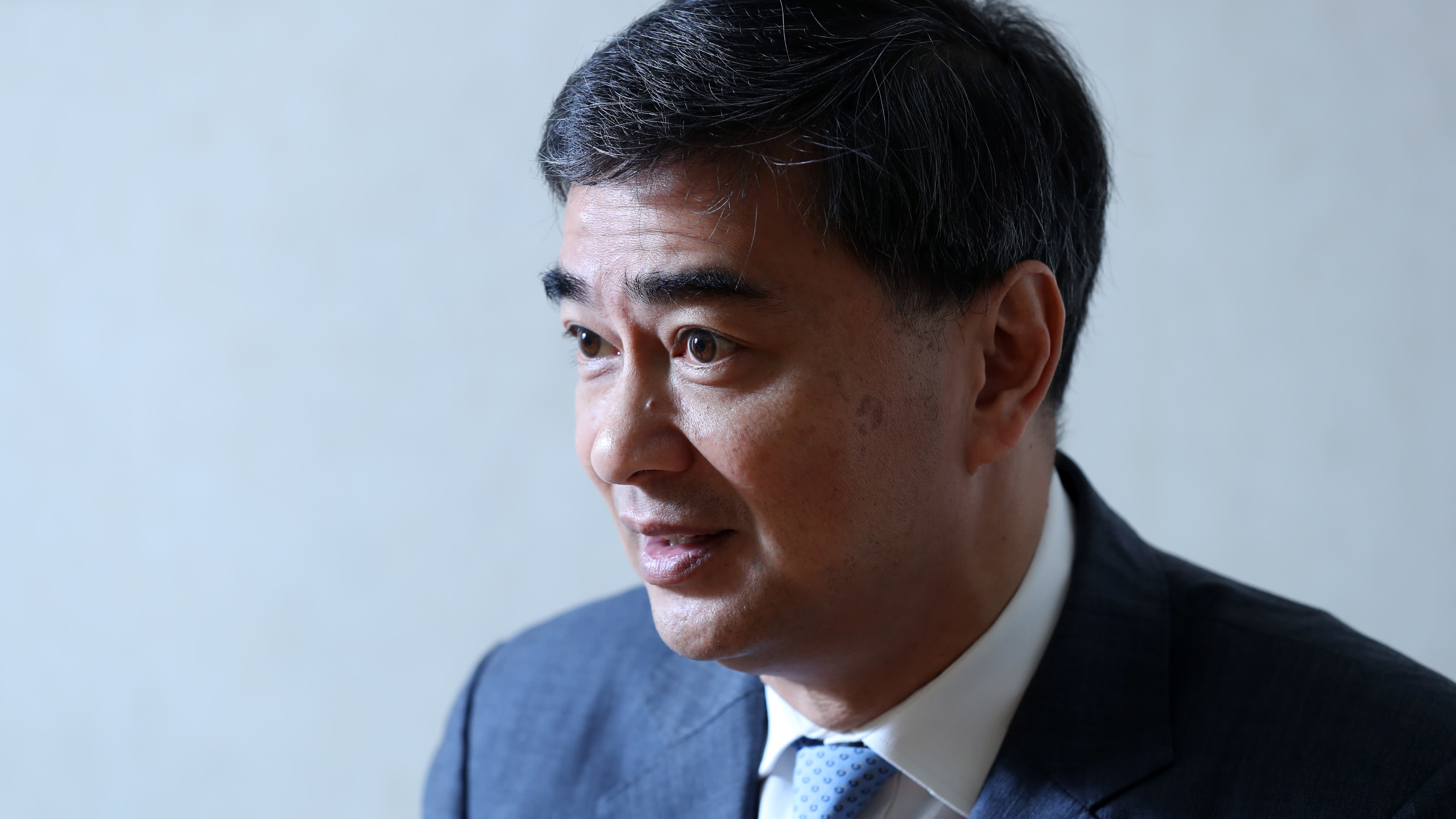 BANGKOK -- With much-awaited general elections looming early next year, the leader of Thailand's Democrat Party said his party will consider forming a coalition only if it is with a party that has a vision to take the country forward.

Speaking to the Nikkei Asian Review, former Prime Minister Abhisit Vejjajiva also stressed that members of the Association of Southeast Asian Nations must negotiate as a bloc with China and multinational technology powerhouses to receive better deals.

Thailand is scheduled to hold a general election on Feb. 24 next year, after nearly five years of rule by a junta led by Prime Minister Prayuth Chan-ocha.

"If we win a significant number of seats [and are] able to try to form a majority in the lower house, we would approach parties we feel we can work with," said the 54-year-old. "If we don't do so well in the election, we have to consider whether we would join any kind of coalition."

"The criteria for me is that we will only join a government that we feel will take the country in the right direction," he said. "We won't join a government for the sake of being in power," the former prime minister emphasized.

The election is expected to be a three-horse race, with the Democrats among the contenders. The others are the pro-junta Palang Pracharat Party, and the Pheu Thai Party and its allies, which are supporters of former prime ministers Thaksin and Yingluck Shinawatra. Given the Democrat Party's potential role as kingmaker, Abhisit's policy proposals are significant.

Thailand will assume the rotating ASEAN chairmanship on Jan. 1. Abhisit, who has a master's degree from the University of Oxford, insisted that both Thailand as the regional bloc need a better foreign policy. He said the Democrat Party is so far the only one that talks about how Thailand and the region can benefit from the country's stint as ASEAN chair.

Although ASEAN has its own plans for enhancing connectivity within the region, these are being overshadowed by China's Belt and Road Initiative, Abhisit said. "Over the last five or six years, we hardly see ASEAN taking advantage. It's more China addressing us," he said. "I think ASEAN should be dealing with China and the Belt and Road Initiative as a bloc rather than as individual countries."

He also has a bone to pick with big overseas companies. "We should be asking friends and partners to collectively speak to some of the big tech multinationals ... that are doing a lot of business in the region without actually contributing back to these economies," he said, without naming specific companies.

The party leader pointed to the problem of taxation. "Most of the advertisement [revenue] goes to these companies, and they are not paying taxes," he said. "As an individual country, we can only do so much. As a bloc of 10 countries with our partners, we can perhaps come up with an arrangement whereby these companies [have] to make contributions to the region," he said.

Abhisit served as Thailand's prime minister from 2008 to 2011. During his time in office, the security forces clamped down on pro-Thaksin protesters. A summit of leaders from ASEAN and East Asian nations in Pattaya in April 2009 was called off as hundreds of demonstrators pushed their way past security into the venue.

"Obviously, we would not want a repeat of what happened," he said. "Despite the difficulties, I managed to get ASEAN a seat on the G-20," he pointed out.

If Abhisit is to see his foreign policy ideas put into practice, he must at least be part of a ruling coalition. But forming alliances with others may be difficult, given his past criticism of other leaders.

Abhisit sees the Pheu Thai as his main competitor. "Our main rival has proved time and time again that they practice a brand of democracy that is illiberal and allows the use of populist tactics to make a creeping authoritarianism set in," he said.

Aiming to gain votes from the poor, the Pheu Thai government led by Yingluck before a 2014 coup offered pork-barrel measures for rice farmers and first-time car buyers. "Many of the programs that they implemented [have] proven to be failures or unsustainable," he said.

Abihsit gave the junta partial credit for how it has ruled, but also emphasized its policy missteps. "The biggest achievement from the current government has been to restore stability to the political situation, obviously with availability of special powers," he said. "The infrastructure projects that this government has initiated, we mostly support. But there needs to be better implementation."

"Clearly the economy has underperformed. We are currently growing at a rate lower than most ... countries in the region," he added. "Many people in rural areas and the agricultural sector even had their incomes decrease for the last four years," he said.

Despite these criticisms, Abhisit did not rule out forming a coalition with either side. "It depends on [whether] there are changes," he said.

In the coming election, political parties must register up to three prime ministerial candidates. "Normally we propose the party leader," Abhisit said, acknowledging that he will be the Democrats' main candidate. He said the party had not discussed whether it would list more than one choice for prime minister.