Thai forum blocked on Facebook, only to return with massive new page NEW YORK -- Facebook said Tuesday that it will appeal Thailand's order to bar access to a popular page critical of the Southeast Asian country's monarchy, the day after complying.

Facebook was "compelled to restrict access to content which the Thai government has deemed to be illegal" but is gearing up to fight this, a spokesperson told the Nikkei Asian Review on Tuesday.

"Requests like this are severe, contravene international human rights law, and have a chilling effect on people's ability to express themselves," the spokesperson's statement said. "We work to protect and defend the rights of all internet users and are preparing to legally challenge this request."

On Monday, Facebook blocked Royalist Marketplace -- a private group with more than 1 million members -- in Thailand.

The restriction came at a time of student-heavy demonstrations -- including a recent rally of up to 20,000, the biggest since the 2014 coup -- demanding democratic reforms. Royalist Marketplace has nearly doubled its membership since mid-June.

Buddhipongse Punnakanta, minister of digital economy and society, had warned Facebook on Aug. 10 that it had 15 days to remove content violating the Computer Crime Act or face legal action. Criticism of the monarchy is strictly forbidden in Thailand.

Royalist Marketplace was launched in April by Kyoto University professor Pavin Chachavalpongpun to discuss the role of the Thai monarchy. 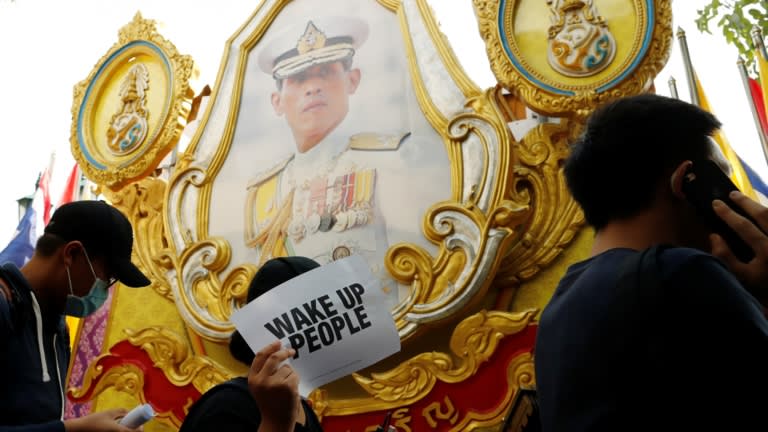 Pro-democracy protesters in Bangkok walk past a picture of Thai King Maha Vajiralongkorn at a rally to demand that the government resign, dissolve the parliament and hold new elections under a revised constitution.   © Reuters

A royalist group protested Tuesday at Japan's embassy in Bangkok, demanding that the country extradite Pavin.

On Monday -- the same day that access to his Facebook group was restricted -- Pavin set up a similarly named new group that has quickly amassed roughly 670,000 members.

In recent years, Facebook has frequently found itself in political jams in Southeast Asia.

Indonesia temporarily restricted access to certain features of Facebook, as well as its WhatsApp and Instagram platforms, after postelection rioting last year. Facebook has also complied with Singapore's fake-news law, which has been criticized by free-expression advocates as chilling political dissent.

The California-based company prides itself on being a champion of free speech -- especially in contrast to Chinese-owned competitor TikTok, the short-video platform that Facebook CEO Mark Zuckerberg says censors mentions of protests.