BANGKOK -- Thailand's King Vajiralongkorn Bodindradebayavarangkun issued a statement on Friday evening expressing opposition to his elder sister Princess Ubolratana's bid to run for prime minister in the upcoming general election on March 24, topping off a tumultous day for the country's politics.

"Bringing such a high-ranking royal family member into the political system, no matter in which way, is an act against the royal custom, tradition, and the culture of the nation," read the king's statement, which was broadcast on television. "It is considered an extremely inappropriate action," it added.

The 67-year-old Princess Ubolratana earlier on Friday was registered as the prime minister candidate of the pro-Thaksin Thai Raksa Chart Party. The party is allied with the Pheu Thai Party, which is linked to former Prime Ministers Thaksin and Yingluck Shinawatra, who are siblings. The move was seen as a game changer in the long-awaited election race, as it would put the current junta government and Prime Minister Prayuth Chan-ocha in the difficult position of running against a royal figure who is much respected among the Thai people.

But the move was also questioned by some politicians and legal specialists. The Election Commission's election guideline says that parties cannot involve the monarchy in political campaigns. Princess Ubolratana said later, in a statement posted on her Instagram, that she had "resigned from her royal status and have been living a life of a commoner."

However, the king objected to her defense. "Even though she has resigned her royal status in written documents, she still remains in the status and lives as a member of the royal family," said the king's statement. "Her daily life and work has been supported by the civil servants, who serve her and government agencies," it continued. 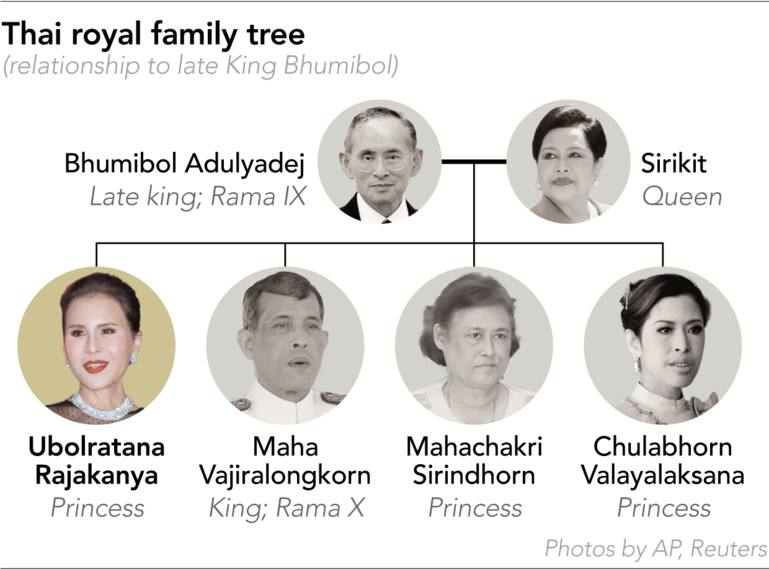 This now puts the Election Commission in a difficult position as it must assess candidacy qualifications and release the official list of premier candidates on Feb. 15. The words from the nation's highest-ranking figure could impact the election authority's decision. What was seen as a game changer has quickly become a source of uncertainty in this election race, and for Thailand's political situation going forward.

Thaksin and Yingluck both led elected governments that were deposed in military coups -- in 2006 and 2014 -- and subsequently convicted of corruption. They have lived in exile since fleeing the country, but remain popular in the rural north and northeast of Thailand.

"The Thai Raksa Chart Party is much honored to be blessed with the mercy of Princess Ubolratana upon her highness's acceptance as a prime minister on behalf of our party," a statement from the party said. "She would like to utilize her knowledge and expertise accumulated from her experience in Thailand and overseas."

The announcement was made before the Friday deadline to register candidates.

Incumbent Prime Minister Prayuth Chan-ocha on Friday accepted the invitation of the pro-junta Palang Pracharat Party to run as its candidate. Thai sources have said that the king, whose coronation is in May, wants his reign to begin on a harmonious note, with all political parties putting aside their differences.

Princess Ubolratana is the eldest child of the late King Bhumibol Adulyadej. She relinquished her royal titles and privileges when she married American doctor Peter Jensen in the early 1970s.

She took on a new name, Julie, and lived in the U.S. with her family until 2001 when she returned to Thailand after divorcing her husband. She established close ties with Thaksin who was prime minister at that time. He supported her public projects. They continued to meet regularly even after Thaksin fled Thailand.

The princess has not kept her ties with the Shinawatras a secret. During the 2018 soccer World Cup, a photograph of her watching a match in Moscow with Thaksin and Yingluck went viral.

The current constitution allows parties to field up to three prime ministerial candidates.