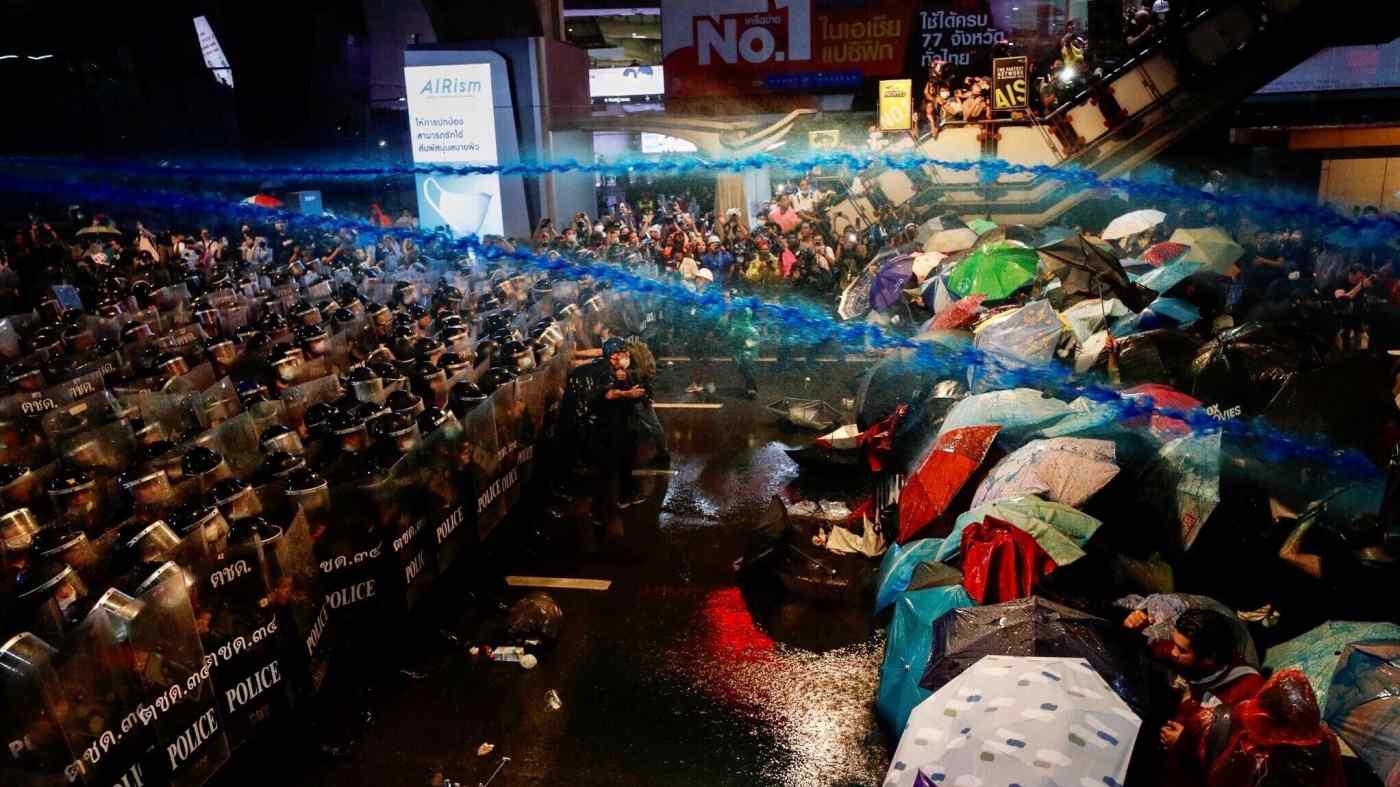 BANGKOK -- Hundreds of riot police in tight formation pushed back thousands of peaceful demonstrators using shields in the heart of the Thai capital on Friday night. Water cannons, tear gas and waterborne irritants have also been deployed.

At 8 p.m., protest leaders told protesters to go home and to regroup at a future time, but a small number stayed back to skirmish.

Soon after 9 p.m. it was reported that Pathumwan District Court had issued arrest warrants for 12 remaining student leaders, Panupong Jadnok (aka Mike Rayong) and Tattep Ruangprapaikitseree (aka Ford), the two most prominent still at large.

An eyewitness caught in one of the water blasts estimated the size of the crowd to be about 4,000.

At 7:45 p.m. police announced over a loud hailer that anyone standing in the way of advancing police would be arrested. 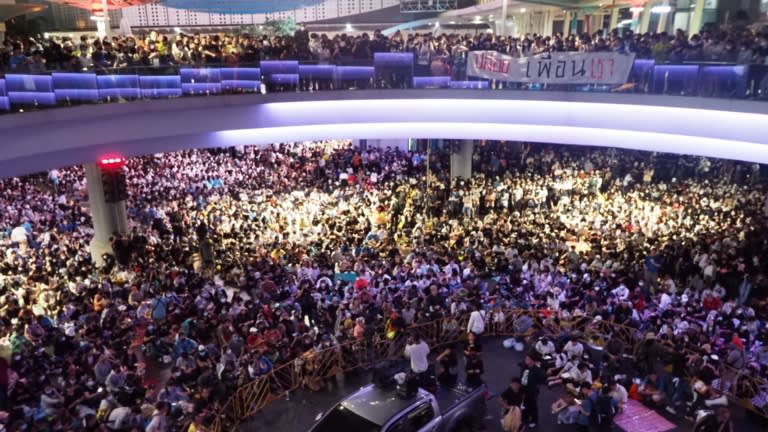 The standoff became serious at about 6:15 p.m. beneath the large BTS SkyTrain station at Siam Square, which is the crucial crossover point for the mass transit system's two lines.

Siam Square and at least five others nearby were closed temporarily, but trains continued to run through them carrying hundreds of mainly young people into the city.

Before the crowd began to disperse, some groups of protesters had already broken away heading to nearby Chulalongkorn University for sanctuary.

Prime Minister Prayuth Chan-ocha has shrugged off youth-led protest calls for his resignation while attempting to justify his administration's declaration on Thursday morning of a serious state of emergency.

Thailand has been governed under a less severe state of emergency since March to deal with the COVID-19 pandemic.

"I am not resigning," Prayuth told reporters after the latest declaration received retrospective cabinet endorsement validating it for 30 days.

"[Declaring a serious emergency] is a necessary procedure given the occurrence of unprecedented violent situations," he said without clarification.

Police immediately blocked traffic moving towards the Ratchaprasong intersection, where protesters had planned to reconverge after 2 p.m. for a second day. At 3 p.m. BTS SkyTrains started skipping Rajadamri and Chidlom stations -- the closest stops to the Ratchaprasong intersection. This was later extended to other stations further down the main line, but the trains continued to carry hundreds of protesters into the city.

Nearby CentralWorld, one of the largest malls in the capital, closed at 4 p.m. and sent staff home leaving the commercial area desolate for a normally busy Friday.

Protest organizers announced around 4 p.m. that the protest would be moved to the nearby Pathumwan intersection, another big crossing in the city's commercial hub outside the sealed area. Hundreds of protesters had already reached the new venue by 5 p.m.

A peaceful protest on Thursday night attracted at least 5,000 demonstrators to the Ratchaprasong intersection. The turnout sent a message that the protesters would not hesitate to take their chances and keep their activism moving.

The defiant tone, which has reverberated domestically and internationally, was stronger than on Wednesday, when over 10,000 protesters outside Government House ahead of an overnight vigil.

There had been doubts about whether today's rally would attract similar numbers to Wednesday and Thursday due to exceptionally heavy rain earlier in the day, but by early evening the downpours had subsided. Prayuth's declaration of a state of severe emergency has already led to the arrests of over 20 student activist leaders and a human rights lawyer.

Prayuth warned on Friday that a curfew could be imposed under the new "serious emergency" situation. When asked if he would consider martial law, he said it was a possibility if things get really out of hand. "We have not reached that point," he said. "There is no need for that right now."

The protests have generated global attention via Twitter and Facebook posts that include pictures and video clips of the crowd occupying the intersection.

"They will try many methods to challenge the declaration, in order to show the international community that this government is not capable of governing the country anymore," said Apichat Sathitniramai, an associate professor at Thammasat University.

"Criminalizing peaceful protests and calls for political reform is a hallmark of authoritarian rule," said Brad Adams, Asia director at Human Rights Watch. "Concerned governments and the United Nations should publicly condemn this wave of political repression and urge the immediate and unconditional release of democracy activists."

This puts the current administration in a difficult position. Although Prayuth argued that the crowd had turned "not peaceful" when it briefly interfered with a royal motorcade carrying Queen Suthida and Prince Dipangkorn Rasmijoti, the youth-led activists have been careful not to resort to violence as it would quickly erode public support.

This stays true for the authorities as well. Any brute force toward the youth would be costly in terms of public sentiment. Water cannon trucks were dispatched on Thursday but not used.

Some media outlets have been censored. Prayuth's decree bans the "publication of news, other media and electronic information that contains messages that could create fear or intentionally distort information, creating misunderstanding that will affect national security or peace and order."

Some cable TV channels have been partially censored, including Thai pro-democracy station VoiceTV and British public broadcaster BBC. Japanese public broadcaster NHK Premium was interrupted when it aired a segment on the Thai protests on a Wednesday night news show. The report and interruption came before the decree was issued.

Internet access to Change.org, which helps users create petitions, was also cut when the platform ran a signature-gathering campaign to urge Germany to declare King Maha Vajiralongkorn persona non grata. The king, who is currently in Thailand and scheduled to stay for weeks, has spent most of his reign in Germany.