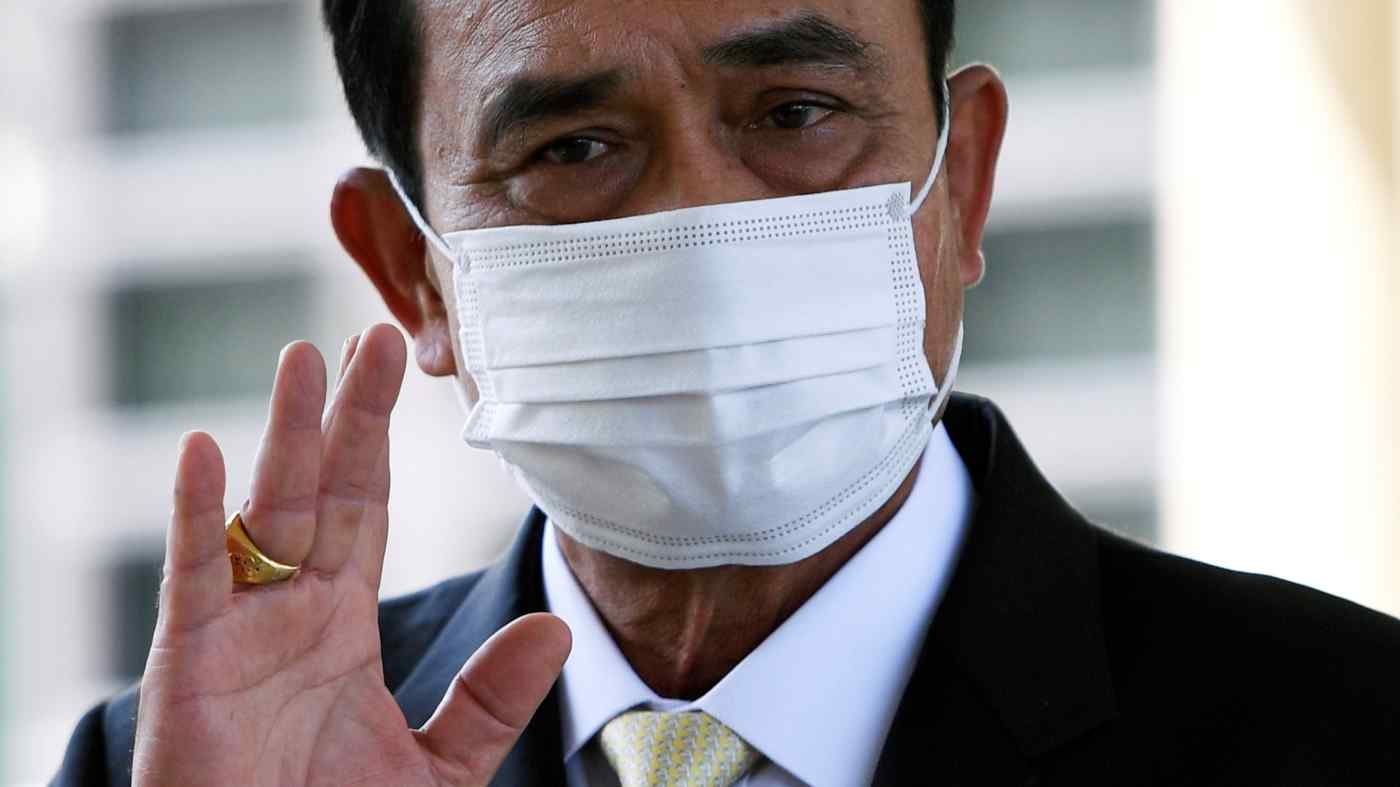 BANGKOK -- Thai Prime Minister Prayuth Chan-ocha can remain in office after the Constitutional Court ruled Wednesday that he is legally residing in an army house.

The widely expected verdict is, however, likely to add fuel to Thailand's pro-democracy movement, beginning with a rally later in the day.

Prayuth living in a military residence after retiring from the army in 2014 does not breach any prohibitions that apply to government ministers, the court judged.

Most observers including politicians, political watchers and even pro-democracy protesters were not surprised at the result as the court has consistently ruled in favor of Prayuth's administration.

The issue originally was brought up by the opposition during a no-confidence debate in February, when Pheu Thai party leader Sompong Amornvivat accused Prayuth of breaching the constitution by living in an army house. The case later was forwarded to the court by Chuan Leekpai, speaker of Thailand's House of Representatives.

The prime minister and his family live in a house on the base of the 1st Infantry Regiment, known as the King's Guard. The armed forces provide houses and apartments as welfare for service members, but they are not qualified to live in those residences once they retire.

Prayuth retired from the military in September 2014, nearly half a year after he led a coup as the army chief.

"I have always been following the law, and whatever the law said I will follow," Prayuth said in November.

But Prayuth defended his residency in February. "I've served the country all my life," he said. "Most importantly, I'm the prime minister, and security is necessary. It's important that there be an appropriate place for the leader of the country."

The army has sent mixed messages on the legitimacy of Prayuth's residency. A Royal Thai Army spokesperson said retired soldiers who continue to serve the kingdom in roles such as ministers are given exceptions and allowed to remain in that housing.

But in February, then-army chief Apirat Kongsompong cited the army's welfare program, which has let higher-ranking officers and retirees abuse army assets, as part of the irregularities and corruption that need a "cleanup."

Apirat's words came in response to a mass shooting in Nakhon Ratchasima on Feb. 8 by a soldier whose motive allegedly arose from being exploited in an investment scheme that relied on a housing loan within the army's welfare system.

The Constitutional Court's verdicts have benefited Prayuth's ruling coalition at the expense of political opponents during the past few years.

The court dissolved the pro-democracy and anti-military Future Forward Party in February, citing illegal funding from its leader, Thanathorn Juangroongruangkit. In late October, the court stripped lawmaker status from an opposition member for holding shares in media companies, while upholding the status of 28 other opposition lawmakers and 29 ruling party members facing similar charges.

The accusation involving Prayuth's residency is based on multiple sections of the Thai constitution. Section 184 says that members of the House of Representatives and Senate shall not receive any special money or benefit from a government agency, state agency or state enterprise. This applies to nonparliamentary ministers, according to Section 186.

Section 160 lists requirements to qualify as a minister, including that such individuals must not behave in ways that constitute a serious violation of or failure to comply with ethical standards. Section 170 says a minister's position will be terminated if failing to meet the requirements under Section 160.

Prayuth's resignation as prime minister is one of three demands made by Thailand's pro-democracy protesters. They also seek constitutional amendments and reform of the monarchy.

At a rally on Sunday, protest leader Parit "Penguin" Chiwarak called on people to demonstrate in front of the Constitutional Court on Wednesday, but protest organizers changed the venue on Tuesday to the Ha Yaek Lat Phrao intersection in northern Bangkok. The rally is expected to start after the verdict.

Sunday's rally originally was to be held outside the 1st Infantry Regiment to dramatize the residency issue, before authorities bolstered defenses. It was moved to the 11th Infantry Regiment, which is known as King's Close Bodyguard, to avoid any clash.

Human rights lawyer Arnon Nampa as well as protest leaders Panusaya "Ruang" Sithijirawattanakul and Panupong "Mike Rayong" Jadnok presented themselves along with Parit at a police station Monday for questioning, including on lese-majeste charges. Protesters want debate on making King Maha Vajiralongkorn accountable under the constitution. A dozen protest leaders including the above four face orders to meet with investigators on accusations of lese-majeste, or insulting the monarchy.

They all denied the charges, according to Arnon. "Even if what we say goes unheard and laws are used to shut our months, we will continue to fight," he said.