Rallies yet to overcome authorities but succeed in raising public awareness 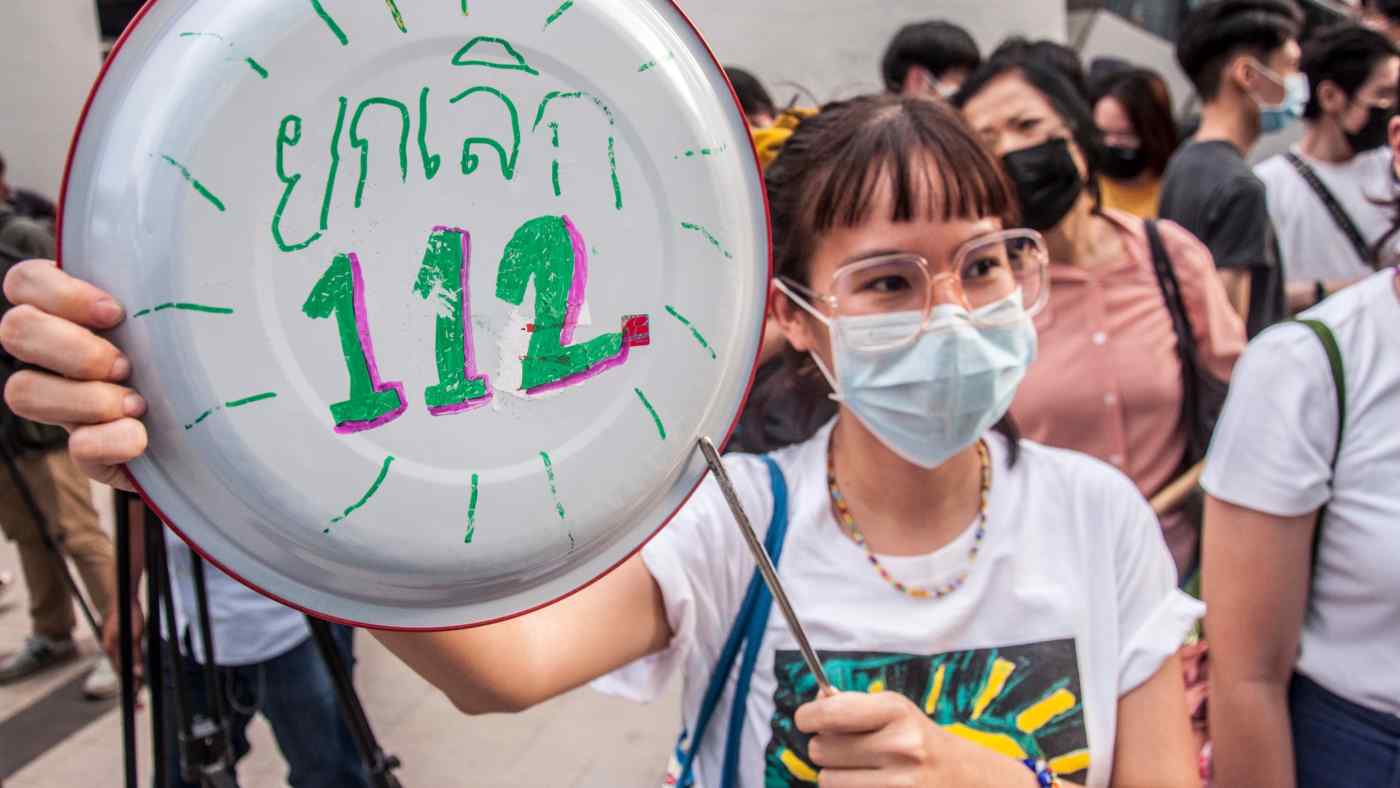 Demonstrators in Thailand have been inspired by their counterparts Myanmar to bang on kitchenware in public as a means of non-violent protest. The Thai protesters want the abolition of Article 112 of the criminal code -- the controversial law of lese-majeste. (Photo by Peerapon Boonyakiat / SOPA Images/Sipa USA)(Sipa via AP Images)   © AP
MASAYUKI YUDA, Nikkei staff writerFebruary 12, 2021 17:01 JST | Thailand
CopyCopied

BANGKOK -- Pro-democracy demonstrators in Thailand and Myanmar are pooling ideas as they peacefully protest against their respective governments, including statements of defiance like the three-finger salute inspired by The Hunger Games, a Hollywood film series.

"Abolish 112," Thai protesters yelled on Wednesday as they clanged metal pots and clattered everything from ladles to chopsticks, mimicking recent expressions of discontent in Myanmar.

Banging pots and pans in protest has been around since at least the 19th century, when Parisians used their kitchenware to protest economic conditions and food shortages.

The people of Myanmar have recently been using cooking utensils as a way to project civil disobedience. In Yangon, Myanmar's former capital and largest city, people have been striking up at about 8 p.m. each day since Senior General Min Aung Hlaing staged his coup in the early hours of Feb 1.

Myanmar has inspired pot-banging in Thailand. The three-finger salute Myanmar's protesters have taken up was first seen in Thailand in 2010 at Red Shirt rallies.

The Hunger Games film series dates from 2008, and portrays characters battling a totalitarian regime. Myanmar demonstrators have added a red ribbon to their version, the color of Aung San Suu Kyi's ousted ruling party, the National League for Democracy. The party won a landslide general election in November.

"I think it's a good idea to show them support from our side by adopting pot-clanging," Natcha, a female protester in Bangkok, told Nikkei Asia using her nickname. "People in Thailand and Myanmar are strongly against the abuse of power by both governments." The 26-year-old clerical worker arrived at the rally with an enamel pot and large stainless steel ladle to bash it. Demonstrators in Myanmar protesting the recent coup and demanding the release of civilian leader Aung San Suu Kyi have taken to flashing three-finger salutes as a symbol of resistance to authoritarianism.     © AP

It is not only the protesters who have been comparing notes. After staging his surprise coup, one of the first people Min Aung Hlaing reached out to was Prayuth.

It is unclear whether Min Aung Hlaing has sent out a letter to leaders of other neighboring countries. Thailand and Cambodia have been the least critical members of ASEAN in their comments about the coup.

On Wednesday, Prayuth acknowledged receiving a letter from Min Aung Hlaing asking for support bringing democracy to Myanmar. Prayuth said he already supported that process, "but it's their business what they do next."

Prayuth's path to power might be the most instructive to Min Aung Hlaing among all the ASEAN heads of government. As army chief, Prayuth seized power in 2014, and spent the next five years presiding over an appointed cabinet and unelected national legislative assembly.

After drafting a new constitution and tweaking the election laws, Prayuth was able to return as prime minister after a general election in 2019. The process was described as "anything other than partly free, and not fair" by the Asian Network for Free Elections (ANFREL), a poll watchdog.

Min Aung Hlaing justified his coup last week by claiming serious irregularities in the November election. ANFREL had meanwhile been congratulatory after the poll, and lauded the Union Election Commission for its successful work."Polling and counting operations were conducted diligently and transparently," ANFREL said in its interim report.

Banging pots noisily, over a thousand people rallied on Tuesday at a corner of the Pathumwan intersection in central Bangkok to oppose the return to use of the lese-majeste law after it was shelved in 2018 on the instuctions of King Maha Vajialongkorn, according to Prime Minister Prayuth Chan-ocha.

Lese-majeste is handled under Article 112 of Thailand's criminal code, and is meant to protect the monarch and senior royal figures from hurt and affront. Thailand's version is the most draconian in the world, with penalties of up to 15 years in jail per offense, and possible consecutive terms for separate offences.

Thailand had suspended application of the law until November, when Prayuth warned that the full force of the legal system would be used against mostly young prodemocracy demonstrators who had been unusually outspoken against the monarchy.

In January, a retired civil servant was sentenced to a record jail term of 43 years. Further evidence that use of 112 is ramping up, student activist Parit "Penguin" Chiwarak and human rights lawyer Arnon Nampa and two other leading activists have been in pretrial detention since Tuesday after being denied bail for alleged lese-majeste and other offenses.

Protesters in Thailand have made little headway since demonstrations kicked off in earnest in July 2020. Their three core demands are the resignation of Prayuth and his cabinet; constitutional amendments with public consultation; and reform of the monarchy under the constitution.

Their new counterparts in Myanmar are doing no better. They want the military to reverse the coup and return the country to elected civilian rule. So far, they have been met only with water cannons and riot police.

Both groups have, however, succeeded in raising public awareness of serious issues at home, and alerting the international community.

President Joe Biden said on Wednesday that he had approved a new executive order allowing the U.S. to "immediately sanction the military leaders who directed the coup, their business interests as well as close family members." The U.S. is planning strong export controls to Myanmar while continuing to support health care and other benefits for ordinary Burmese.

The United Nations Human Rights Council will hold a special session on the human rights implications of the crisis in Myanmar on Friday.

Freedom of speech and other human rights issues have generally come into sharper focus following the coup in Myanmar.

For Thailand, the use of lese-majeste has raised questions in the international community on how to handle diplomatic ties with the kingdom. The kingdom was strongly crtiticized on Monday by U.N. human rights officials.

According to the White House, U.S. national security advisor Jake Sullivan recently spoke by phone with Natthaphon Narkphanit, secretary-general of Thailand's National Security Council. Sullivan expressed his concerns over the recent arrests of Thai protesters and the lengthy lese-majeste sentences being handed down.