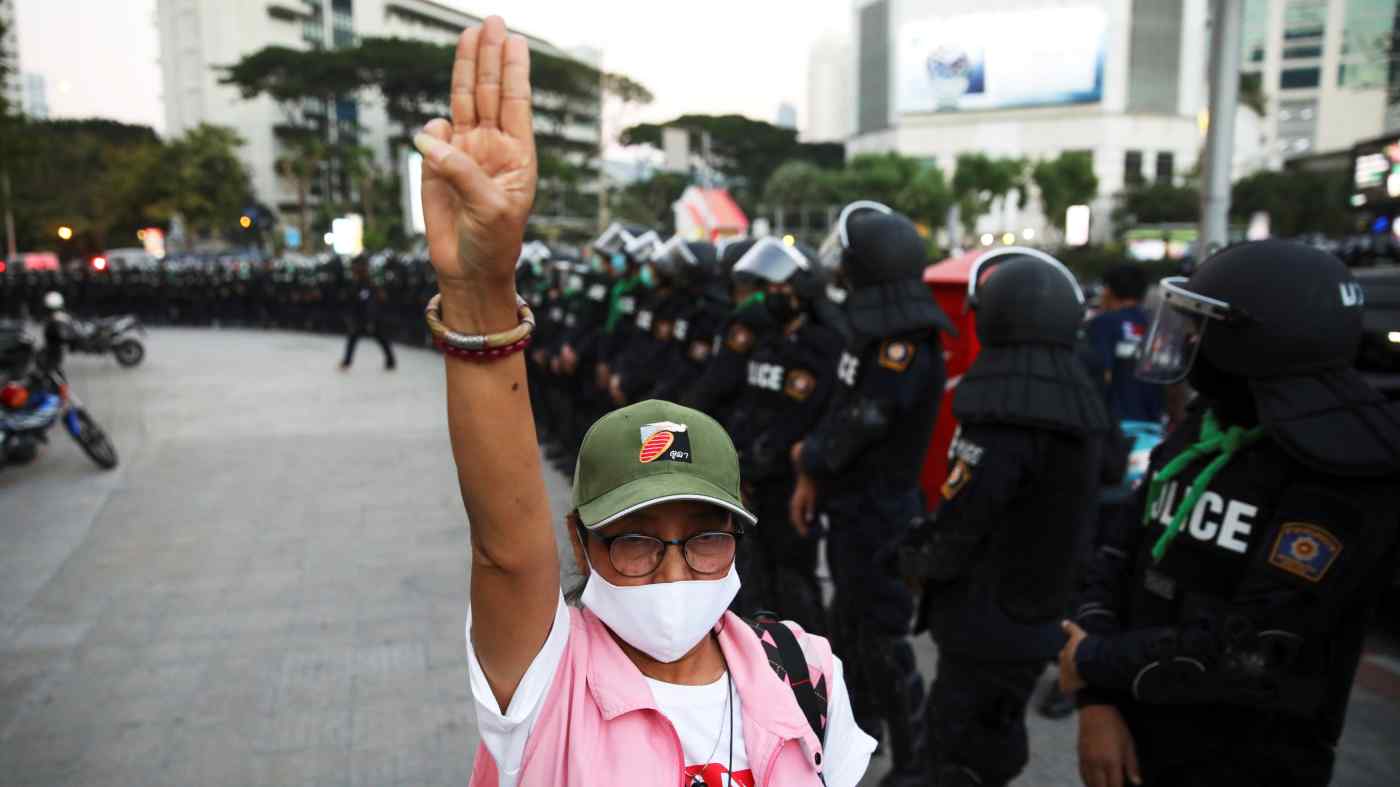 BANGKOK -- Thai police are becoming more aggressive in their use of a semi-lockdown meant to snuff out a COVID resurgence as a means to squelch a pro-democracy movement, as they are now arresting minors on lese-majeste charges.

Over the weekend, a small group of protesters broke a short period during which anti-government protesters refrained from staging rallies. A group called Free Guards attracted dozens of people to Victory Monument in central Bangkok. During the demonstration on Saturday, they unfurled a 112-meter blank banner that was meant to protest the kingdom's strict lese-majeste law.

The law makes it a crime to defame, insult or threaten the royal family.

Use of the draconian law, known locally as Article 112, has been reactivated after having been suspended in 2017 on King Maha Vajiralongkorn's instructions. Prime Minister Prayuth Chan-ocha on Nov. 19 ordered strict enforcement of all laws.

The Democracy Monument demonstration came after a freshman at Thammasat University was arrested on Wednesday for allegedly spray-painting text over an image of royals.

According to Thai Lawyers for Human Rights, the student's arrest warrant was the first approved by a court on lese-majesty charges since November. A few other activists have also been taken into custody on the same charge, with most being released on bail.

The arrests drove Free Guards to act. The group asked onlookers to write their own protest messages on the blank banner. Among the slogans written were, "Stop harassing people." And, "A failed government, a divisive society."

The government on Dec. 26 imposed a nationwide ban on political gatherings, citing the virus's resurgence. The country's youth-led protesters then announced a monthlong recess. They had been using street protests to demand the resignation of Prayuth and his fellow ministers, constitutional amendments and reforms to the monarchy.

Thailand as of Monday has reported 12,423 coronavirus infections. Of the total, 8,092 have been confirmed since Dec 20.

The country was the first after China to report a case, having done so last January. Its success in containing the first wave of the pandemic has ironically left Thais fearful of contracting COVID.

Since it began resurging in December, Prayuth's government has imposed either a lockdown or semi-lockdown in the country's major provinces.

In Bangkok, people are being urged to work from home. Bars, spas and massage parlors have been asked to close, while restaurants and shopping malls have been advised to close early. Many Thais have reluctantly accepted these measures, along with the ban on political rallies.

Large protest groups such as The People and Free Youth have sensed the sentiment and have refrained from organizing mass demonstrations.

On Saturday, a rogue call claiming to be from The People went out, asking protesters to rally at Sam Yan intersection in central Bangkok. The People deny being the source of the rally cry, but a crowd nevertheless converged on the intersection, and a bomb blast that injured two police officers and a journalist has since been confirmed.

The government has been striving to use the lull to turn the tide against the protesters. On Jan 11, it decided to allocate 300 million baht ($10 million) for the production of propaganda films. Of the amount, 30 million baht will go toward a film to promote patriotism.

The announcement came around the same time as new measures to reduce cost-of-living and other benefits for people who are especially vulnerable to the virus, showing the establishment's urgency to curb reformist sentiment.

"It's not possible to return to business as usual without securing Thai government commitments to respect democratic principles and rights for all."