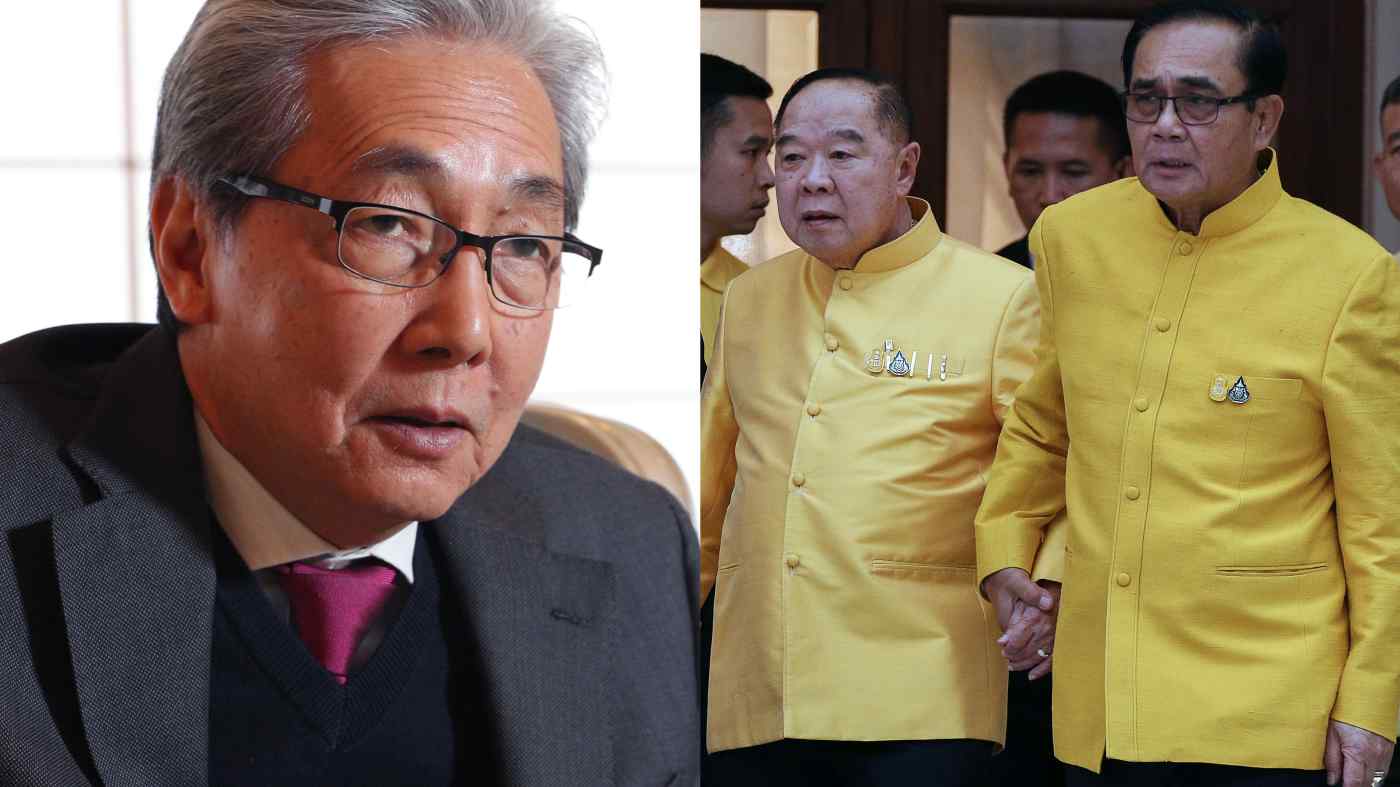 BANGKOK -- Thailand's coalition government has been rocked by an internal revolt in the pro-military Palang Pracharath Party, the largest in the 19-party alliance, with political daggers aimed at a technocratic-economic faction that was to lead the way out of the coronavirus crisis.

The shake-up was triggered this week after 18 members of the PPRP's executive committee abruptly resigned, forcing the party to have a leadership vote within 45 days.

One target in the power struggle is Deputy Prime Minister Somkid Jatusripitak, the economic czar chosen by Prime Minister Prayuth Chan-ocha, a former general. There is now speculation that Prayuth will reshuffle his cabinet, also casting doubt on the fate of Somkid allies Uttama Savanayana, the finance minister and hitherto PPRP leader, and Sontirat Sontijirawong, the energy minister and the party's secretary-general.

The political maneuvering is likely to complicate the country's plans for a smooth exit from pandemic crisis mode. But it also hints at deeper doubts about Thailand's economic direction even before the onset of COVID-19, and the shifting preferences of the nation's biggest business clans.

Somkid, who served as economic and finance policy architect to ousted Thai leader Thaksin Shinawatra, was brought back by the military junta that toppled the government of Thaksin's sister, former Prime Minister Yingluck Shinawatra, in 2014. Although he is not a member of the PPRP, he was part of a technocratic faction that gave a civilian face to the junta government led by Prayuth before the 2019 general election.

The mass resignation in the PPRP ended weeks of simmering broadsides -- and Thai-style political backstabbing -- against the Somkid-faction, said a source close to Somkid. "The anti-Somkid group has been forcing Uttama to resign for weeks, but because he didn't, they pushed for the collapse of Palang Pracharath's executive committee. This is to sideline Somkid and his economic team."

Some Thai industry leaders are rushing to rally behind Somkid, condemning the attempt to purge the economic team as the country struggles to reverse the economic blow dealt by the coronavirus.

"The economic team led by Dr. Somkid is still good, and other businessmen and I do not want change during the COVID-crisis," Suphan Monkolsuthee, chairman of Federation of Industry's board of directors, told the Nikkei Asian Review. "We want economic policies to continue and be transparent to help affected businesses."

Prayuth has tried to stay above the fray. "This is an internal matter and they should be talking within the party; I don't need to call anyone to talk," he told reporters this week. "I cannot force anyone to love each other."

The mass resignation was endorsed by five factions within the PPRP, drawn from a motley mix of seasoned parliamentarians, leaders of regional political clans and provincial godfathers. They are close to Deputy Prime Minister Prawit Wongsuwan, a Prayuth loyalist and the PPRP's chief strategist.

The shake-up came soon after the parliament voted on May 31 to approve an unprecedented 1.9 trillion baht ($60 billion) stimulus package to revive Southeast Asia's second-largest economy. The International Monetary Fund has forecast the Thai economy to contract by 6.7% this year, the worst in the region.

Thailand's largest cash lifeline has been targeted to help millions of farmers and temporary workers, contract workers and self-employed individuals whose incomes have dried up. Other priorities include assistance for small and midsize businesses, job creation and infrastructure development. Under the package, each of the 273 government parliamentarians will be allocated 80 million baht and the 207 opposition lawmakers will get 40 million baht each to be dispensed for relief efforts.

This week, the government eased more coronavirus-related restrictions, but extended an emergency decree, enforced in late March, until the end of the month. Thailand has recorded more than 3,000 confirmed cases of COVID-19 and at least 58 fatalities.

Political insiders say the expected change in PPRP leadership has raised questions about the party's political identity. After all, the Somkid-led technocratic faction was pivotal to the party's launch before the 2019 general election.

"The junta wanted the civilian garb, and not the military garb, to avoid being seen as the coup government, and as an extension of the junta," said a former parliamentarian. "Somkid and his allies started with technocrats to position the party as a civilian-technocratic one."

Somkid's alliance with the generals had been productive during military rule following the 2014 coup when Prayuth was commander in chief. As Prayuth's economic lieutenant, he played a major role in cultivating ties between the junta and Thailand's oligarchs. They included the richest billionaires, increasingly dubbed as the "five families," who dominate the economy.

The five are the Chearavanont clan, who own the agribusiness giant Charoen Pokphand Group; the Sirivadhanabhakdi clan, the beverage barons who own Thai Beverage; the Chirathivat clan, who own retail empire Central Group; and the Sino-Thai families who own the King Power Group, which enjoys a monopoly on duty free trade at airports, and owners of the Boonrawd Brewery, a dominant player in the beer market.

The families were among the who's who of wealthy Sino-Thai clans in Thailand's business world that the junta turned to for advice and investment for a flagship public-private program unveiled in 2016 to boost the provincial economy. Somkid got them on board by dangling generous tax breaks and favorable policies for big business.

Prayuth affirmed his dependence on the oligarchs after the economy worsened during the pandemic. In April, he wrote a personal letter to the country's top 20 billionaires asking them "to help all groups of Thai people" by implementing projects. They were also roped in to join "Team Thailand" to direct the country's fight against COVID-19.

The letter held clues about Prayuth's deepening ties with the oligarchs at a time when Somkid's star, according to analysts, appeared to be fading. "Somkid is a spent force and his departure is seen as overdue to many as the Thai economy lacks growth directions," said Thitinan Pongsudhirak, director of the Institute of Security and International Studies at Bangkok's Chulalongkorn University. "The Thai economy was lacking locomotion well before COVD-19."

He said the clutch of family-owned conglomerates is "more wedded" to Prayuth than Somkid. "If a new team is brought in and given more authority and space to get the economy moving again, the oligarchs will likely not miss him."

Bangkok-based diplomatic sources and business insiders are already picking up hints as to who the oligarchs are eyeing as technocrats to fill the void in Prayuth's economic team. A senior private banker's name had been circulating along with some high-profile names who had served at the central bank and those from business and industry chambers.

"The business elite will promote a new economic team of technocrats," said a business insider. "The conglomerates that have backed this government will want their nominee, the same way they backed Somkid."