Late vaccines and reeling economy weigh heavy on the kingdom 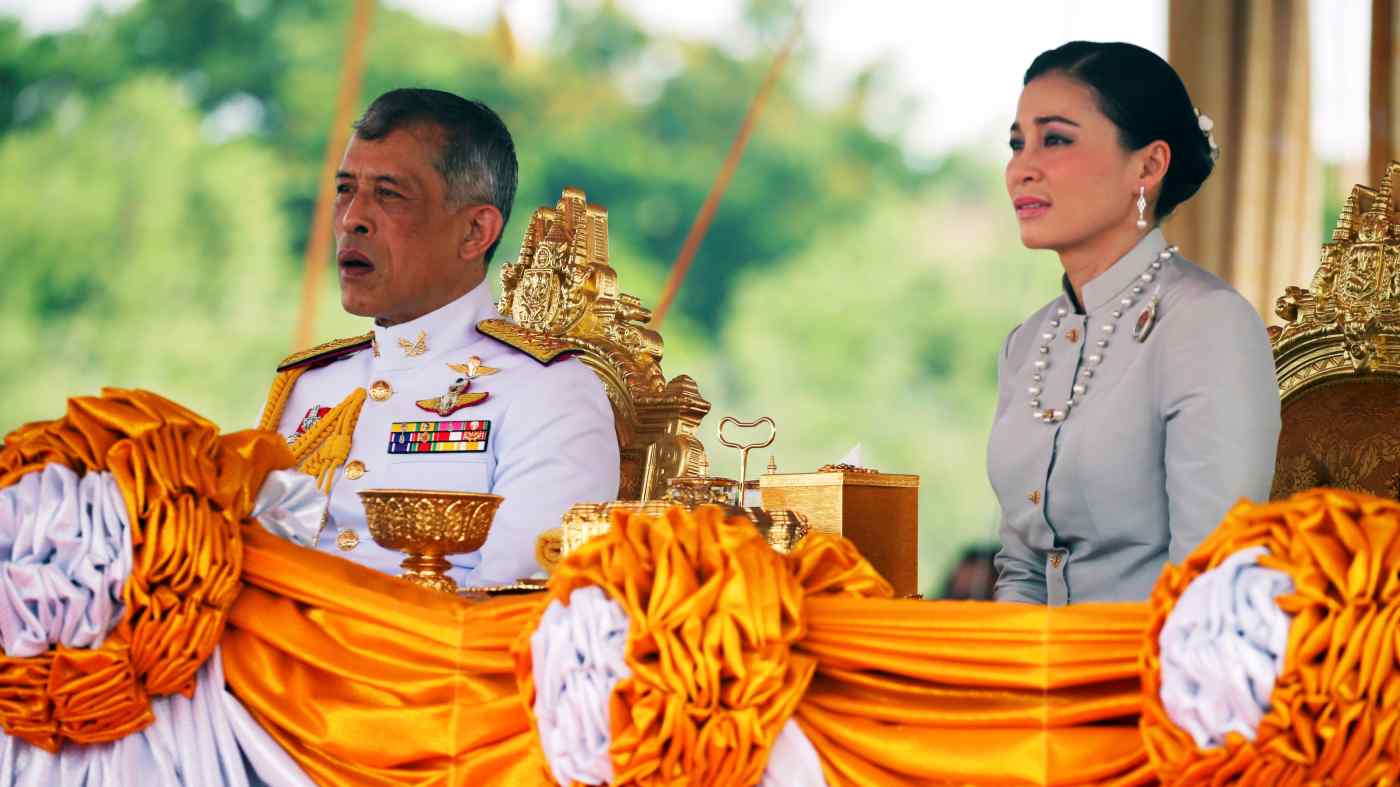 Thailand's King Maha Vajiralongkorn, accompanied by Queen Suthida, presided over the Royal Ploughing Ceremony in front of the Grand Palace in Bangkok the last time it was held on May 9, 2019.    © Reuters
Nikkei staff writersMay 4, 2021 18:00 JST | Thailand
CopyCopied

BANGKOK -- Thailand's King Maha Vajiralongkorn was unable to mark the second anniversary of his coronation on May 4 after a letter from the king's private secretary on April 27 instructed that the ceremony would again be canceled because of the COVID-19 pandemic, which has surged alarmingly in recent months.

After successfully keeping the pandemic at bay in 2020, as of May 4, Thailand has 72,118 confirmed cases and 303 deaths. Unconfirmed infections are expected to be higher.

The Bank of Thailand said in March that it expects the economy to grow 3.0% this year instead of the 3.2% it forecast in December. The Thai economy contracted 6.1% in 2020, the biggest fall in more than two decades, according to the government. The economy shrank 7.6% in 1998 amid the Asian financial crisis.

At the Grand Palace on Tuesday morning, the king would have paid homage to the nine preceding kings of the 239-year-old Chakri dynasty, which was founded in Bangkok in 1782.

In the letter, Air Chief Marshal Satitpong Sukvimol said the Royal Ploughing Ceremony on May 10 at Sanam Luang in front of the high castellated white walls of the Grand Palace would also be canceled, along with ceremonies on May 26 for Visakha Bucha Day, the anniversary of the Buddha's birth, enlightenment and death.

Thailand has 23 national holidays plus the Royal Ploughing Ceremony, which is a government holiday for civil servants and state enterprise workers when banks and companies generally carry on as normal. Nine of the holidays relate directly to the monarchy

There were only 18 full public holidays in 2014 when General Prayuth Chan-ocha staged the coup that enabled him to become prime minister. Two of the extra holidays -- Chinese new year and an extra day for Songkran, the lunar new year -- are essentially populist but also stimulate domestic travel.

The other three are new royal milestones: Queen Suthida's birthday on June 3; King Vajiralongkorn's birthday on July 28; and the anniversary of the passing of King Bhumibol Adulyadej on Oct. 13.

King Vajiralongkorn's coronation two years ago followed the death of his father, King Bhumibol, on Oct. 13, 2016, at the age of 88. King Bhumibol acceded on June 9, 1946, and after 70 years was the world's longest reigning monarch.

King Vajirolongkorn returned from Germany, where he had long resided, in October to mark the fourth anniversary of his father's passing, and has not left the country since -- by far his longest visit in many years.

Many of his visits from Germany coincided with royal or religious holidays when he performed public royal duties. One of the hallmarks of the new reign has been elaborate ceremonies and pageantry pumping the mystique of monarchy, notably at the king's signing of Thailand's 20th constitution and the grand funeral of King Bhumibol, both in 2017, and the coronation in 2019.

The king's return from Germany last year coincided with an upturn in youth-led pro-democracy protests calling for the resignation of Prayuth and his cabinet, redrafting of the constitution with public consultation, and reform of the monarchy under the constitution.

One of the king's responses was to make himself unusually accessible at gatherings of royalists. As with the recently canceled royal ceremonies, raising the royal profile has been stymied by the most serious COVID-19 surge Thailand has so far suffered.

The public mood is subdued, and last year's protests have run out of steam. Key young leaders now sit in pretrial detention charged with lese-majeste -- the archaic crime of insulting the king, queen, heir or regent.

The best known of the inmates are Parit "Penguin" Chiwarak and Panusaya "Rung" Sithijirawattanakul, both of whom were arrested in February. The pair have been on hunger strike since March to protest the criminal court's refusal to grant them bail ahead of their trials late this month.

With all its key leaders locked away, the supposedly 'leaderless' movement has run out of steam. Its open criticism of the monarchy and unprecedented calls for reform has, however, had a lingering effect. Only the most hardline royalists believe the critical genie can be forced back into its bottle.

Critical views of the establishment can still be found on Line, Twitter and Facebook: "Release our friends," said one, "Monarchy needs to be reformed," said another.

A recent post on Facebook encouraged dissenting Thais to "move to other countries" with more freedom and better social welfare. The page attracted 470,000 members in a matter of days, with people sharing information on relocation.

On Feb 12, protesters at Khon Kaen University, the largest campus in northeastern Thailand, ran a red banner up the main flagpole with the message "Monarchy reform" written on it. Two weeks later there was another protest at the university attended by over 1,000 students -- one of the largest gatherings this year.

On March 23, students at Chiang Mai University's faculty of fine art went further with an exhibition that included the Thai national flag with its thick blue central stripe missing. The blue represents monarchy between white stripes for nation and religion and outer red stripes for the bloodshed to preserve sovereignty and freedom. The exhibition was immediately shut down by the rector causing anger among the students but no further incident.

Bangkok continues to see sporadic flash protests and candle vigils outside courts and prisons calling for the release of student leaders.

The youth-led pro-democracy movement kicked off last year with a protest at Thammasat University organized by a group called Free Youth. It attracted thousands of protesters calling for the resignation of Prayuth Chan-ocha and his cabinet, the dissolution of parliament, and an end to police harassment.

Those demands escalated in early August when Anon Tampa, a lawyer and human rights activist, broke a longstanding taboo and called for reform of the monarchy. The semi-divine status accorded Thai monarchs for centuries was suddenly in question.

Prayuth responded in November that all laws available would be used against unlawful acts by protesters. This effectively reinstated the Law of Lese-Majeste -- Article 112 of the criminal code -- which had been quietly dropped from use in 2018. According to Prayuth, that was on the king's personal instructions.

Since its reinstatement, royalists have been touring police stations and laying charges against alleged offenders. Penguin the hunger striker faces 20 charges of lese-majeste, and if found guilty could conceivably receive a 300-year prison sentence.

"This year, we are no longer seeing big protests and the monarchy remains firm," said Boonyakiat Karavekphan, a political science lecturer at Ramkhamhaeng University in Bangkok.

"But the protesters have changed the way they protest with the key leaders under arrest and several other limitations that prevent them from staging major protests," he said, citing COVID-19 restrictions and the resumption of lese-majeste prosecutions.

"We can't deny that an anti-monarchy ideology has implanted itself in the young generation, and it seems they are trying to protest in other ways to express their defiance -- including music, books, the arts," another political observer who asked not to be named told Nikkei. "They can break all the old limitations by going online."

It is not only the young who find fault with the government. The COVID-19 surge this year has angered the medical profession and the business community -- key constituencies in the kingdom's conservative camp. They have been venting their frustrations with the government much more openly of late.

A group called Mor Mai Thon -- "Doctors won't tolerate this" -- has started an online campaign for the dismissal of the public health minister, Anutin Charnvirakul. Anutin leads the Bhumjaithai party, the second-largest member of the ruling coalition. The petition received over 200,000 signatures within a few days of being posted on Change.org.

After doing exceptionally well in 2020 keeping COVID-19 at bay, the current surge is producing over 2,000 confirmed cases per day. This has made inoculation and the vaccine rollout the hottest political topic on the agenda since it relates not just to the government's competence but the monarchy's involvement.

For reasons that have never been clearly explained, domestic vaccine production of AstraZeneca has been made a monopoly of Siam Bioscience, a company which but for two shares is wholly owned by King Vajiralongkorn. Vaccinations with Siam Bioscience AstraZeneca are not expected to begin until June at the earliest after testing in Europe and the U.S. and gaining Thailand Food and Drug Administration approval.

The vaccine became a burning issue in March when an opposition politician, Thanathorn Juangroongruangkit, questioned the exclusive Siam Bioscience arrangement. He was subsequently charged with lese-majeste.

Thailand has so far received very limited supplies of AstraZeneca and Sinovac, leaving it far behind most of its Southeast Asian neighbors. According to The Economist, only 0.5% of adults have received their second vaccine doses.

Getting an effective inoculation program off the ground has become a must-win mission. Not only is it essential to the nation's good health, but failure would do untold damage to the already faltering royal institution.

The public mood is not sympathetic. According to an online opinion poll conducted by Suan Dusit Rajabhat Univesity from April 16 to 22, 67% of 2,082 respondents believe the government cannot cope with the current resurgence situation or keep it under control.

The government's image was further dented by the justice and transport ministers both being hospitalized after testing positive for COVID-19.