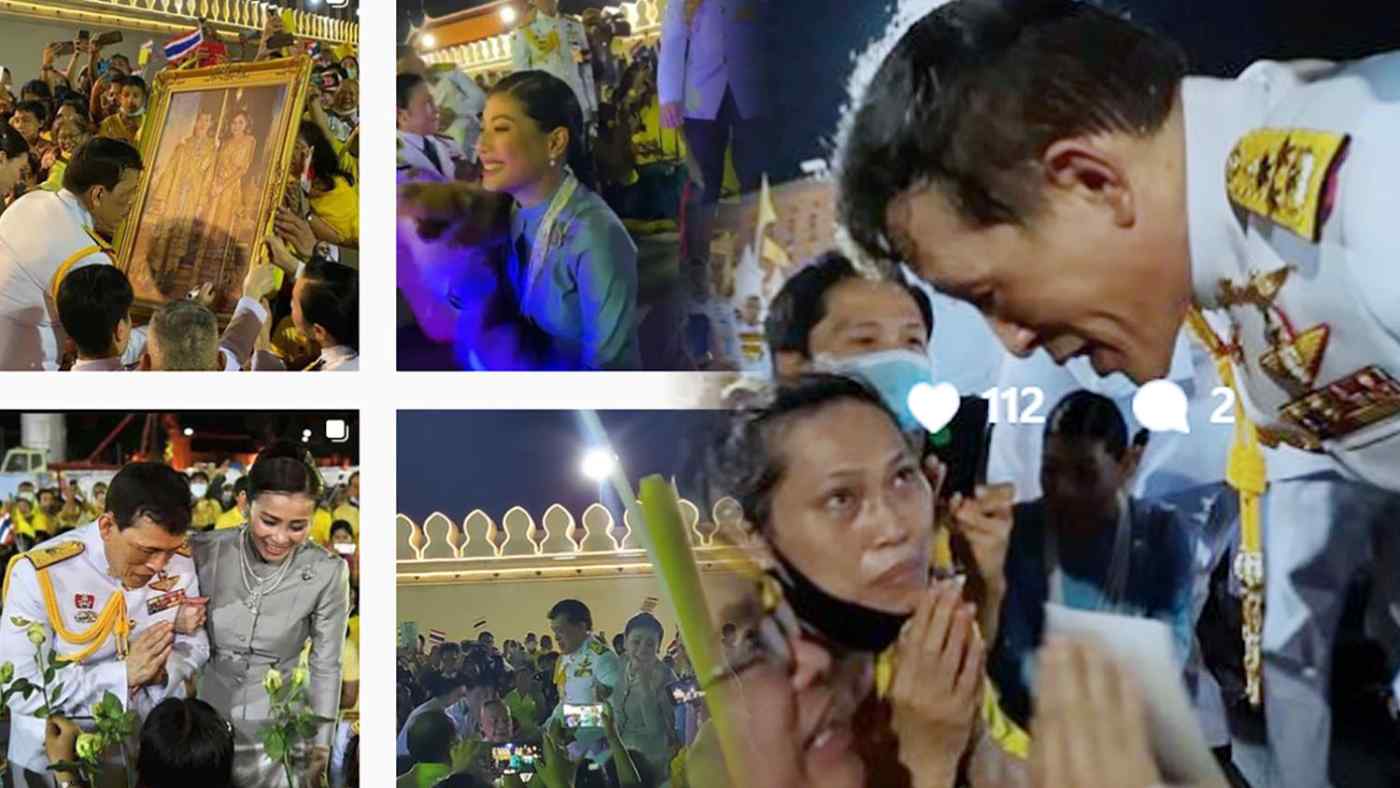 BANGKOK -- There has been an avalanche of new hashtags as both sides of Thailand's political chasm use social media to rally support, score points and publicize protest dates.

"Our #ThaiRoyalFamily is always sharing love with us and we are so happy to share these smiles to the world," tweeted Ploysi @khunploysi.

"We love them all the same," King Maha Vajiralongkorn said on Sunday evening as he mingled with an estimated 8,000 royalists outside the Grand Palace. He was answering Jonathan Miller, correspondent for Channel 4 News in the U.K. and U.S.-based CNN. "Your majesty, sir, these people love you, but what do you say to the protesters?" Miller had been in position over seven hours to obtain the first direct press contact with the king since his accession in 2016.

"I have no comment," the king initially responded during his unexpected 37-second encounter. "Is there any room for compromise, sir?" Miller asked. "Thailand is the land of compromise," the king said, before moving away uncomfortably as Queen Suthida shouted back: "We also love you."

Sunday's event was the latest public appearance of the king with Queen Suthida at his side. The two have been unusually visible in public during the king's longest stay in Thailand since his accession in 2016, despite major youth-led protests in recent weeks demanding profound reforms, including of the monarchy. On Saturday, the king also presided over a graduation ceremony at Thammasat University, the site of key protests. 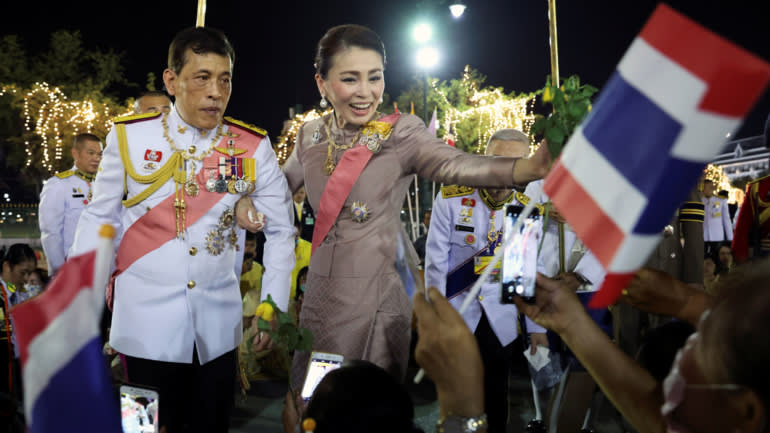 King Maha Vajiralongkorn has been visibly supported by Queen Suthida during unprecedented walkabouts among royalists in recent weeks.     © Reuters

The king is usually resident in Germany, but is now expected to stay in the kingdom until the end of December.

The royal couple mingled with supporters in Bangkok on Oct. 23, and on Oct. 27 during a visit to Ubon Ratchathani province. The encounters saw unprecedented familiarity. Royalists were allowed to take selfies and videos, many of which soon found their way to Twitter, Instagram and other social media platforms. King Maha Vajiralongkorn's second daughter, Princess Sirivannavari Nariratan, left, is one of the most active members of the royal family on social media, and frequently posts pictures of her father and Queen Suthida, right, on Instagram.   © Reuters

As crown prince, the king gave two significant interviews to the foreign media in the late 1970s and 1980s, and opened up later occasionally to the Thai media when his private life became the subject of much gossip.

The press and social media lit up after Sunday's unexpected incident, dissecting it in detail. Some ultraroyalists faulted Miller for not being on his knees when he posed his questions.

On Sunday, the king sent Princess Sirivannavari Nariratana Rajakanya, his second daughter, back to elaborate with Miller. "We love Thai people, no matter what, and this country is peaceful," she told him. While Prime Minister Prayuth Chan-ocha was presiding on Tuesday over a bad-tempered special joint session of parliament that failed over two days to find any way through arguably the greatest political impasse in modern Thai history, his main Twitter account @prayutofficial posted video of a royalist rally in Lumphini park. Over a thousand supporters dressed in yellow condemned student-led demands for reform of the monarchy that are open and unprecedented. There has been an avalanche of hashtags as both sides of Thailand’s political chasm embrace social media to rally support. (Nikkei photo)

"With Twitter's greater potential for anonymity and global reach, more people in Thailand are recognizing it as a platform for political resistance and pressure for change," researcher Tracy Beattie wrote in April for the Australian Strategic Policy Institute. "In tweets often intertwined with pop culture references and catchy slogans, Thais are now openly discussing the scandals and shortfalls of not just the military government, but the royal family as well."

#WhyDoWeNeedAKing was reported to have been used over 1.2 million times in a day while the king was in Germany earlier in the COVID-19 pandemic.

Some disproportionate reprisals against social media users have failed to reverse the rising tide. Jatupat "Pai" Boonpattararaksa, a student activist, was arrested in late 2016 for posting on Facebook an unflattering BBC biography in Thai of the new king that was shared by over 2,000 people. Jatupat was released in a mass pardon in May 2019.

The draconian law of lese-majeste is intended to make the monarchy inviolable, and carries prison sentences of up to 15 years. Its use was reduced in 2017 as sedition and computer crime laws were brought to the fore. Severe public criticism of the monarchy has seen lese-majeste restored to the government arsenal in recent weeks.

Even so, Prayuth has been unable to reign in public discourse. When Facebook finally complied with a court order to shut Royalists Marketplace, a page set up in late April by a dissident Thai academic in Kyoto, Japan, the group migrated immediately to a page with a slightly different name. By last Sunday, it had over two million members. Thailand's notoriously ponderous legal system is unlikely to ever catch up.

After student leaders transferred their movement's main operations platform from Facebook to Telegram, the government searched fruitlessly for ways to shut it down in Thailand. Telegram is an encrypted messaging app from Germany based on Russian counter-establishment programming that claims 400 million active users worldwide. A well-known Thai anchor, who asked not to be identified due to legal uncertainties, told Nikkei Asia that he estimates about 20% of the live chanting at protests that have occurred all over the country in recent weeks has been explicitly anti-monarchy. He said it was also often hard to anticipate this because speakers jump between topics.

On Oct. 20, the Ministry of Digital Economy and Society announced that it had obtained a court order to close down VoiceTV - an order that was later rescinded. The government had earlier pressured internet service providers to block the station's broadcasts on the basis of a special emergency decree with broad censorship provisions announced on the morning of Oct. 15.

Attempts to mute livestream broadcasts by Prachathai, The Reporters, The Standard and ThaiYouth also went nowhere. The government has had a minor success, however, with local cable TV network True Visions, which routinely blanks screens when reports from the BBC World Service, CNN or Al Jazeera English come on.

During serious protests in Thailand in 2008, 2010 and 2013, social media was already well on its way to being a national addiction. According to Hootsuite Analytics, Facebook and Line had 93% and 84% of Thai internet users in 2019. Line has over 44 million regular users in a population of nearly 70 million, 53% of whom are female. "Thais are the most relentlessly connected people in the world," according to Lexicon, a digital PR agency based in Bangkok.

Advances in communications played a particularly important role in massive demonstrations in Bangkok in May 1992 against the government of Prime Minister Suchinda Kraprayoon, a former army chief who seized power in early 1991. At that time, expensive mobile telephones and much cheaper pagers gave generally older middle-class demonstrators a new organizational edge.

In Suchinda's pre-digital day, the government effectively controlled radio and TV stations, and had no compunction in intimidating the print media or interfering with satellite feeds. Even so, Suchinda was forced to resign when King Bhumibol Adulyadej finally intervened following serious bloodshed. The flickering images of the barely audible king seated on a sofa berating the prime minister on the palace carpet along with his nemesis, Chamlong Srimuang, another retired general, were broadcast nationally.

King Bhumibol previously intervened during serious unrest in October 1973 when at one point he opened the gates of his palace to provide sanctuary from marauding military. He also met personally with student leaders. There was no such intervention by King Bhumibol in October 1976 when pro-monarchy groups massacred over 40 students at Thammasat University, nor during 21st century political unrest when the king was in declining health and influence.

The optics today are even starker with the king talking openly in public with known belligerent royalists. When the enhanced "serious" state of emergency was lifted on Oct. 22, ineffectual censorship restrictions were also lifted -- enabling royalists to engage with the pro-democracy movement on media platforms without flouting government edicts.

Striking nighttime images of thousands of demonstrators waving illuminated cell phones are reminders that modern protesters are seamlessly connected and come fully equipped with recording devices. As Thailand's war of words and images heightens, getting away with murder has become a lot harder.