"It will be necessary for the government and the concerned security agencies to enhance our measures by enforcing all the pertaining laws against protesters who violate the law or infringe on the rights and freedoms of other citizens," the prime minister wrote in a statement released on Thursday.

So far, police have resorted to water cannon blasts and tear gas in their attempts to disperse youthful demonstrators. On Tuesday, water laced with irritants and colorants were sprayed on protesters who ignored a police order to refrain from approaching parliament. Also on Tuesday, police said dispatched officers were ready to use guns loaded with rubber bullets.

Prayuth's statement suggests something more than irritant-laced water blasts and rubber bullets will be added to police officers' arsenals.

"Security agencies have been doing their utmost to ensure public safety while constantly monitoring developments," Prayuth said in the statement, "with all measures undertaken with carefulness and in accordance with international standards.

"Currently, tensions have not sufficiently abated and may develop into a conflict, possibly involving acts of violence. If this trend continues, it will further damage our country and Thailand's revered institution, as well as risk public safety, including the personal property of many citizens."

Prayuth said he can take the necessary steps to preserve "civility and promote compromise, which is in the best interests for the country and the Thai people."

"This will include prosecutions in accordance with the country's judicial system," Prayuth added.

Most of the leaders of the current pro-democracy movement have been arrested on sedition and other charges, then later released on bail. In the future, Thai authorities may look to apply charges with more severe penalties.

Prayuth implied protesters and their behavior have left him no choice but to escalate law enforcement. "The government and all groups concerned have been trying to find a peaceful solution based on existing legal frameworks and our system as a democratic government with [the King] as the Head of State," the former junta chief said. "Nevertheless, this situation has not shown signs of de-escalating, even though the government has been straightforward and earnest in trying to find a solution." 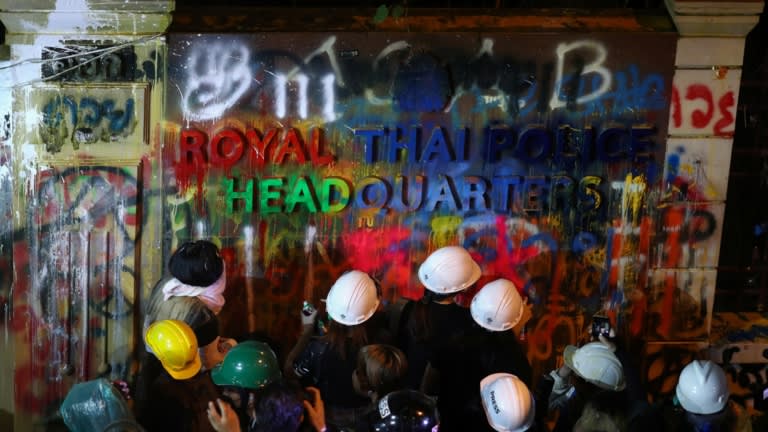 Demonstrators spray-paint a plaque in front of police headquarters during a rally in Bangkok on November 18, 2020.   © Reuters

On Tuesday, protesters gathered to pressure lawmakers to accept constitutional amendments proposed by the nonprofit civic group iLaw. The proposal is aimed at reining in the Senate's effective veto power on amendments and at paving the way for reforming the monarchy.

That and four other proposals were turned down on Wednesday by a joint session of the Senate and House. Only two proposals suggesting that a constitution drafting committee be set up passed. All senators were hand-picked by the junta, led by Prayuth. The pro-democracy protesters are calling for constitutional amendments, reform of the monarchy and Prayuth's resignation.

Apart from a clash between the pro-democracy protesters and police, a skirmish broke out between the youth-led reformists and ultraroyalists who marched on parliament demanding that no amendment motions pass. The factions exchanged blows and projectiles, including rocks and bottles.

"What they did yesterday was to provoke us and incite violence," political activist Parit Chiwarak, known by the nickname "Penguin," posted on Facebook. He called it a ruse to justify another coup. "We need to be careful not to fall into their trap," he said, calling for nonviolence at Wednesday's rally.

Two more pro-democracy rallies are being planned within the next week.