BANGKOK -- Thousands of protesters began to disperse from the seat of Thailand's government Wednesday night after delivering a draft resignation letter for Prime Minister Prayuth Chan-ocha to sign within three days.

The letter's preamble invited him to admit to a raft of alleged transgressions ranging from vote-buying to forcing "a bandit constitution."

The document was received by Prateep Keeratireka, a secretary to the prime minister. The crowds began to leave peacefully at about 9:35 p.m., capping another tense day in the capital of Southeast Asia's second-largest economy.

Earlier, as thousands of protesters -- mostly young people -- marched on Government House, a prerecorded address by Prayuth was broadcast at 7 p.m. calling for a parliamentary solution to the current political impasse and national reconciliation. This follows eight straight days of protests across Thailand.

Demonstrators had already marched 3 km from Victory Monument and reached a roundabout near the Government House by the time the address was aired, eliminating any chance of defusing the immediate situation.

The demonstrators' main demands are for the resignation of Prayuth and his government, revision of the military-drafted constitution, and reform of the monarchy.

Recent criticism of the monarchy has been open and unprecedented -- the "highest institution" was considered untouchable until recent months.

"I will make the first move to de-escalate this situation," Prayuth said. "I am currently preparing to lift the state of severe emergency in Bangkok and will do so promptly if there are no violent incidents." 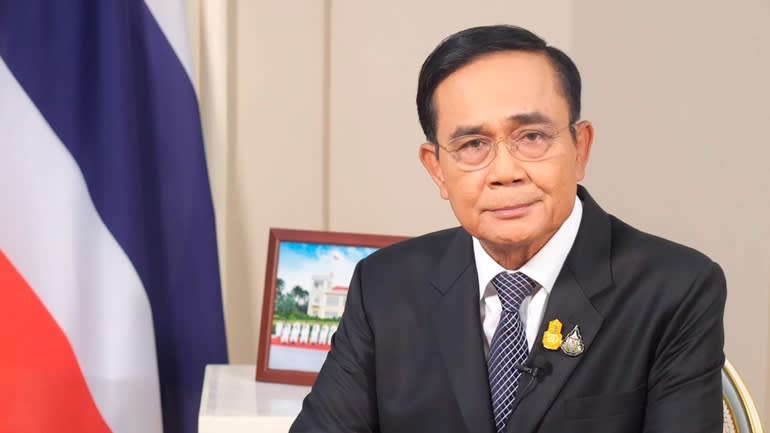 Thai Prime Minister Prayuth Chan-ocha pleaded with his countrymen to resolve their political differences through parliament in a national address Wednesday.   © AP

Lifting the state of emergency and releasing imprisoned student leaders were among the protesters' immediate demands. While 19 leaders were released on Monday, two students and a human rights lawyer who had been most outspoken in their criticisms of the monarchy were immediately rearrested on fresh charges. The government had already reversed course Wednesday on plans to shut down five online news channels, including Voice TV, a liberal-leaning broadcaster owned by the son of former Prime Minister Thaksin Shinawatra. A pro-democracy protester makes a three-finger salute during a march towards Government House Wednesday.    © Reuters

Prayuth, Thailand's premier for the past six years, is an often blunt-spoken and irascible former army chief who seized power in a coup in 2014. With a reputation for flip-flopping on election dates and constitution promises, he was uncharacteristically conciliatory in the address: "The protesters have made their voices and views heard," he said. "It is now time for them to let their views be reconciled with the views of other segments of Thai society through their representatives in parliament."

"My duty as a national leader is to look after the needs of everyone in this country, and to try and balance sometimes very different and very extreme views so that we can all live together in this one land that belongs to us all and which we all love," he said.

Prayuth appeared to concede that tensions have risen dangerously high across the country. "We must now step back from the edge of the slippery slope that can easily slide to chaos, where all sides lose control of the situation, where emotions take over our better judgment, violence begets more violence, and, as history has shown us all many times, we can end in a situation where the entire country suffers."

Some observers faulted him, however, for implying that protesters were to blame: "Last Friday night, we saw things that should never be in Thailand," he said. "We saw terrible crimes being committed against the police using metal rods and huge cutting implements in brutal attacks, with the aim of severely wounding fellow Thais."

The government has been heavily criticized after it used water cannons, tear gas and skin irritants Friday on peaceful protesters who were on the verge of dispersing because of heavy rain.

Earlier Wednesday, thousands of royalist Yellow Shirts took to the streets of Sungai Kolok district, a border crossing to Malaysia in the southernmost province of Narathiwat. A royalist dressed in yellow, the royal color, holds an image of Thailand's late King Bhumibol Adulyadej, who died in 2016 and was succeeded by his son, King Maha Vajiralongkorn.   © Reuters

The march was the largest show of opposition so far to the daily youth-led protests staged in Bangkok and the provinces.

Royalists began gathering in some places on Oct. 14, but have not achieved the size and frequency of the pro-democracy turnouts.

Organizers announced at 3 p.m. a major pro-democracy rally at Victory Monument in central Bangkok from 4 p.m. and another at Ramkamhaeng University in the northeastern part of the city.

They later announced the march along a barricaded route from Victory Monument to Government House.

"Until now, the monarch has never caused any harm to the Thai people," Dr. Rienthong Nanna, a prominent royalist, and director of Mongkulwattana Hospital, recently posted on Facebook. "Why do they ask for the monarchy reform?"

After a slow start, Yellow Shirts have become more active in opposing pro-democracy groups, prompting concerns about clashes, social disorder and further damage to the economy.

There was also a smaller gathering in Chonburi Province on Tuesday near the resort city of Pattaya, over 100 km from the capital. In the northern city of Lampang, a crowd of 500 formed calling for respect for the monarchy.

"It's OK if both sides want to stage protests to express their political views peacefully," an analyst at KGI Securities told Nikkei Asia. "It will not be OK and have a very big impact on the economy if there is a clash and violence."

Police have been watching protests in Bangkok closely to avert possible confrontations, but rally sites are revealed on social media at very short notice, sometimes bringing them close to pockets of royalist supporters.