BANGKOK -- Pro-democracy demonstrations in the Thai capital saw Germany's embassy become the focus Monday as the throngs of protesters gathered in front of the mission asked Berlin to investigate whether King Maha Vajiralongkorn is inappropriately conducting state business on German soil.

By 7:15 p.m., at least 10,000 mainly young people had crammed in front of the embassy, located on Sathorn Road in a major residential and business area. Reporters were hard-pressed to estimate a more exact figure with so many people beyond view. The rally wrapped up without incident around 9 p.m.

Germany is of particular interest to Thailand's young pro-democracy protesters because its southern state of Bavaria is most of the time the preferred residence of the king, who acceded to the Thai throne in 2016.

A dense media presence around the embassy gates for a while hindered protesters attempting to deliver a letter. The letter enumerated long-standing demands and noted that Prime Minister Prayuth Chan-ocha had not resigned by a deadline of 10 p.m. Saturday.

The letter was read out in Thai, English and German before three protesters were allowed through to deliver it. Pro-democracy demonstrators pose heartfelt questions in German outside the German embassy in Bangkok on Oct. 26.     © Reuters

The most important element from the German government's perspective was the demand for an inquiry into the king's movements: "We request the German government to conduct an investigation and disclose King Maha Vajiralongkorn's entry and departure records, in order to determine whether His Majesty has exercised the sovereignty on German soil."

The letter listed specific state documents that may have been signed while the king was in Germany. It also questioned whether he owes 2.7 billion euros ($3.2 billion) under German inheritance laws on the basis of the estimated 10 billion euros bequeathed by his father, King Bhumibol Adulyadej, who died in 2016.

The embassy had earlier issued a "note verbale" in support of "the right of peaceful assembly of the citizens of the Kingdom of Thailand" and asked only for a "proportionate level of protection" during the pro-democracy rally that was expected to start late Monday afternoon. The statement appeared to be on German Embassy letterhead and began circulating online.

A staffer at the embassy contacted by Nikkei Asia declined to confirm the statement, but no effort has been made to dispute its authenticity. The embassy closed early, and telephone calls to its main switchboard went unanswered.

Reuters, meanwhile, reported from Berlin that German Foreign Minister Heiko Maas is being kept appraised of the situation here. "We are monitoring this long-term," Maas said. "It will have immediate consequences if there are things that we assess to be illegal." Germany had previously said it would be unacceptable for the king to conduct affairs of state from there. 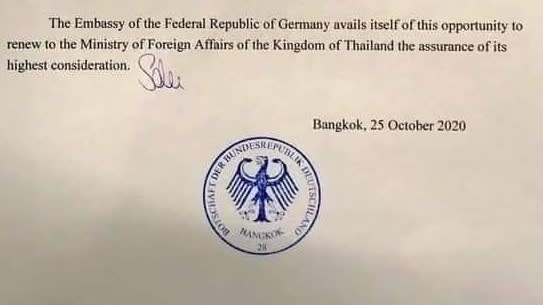 Germany's embassy in Bangkok has issued a "note verbale" supporting the right of ordinary Thais to protest and requesting "proportionate" state security arrangements for its premises and staff.

Over the weekend, student leaders announced the 2 km march from the Samyan intersection in central Bangkok to the German Embassy to draw attention to the king's residency in Europe.

The students were due to arrive at about 5 p.m. but were preempted by hundreds of royalists in yellow who turned up at about 2 p.m. and began singing the national anthem.

The royalists were led by lawyer Nititorn Lumlua who said the intention was to supply Germans with correct information about the political situation in Thailand. The group also submitted a letter to an embassy official.

There were no reports of confrontations or violence, and the royalists said they would move on before the student-led protesters arrived. They began dispersing at 2:50 p.m.

Around three companies of riot police were on standby to take care of the situation and safeguard the embassy.

Observers noted that the royalists had no difficulty reaching the embassy gates but that police were bringing up barricades for the later protest.

In the morning, a special joint session of parliament got underway to discuss how the recent youth-led protests should be addressed.

The deployment at one rally of riot police who used water cannons, tear gas and skin irritants on peaceful protesters about to disperse because of heavy rain has attracted heavy criticism domestically and internationally.

"The cabinet agreed [the protests] are a major problem that affects the governance of the country," a cabinet document released Thursday stated ahead of the joint sitting of the lower and upper houses of parliament.

Although no agenda has been announced for the joint session, the protesters' key demands are for the resignation of Prayuth and his cabinet, constitutional changes drafted by representatives of the people, and reform of the monarchy under the constitution -- but not its abolition.

"I am prepared to propose a referendum to show the government's support for the constitutional amendment," Prayuth said Monday. He revealed that the government and the ruling Palang Pracharath Party have agreed to proceed with amending the constitution. Observers note that this would require a national referendum on any changes, which is likely to be a very time-consuming process.

Special parliamentary sessions are by law not allowed to vote on any resolution, but recommendations can be made. The first day of the joint session started at 9 a.m. and was due to run until 10 p.m.

"We have a two-day opportunity in the parliament to discuss important matters, to collaborate, to think together, and to be constructive for the benefit of the country," Prayuth said in opening remarks.

Sompong Amornwiwat, leader of the opposition Pheu Thai Party, called on Prayuth to resign for mismanaging the political strife. He urged the prime minister to open his mind to the concerns of the young protesters, to stop delaying constitutional reforms, and to release all student leaders still in detention.

Paiboon Nititawan, a member of Palang Pracharath in the ruling coalition, called for a national referendum to find out if there is wide support for the protests. "I believe a majority of Thai people would disagree with rallies that violate the monarchy," he said.

Last week's cabinet document also mentioned the COVID-19 pandemic, which has dealt a severe economic blow. The daily protests have drawn thousands, mainly from high schools and universities, and created a national political impasse. Although there has been little local transmission of COVID-19 reported in recent months, the government has stoked concerns that the rallies could create new hot spots.

Many observers doubt the parliamentary deliberations will bring any political resolution, given the depth of the divisions that have opened up in recent months. Protesters dismiss them as a government whitewash.

Tensions have also bubbled up around the parliament. Royalist and conservative groups gathered outside the building on Sunday evening and demanded that the monarchy remain inviolable.

According to the chief government whip, Palang Pracharath's Wirach Ratanasate, opposition parties have eight hours to debate and propose solutions to all issues, while the government and the military-appointed Senate have around five hours each.

Palang Pracharath has identified a group of eloquent parliamentarians to speak up for Prayuth's government.