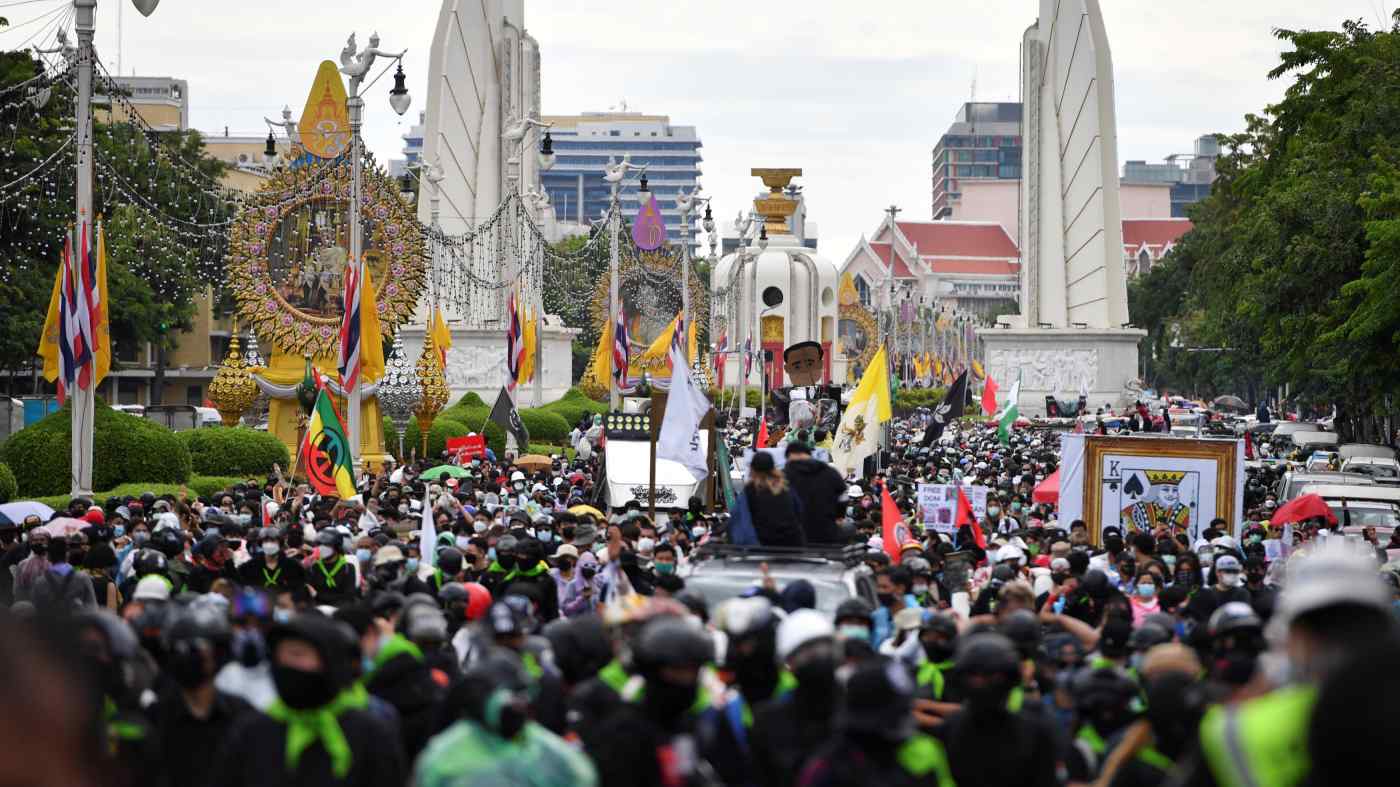 BANGKOK -- Criticism of Prime Minister Prayuth Chan-ocha's government is growing as Thailand's mishandling of the COVID-19 outbreak becomes clearer with the spread of the highly contagious delta variant of the coronavirus.

Once seen as a model for containing the pandemic, Thailand has joined Indonesia and Malaysia among those hardest hit by the delta strain in Southeast Asia. Cases reported in the region's second-largest economy exceeded the 400,000 mark on Sunday, with average daily infections passing 10,000 recently.

On Monday, Thailand reported 11,784 cases -- a new record for the fourth straight day -- along with 81 fatalities.

Bangkok is the epicenter of the recent outbreak. A lockdown that has been in place since July 12, with a curfew from 9 p.m. to 4 a.m., will be tightened and extended to more provinces from Tuesday. Public gatherings involving more than five people have been banned. But the measures have failed to stop hospitals from being swamped by newly infected patients. Many were recently forced to sleep in the open near a hospital on the Rama 2 arterial road, awaiting treatment.

Vaccine shortages have made the situation worse. Although the government has approved several vaccines, its inoculation program relies heavily on locally produced AstraZeneca vaccine made by Siam Bioscience, a company owned by King Maha Vajiralongkorn.

Leaked letters between Public Health Minister Anutin Charnvirakul and AstraZeneca raised doubts about the government's capacity to secure enough vaccine. "Based on our best ability to forecast monthly supplies while the supply chain is still very new, we believe that in an average month with uninterrupted manufacturing Thailand [Ministry of Public Health] will receive approximately five to six million doses," wrote Sjoerd Hubben, AstraZeneca vice president of Global Corporate Affairs, in a letter dated June 25.

"I hope you will be pleased that this is nearly the volume we discussed during our meeting on [Sept. 7], when your team estimated that Thailand's healthcare system required approximately three million doses per month," he continued.

Anutin wrote back on June 30, "We are expecting to receive more than one-third of the supply from AstraZeneca as mentioned in your letter or at least 10 million doses per month for our domestic use, hence a more constructive and serious discussion on this matter is urgently required."

The letters were posted by local media ISRA News on Saturday and quickly spread on the Internet. Prayuth has occasionally told Thai citizens that his government would secure 100 million doses of AstraZeneca by the end of the year. The letters suggest no such contracts have been reached. A health worker administers a dose of the AstraZeneca COVID-19 vaccine to a woman at the Central Vaccination Center in Bangkok on July 14.    © AP

Of the 174.6 million doses AstraZeneca was contracted to manufacture in Thailand, 34.9% will be provided to Thailand and the rest will be exported to Indonesia, Malaysia, the Philippines, Vietnam, Brunei, Taiwan and the Maldives, according to the leaked letter from AstraZeneca. Asking to allocate more vaccine to Thailand would create diplomatic conflict.

Deputy Public Health Minister Sathit Pitutecha told the English-language Bangkok Post on Thursday that AstraZeneca had asked Thailand to extend the timeline for the delivery of 61 million doses from the end of the year to next May. The delivery schedule in the letter suggests that AstraZeneca never committed to completion of delivery by the end of this year.

In the letter, AstraZeneca also advised Thailand to join the U.N.-backed COVAX, the vaccine-sharing program mainly for middle-income and poorer countries. Thailand is among a handful of countries that have not joined the mechanism.

Failure to secure enough vaccine will leave residents of Thailand vulnerable to the pandemic for longer than anticipated.

In the Thai medical community, there is a heated debate between virologists and the government on mixing shots from different manufacturers. Chulalongkorn University professor Poovorawan suggested administering AstraZeneca vaccines to those who have received China's Sinovac vaccine for their first dose.

The epidemic in Indonesia, which has relied heavily on the Sinovac shots, offers evidence that they may not provide sufficient protection against the delta variant. The idea of mixing vaccines, which the World Health Organization has advised against, may not be possible in any case without timely delivery of the AstraZeneca shots.

Reflecting the recent missteps, a nongovernmental research organization, the Thailand Development Research Institute, published a report critical of the Prayuth government. The report is a midterm assessment of Prayuth's four-year term.

"With the government's mistakes in containing the disease and management of vaccinations, Thailand has entered a health and economic crisis once again, to the extent that it has lost the opportunity for a speedy recovery and a competitive edge on the global stage," the report said.

"Someone must be held accountable for such mistakes, it added. "Fact-finding and in-depth analysis should be sought by establishing an independent committee to learn from the mistakes and prevent a repeat."

Such a committee was set up after the 1997 Asian Financial Crisis, to strengthen the country's financial system. The institute's suggestion hints that the pandemic could be as politically devastating as previous crises in Thailand.

The report is only one of many criticisms the government has faced. Defying the lockdown, roughly a thousand of pro-democracy protesters took to the streets on Sunday, calling for Prayuth's resignation, a cut in the budgets of the monarchy and the military, and the provision of mRNA vaccines. While marching to Government House, the demonstrators and some journalists were hit by police water cannons, tear gas and rubber bullets. Several were left injured.

On July 7, an opposition political party formed by veteran politician Sudarat Keyuraphan launched an online petition attacking the government's handling of the delta epidemic. The campaign had collected 650,000 signatures as of Friday. 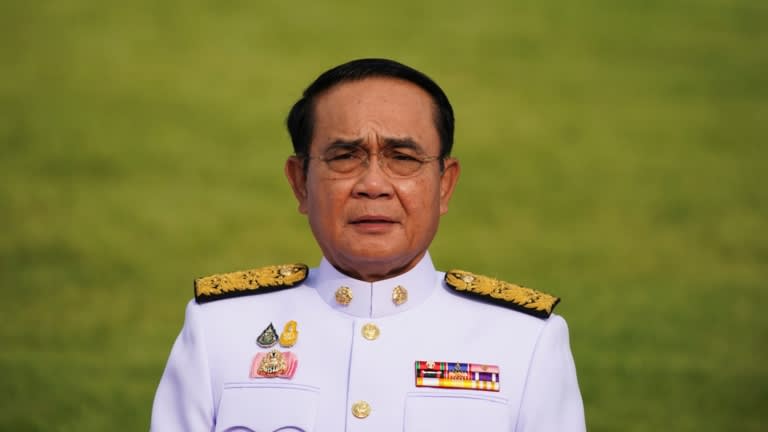 The government of Prayuth Chan-ocha has countered criticism by further curtailing freedom of speech in Thailand.   © Reuters

The decree now outlaws "distortion of information and news that causes misunderstanding during the emergency; presentation and dissemination of news in books, published material, and other media that contains messages that incite fear in the public; or intentionally distorting information to create misunderstandings that impact state security, peace, and public morality."

Human rights group Internet Law Reform Dialogue (iLaw), points out that the emergency decree in place since March 2020 only prohibited the presentation of fake news and false information about the COVID-19 that causes panic.

On Thursday, Seksakol Atthawong, assistant minister at the Prime Minister's Office, and Sonthiya Sawasdee, adviser to the House Committee on Law, Justice and Human Rights, filed charges against Sudarat for inciting unrest and defamation.