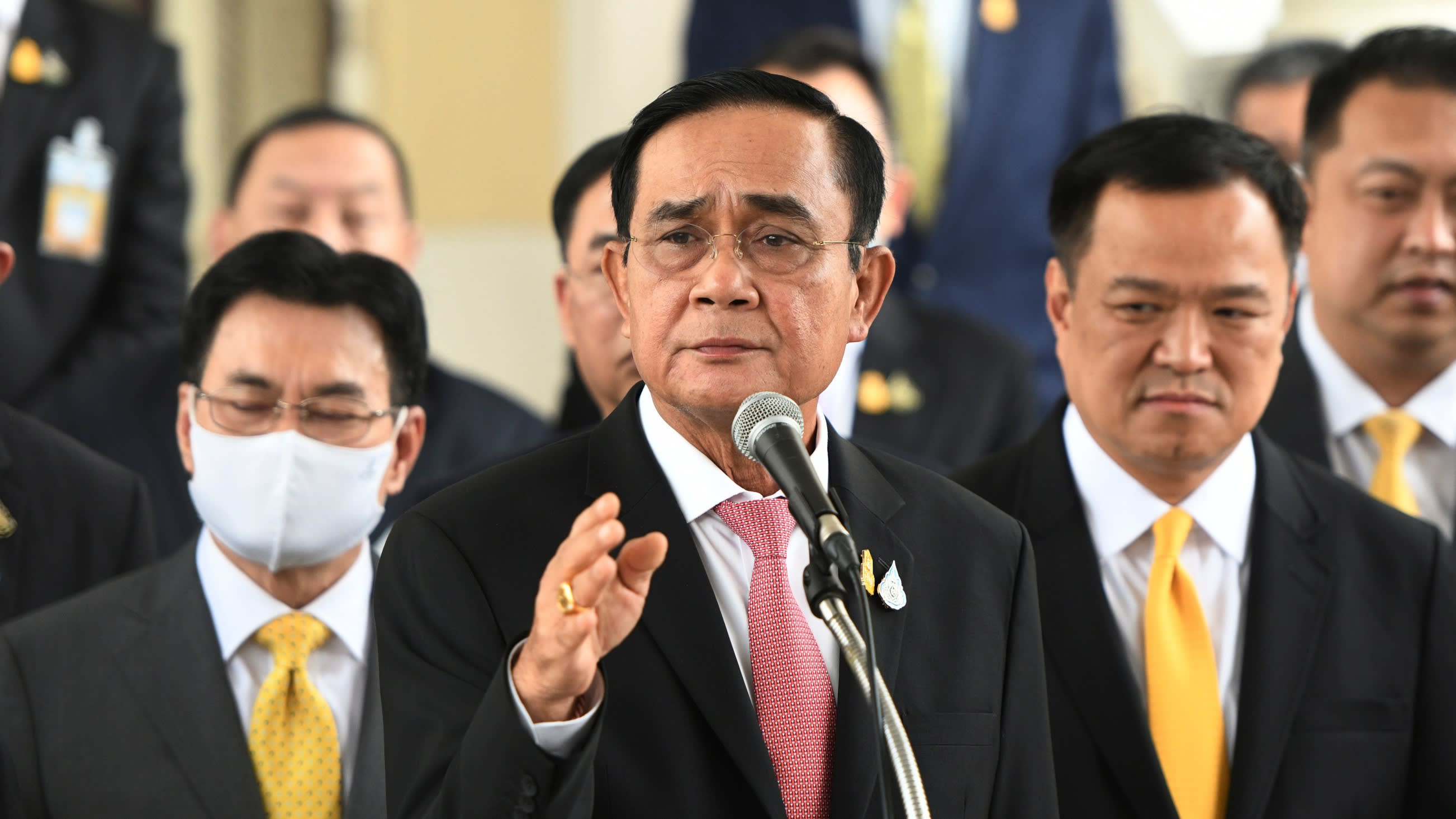 Thailand's Prime Minister Prayuth Chan-ocha speaks to the press after a special cabinet meeting on Friday Oct. 16, 2020, saying that the government hoped to drop the state of emergency over protests in Bangkok 'if the situation improves quickly'.    © AP
MASAYUKI YUDA, Nikkei staff writerOctober 19, 2020 20:03 JSTUpdated on October 20, 2020 00:02 JST | Thailand
CopyCopied

Youth-led demonstrators gathered again on Monday in new locations after an online poll conducted by activist group Free People voted to hold more rallies instead of resting for a day.

The overall situation was quieter than in recent days, with the main focus in Bangkok at Kasetsart University's campus in the northern part of the city. Estimated thousands of protesters turned up there to listen to speeches before dispersing early at about 7:30 p.m.

There were also demonstrations outside Bangkok Remand Prison, where a number of student leaders are being detained, and at a mass transit station near the Ministry of Public Health.

The United Front of Thammasat and Demonstration, one of the key protest groups, issued an ultimatum promising "a suprise" tomorrow if there is no response to protesters' demands.

The authorities have been attempting to disrupt the social media protesters who have been using to communicate. The Ministry of Digital Economy and Society today ordered the National Broadcasting and Telecommunications Commission to instruct internet and mobile service providers to block Telegram. Protesters were told to go over to the popular encrypted messaging app because of concerns about Facebook pages being deleted.

Four Thai-language media outlets -- Voice TV, The Standard, The Reporters and Prachathai -- were meanwhile threatened with closure for their online reporting. Same Sky, a small publishing house, was raided and had books confiscated by police.

The protests are now into their sixth straight day since Wednesday, defying the rules laid out in the serious emergency decree which came into force last Thursday morning.

Organizers disclosed three rally locations for the day -- the Ministry of Public Health station on the MRT transit line, Bangkok Remand Prison and the nearby Kaset intersection. All are located in the north of the city and away from the most important transport arteries.

Rallies on Sunday were held sporadically to avoid a concentrated police crackdown. A rally on Friday at Pathumwan intersection, one of the major crossings in the commercial and retail heart of Bangkok, was dispersed after the police used water cannons and tear gas. The violence directed toward the crowd of mostly high school and college students met strong criticism domestically and internationally.

In a briefing on Monday, the police said a rally at Victory Monument roundabout on Sunday drew 12,000 demonstrators, while another at Asoke intersection saw 2,000 protesters. Several media outlets cited higher attendance figures.

In a desperate effort to discourage people from attending protests and despite the economic impact of taking such measures, the police have in recent days ordered public transportation such as the skytrain and subway to periodically stop operating. As well as the disruption to the functioning of the city, businesses around the rally venues have also been affected.

But, despite the efforts from government, the protesters reached the venues using other means such as motorcycle taxis or walking.

The damage to the country's reputation and economy, as well as concerns for any further escalation to the situation, have prompted Thai lawmakers to seek a formal discussion on the matter. House Speaker Chuan Leekpai held a meeting on Monday with leaders of all the political parties to call a special session of parliament to debate how to deal with the current political division.

Thailand's parliament is currently in recess. It was originally scheduled to reconvene from Nov. 1.

The outcome of the leaders' meeting has not yet been made public, but an extraordinary session is likely to go ahead as many political parties, including those in the ruling coalition, have consented to take part.

Prayuth, ahead of the house speaker's suggestion, confirmed his administration's support for convening an extraordinary session to ease the political tensions. However, he denied that he felt pressured to deal with the issues raised by the protesters.

From the outset of the pro-democracy movement, the protesters' demands have been for the resignation of Prayuth and his cabinet, constitutional changes drafted by representatives of the people, and reform of the monarchy under the constitution -- but not its abolition. Demonstrators are also increasing pressure on the government to release the detained leaders.

The protests gained further momentum in late September when parliament tabled motions to consider amendments to the constitution, instead of voting on them.

Meanwhile, the country's political parties have started laying out their stance on the current conflict. Palang Pracharat Party, the largest in the ruling coalition, said it stood for democracy with the king as head of state, to help people to have good quality of life, and to support constitutional amendments through the parliamentary process. The Democrat Party, also part of the ruling coalition, called for there to be no violence in solving the current issues, and also said the process of amending the constitution should be sped up.

Pheu Thai Party, the largest opposition party in the parliament, asked for the immediate release of arrested protesters. It also suggested the prime minister should lift the serious emergency declaration, which had allowed the severe clampdown, including a ban on gatherings of more than four people.

"Pheu Thai Party would like to [say] that we are concerned for the students and the people who have come out to exercise their rights and their liberty to publicly express their political opinions," Prasert Jantararuangtong, secretary-general of the party, wrote in a statement. The party recognized that the protests were being held in a peaceful manner, without weapons and within citizens' rights under the constitution.

"We call on the government and state officials to stop the use of force, in any form," he added.