The fundraiser was organized by the Palang Pracharat Party, or People's State Power Party, to finance its campaign for the general election expected for February.

The party, formed earlier this year, is believed to be rapidly attracting the nation's rich and powerful, including military officers, bureaucrats and business tycoons of leading conglomerates. Four incumbent cabinet members hold key party posts, including party head. The opulent event demonstrated the group's ability to quickly build up a massive war chest.

With an avalanche of support from the nation's movers and shakers, Palang Pracharat stands out among the many pro-junta political groups that have recently emerged, making it the most formidable opponent facing other parties, such as the Pheu Thai Party and Democratic Party.

"I was invited to the party by a person linked to Deputy Prime Minister General Prawit Wongsuwan," said Adul Daoreung, a 50-year-old politician from Ayuthaya Province. The deputy prime minister is known as one of the junta's heavy hitters. "I decided to switch parties because [Palang Pracharat] promised to nominate me as its official candidate," said the former Democratic Party member, who lost to a Pheu Thai candidate in the previous election. 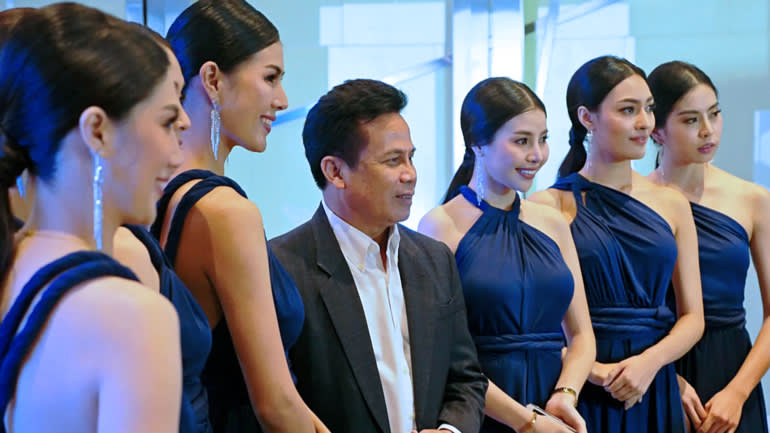 Guests paid at least 300,000 baht each to attend the opulent December fundraiser in Bangkok. (Photo by Hiroshi Kotani)

The banquet organizer had forecast a huge turnout. Two hundred tables, each seating 10 people, were set up in a 2,000-sq.-meter banquet hall. Entrance to the event was similarly large, with attendees forking over at least 300,000 baht ($9,200) each. Some donated more, as the banquet raised nearly 10% more than the target figure of 600 million baht, according to local media -- a record for a Thai fundraiser.

Just before the start, party bigwigs -- including the head of the party, Industry Minister Uttama Savanayana -- arrived to greet guests in traditional Thai fashion, bowing slightly with palms pressed together in front of the chest. Uttama is expected to lead the charge into the election with Prime Minister Prayuth Chan-ocha, a retired army general, seeking to retain his current post.

Guests were treated to a full-course dinner of smoked salmon, oven-grilled fish and more while being entertained by famous Thai singers, one who sang "One Moment in Time," a hit by the late Whitney Houston. The track was likely chosen to fire up the crowd with its stirring lyrics: "I want one moment in time, when I'm more than I thought I could be, when all of my dreams are a heartbeat away."

Other Democratic Party defectors could also be found, such as Siriphan Hemsut from the northeastern province of Amnat Charoen. The current government is "trying to help the people," the 37-year-old said. "I hope that Palang Pracharat will win to allow Prayuth to remain in power."

Despite Palang Pracharat's image as a pro-business political force, many of its supporters praise the government's efforts to help low-income earners. Khannoy Pattamanond, 63, whose husband is a local administrator in Bangkok, said the government has "done a good job of assisting low-income earners by saving them from loan sharks and giving them land."

For over a decade, Thailand has been embroiled in a bitter political conflict between supporters of former Prime Minister Thaksin Shinawatra, whose constituency comprises many poor farmers, and the anti-Thaksin camp, which includes the military and conservative establishment.

Many at the event are eager to see an end to the political warfare that has hindered the country's economic growth. But there is no guarantee that continued military rule will lead to reconciliation between the two camps. The junta's biggest achievement has been restoration of law and order in the sharply divided country, albeit via draconian measures such as banning political activities and corralling free speech.

It is by no means clear whether the Palang Pracharat Party has a workable plan to reconcile the country's differences.

"If we hold on together, I know our dreams will never die," crooned a female singer performing a cover of Diana Ross' "If We Hold On Together."

Will the two opposing camps ever "hold on together?" The extravagant banquet offered no real clues, beyond demonstrating the new party's ability to attract well-heeled donors.