Turnout of over 20,000 at peaceful rally shows growing demand for reforms BANGKOK -- Thailand's free-speech advocates demanding democratic reforms are winning increasingly open support from academics, celebrities and a broadening swathe of the public as the authorities and royalist establishment attempt unsuccessfully to silence them.

Free People, an activist group that morphed out of student-led Free Youth, organized the biggest rally to date on Sunday afternoon at Democracy Monument near the administrative heart of Thailand's capital.

The Metropolitan Police Bureau put the number of protesters at about 12,000, but a policeman on the ground told the Nikkei Asian Review that around 20,000 had turned out.

An experienced foreign observer at the scene estimated the crowd, which stretched into the streets leading off from the monument's large roundabout, to be approaching 25,000.

But even the lowest estimates made this by far the largest political gathering Thailand has seen since the military staged a coup in 2014. 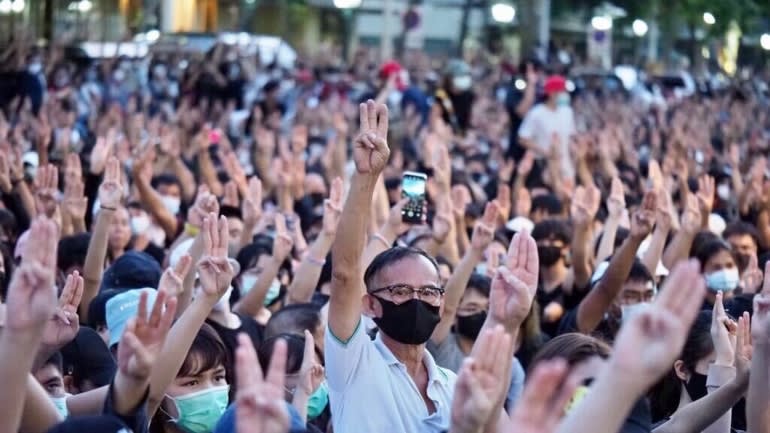 At least 600 policemen had been assigned to block access to the monument itself, and to patrol the surrounding areas, and they were in normal uniforms.

Activists have, however, been tailed by security officers in plain clothes in recent weeks. The police are believed to have 31 under surveillance and targeted for possible arrest.

On Friday, Parit Chiwarak from the Student Union of Thailand, was arrested by four policemen who struggled to manhandle his significant mass. Parit -- better known as Penguin -- was released on bail soon after Sunday's protest got going.

In the morning, about a hundred royalists held another rally at the same spot. One banner read: "You can chase anybody, but don't touch the Chakri dynasty" -- a reference to the 238-year-old House of Chakri that has ruled Thailand, formerly Siam, through ten reigns.

The current incumbent, King Maha Vajiralongkorn, is also known as Rama X. He acceded in 2016 but is resident most of the time in Germany.

"I want leaders of the country to think of public benefits rather than themselves," said Bia a 38-year-old native of Surat Thani province, who travelled 500km to attend the rally.

Many protesters wore black t-shirts. They were joined by others in red shirts signaling their allegiance to Thaksin Shinawatra, the populist prime minister ousted by the military in a coup in 2006.

The demonstration was well organized, with cooked food and cold drinks available -- essential sustenance in the exceptionally humid monsoon climate.

A possible dampener on proceedings failed to materialize. The capital has seen heavy rain in recent weeks, mostly in the late afternoon and evening. Instead, as dusk approached, massive sunbeams from behind a cloud provided a spectacular backdrop to the art deco monument that in darker times past has been the scene of significant political violence.

As darkness approached, the overwhelmingly peaceful crowd sat on the street waving lights from their cell phones above their heads. Many stayed beyond the planned 9 p.m. ending. Bangkok's protesters on Sunday held up banners in different languages and chanted repeatedly: “Down with dictatorship! Long live democracy.” (Photo by Masayuki Yuda)

Free People was established on Aug. 7 to facilitate broader public support for political reforms. Three of the main demands being pressed are for an end to official harassment that inhibits people exercising their rights; rewriting contentious parts of the military-drafted constitution; and dissolving parliament.

The group has also called for an end to coups and national unity governments, and pointedly for a "democratic form of government with the monarch under the constitution."

"Once the constitution is rewritten, every true demand of the people will be spoken of and recognized," Free People said in a statement released on Wednesday. "Moreover, under the constitution, all are equal without any exception."

The constitution, Thailand's 20th since 1932, was drafted at the military's behest, and adopted after a national referendum in 2016. It gives 250 military-appointed senators a large say in choosing the prime minister, and an effective veto on constitutional reform.

There have recently been smaller protests in over 45 of the kingdom's 76 provinces. Originally protesters called for a change of government and constitutional reforms, and avoided open criticism of the monarchy.

Matters moved in a fresh direction on July 18 at a protest organized by Free Youth when human rights lawyer Arnon Nampa broke a major taboo and called for a public debate on the role of the kingdom's highest institution -- the monarchy.

The issue gained momentum on Monday at a protest at Thammasat University when ten proposed reforms to the monarchy were read out by Panusaya Sithijirawattanakul, spokesperson for the Student Union of Thailand.

Sunday's speakers called again for broad reforms, including of the monarchy, but did not revisit the ten specific demands made at Thammasat. Instead, students mingled in the crowds to share their views.

The ten demands included revocation of the law of lese-majeste, a reduction in public spending on the royal family, a clearer distinction between royal and public assets, and abolition of the privy council along with other "unnecessary units." The Thammasat speech on Monday drew repeated applause.

Arnon appeared on stage on Sunday, and said: "Our mission is to transform Thailand to true democracy -- the mission should end with our generation.

The political discontent comes at a time of increasing economic hardship brought on by the COVID-19 pandemic. Southeast Asia's second largest economy is expected to contract by 8.1% this year, according to the Bank of Thailand.

Students have tapped into public resentment by also drawing attention to a justice system that many feel affords impunity to the rich and powerful. Vorayuth Yoovidhya, grandson of billionaire Red Bull co-founder Chaleo Yoovidhya, was accused of killing a police officer while intoxicated in a hit-and-run incident in 2012, but fled abroad before his arrest. The case was quietly dropped by the attorney general's office in January and news of his legal absolution only surfaced in July.

Authorities have already tried to clamp down on activists. Arnon was arrested on Aug. 7 on a variety of charges, including alleged sedition. He and a colleague were released last weekend on bail after some 200 students gathered outside the police station where they were being detained.

"Thai authorities have routinely enforced censorship and gagged public discussions of rights, political reforms, and the monarchy," said HRW. It noted that Thailand became signatory in 1996 to the International Covenant on Civil and Political Rights, which protects rights to freedom of expression and peaceful assembly.

The Royal Thai Police deputy spokesperson, Col. Kissana Phathanacharoen, raised concerns on Thursday over the rallies, and said officers would be deployed to beef up security on Sunday.

Tanu Sukbamphoeng, a royalist lawyer, called for enforcement of the law of lese-majeste, which is meant to protect the monarchy from hurt. After proving counterproductive, the law fell out of use in 2017, and the authorities resorted to other control mechanisms, including the law of sedition and the Computer Crimes Act.

Prime Minister Prayuth Chan-ocha talked about the rallies at a news conference on Thursday. He called on authorities to probe the financing of the protests and to identify their backers. He said that was standard procedure, and did not require specific orders from him.

Speaking on national television the same day, the prime minister struck a more conciliatory note. "Let the young lead the way and provide the moral leadership to show us all how to take the hard path of collaboration with people who may disagree with us during times of national hardship," he said.

According Traisuree Thaisaranakul, the deputy government spokesperson, Prayuth has told authorities to be patient and show restraint if goaded by protesters. He said forceful control measures were to be avoided, but also warned protesters not to violate the rights of others.

Prayuth has been running the country under a state of emergency since March during the COVID-19 outbreak. The emergency rule gives him power to limit normal rights, including freedom of assembly.

No local transmission of the virus has been detected in the past two months, and the prime minister has not so far invoked his emergency powers to contain the rallies.

The student-led activism has meanwhile been gaining traction. A group of 147 university faculty members from across the kingdom said the proposed reforms did not violate criminal law in relation to the king. "Thai society should learn to raise the ceiling of tolerance and converse with reason for the sustainability of democracy in society," the group said.

Another group of 358 scholars from the Thai Academic Network for Civil Rights also stood with the protesters. "Universities should remain a place where people can raise questions and seek peaceful solutions for society together," it said.

Some young Thai celebrities have voiced their support for freedom of speech on social media. Among them was the popular girl band BNK48.

"I respect Arnon's boldness in daring to speak out about the truth in public," said a 60-year-old noodle shop owner who attended with one of his children, a Thammasat student. "Power never truly belongs to the people -- Thailand has become like Myanmar in a way."