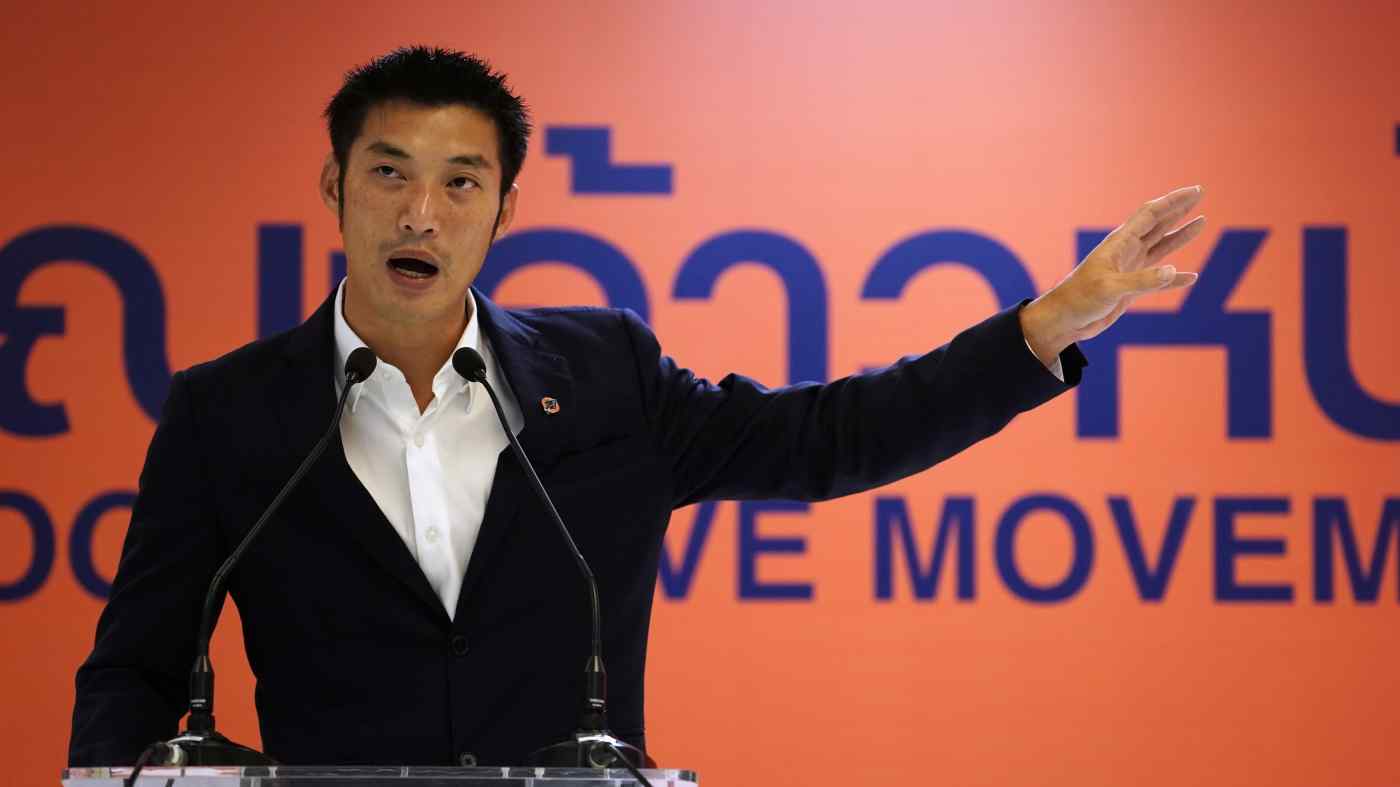 Thanathorn said the case against him was "politically motivated" and insisted on his innocence in a news conference on Thursday. Thai people deserve to know the truth of what is going on with their vaccines, he said.

The Digital Economy and Society Ministry filed the royal defamation charge as well as a violation of the country's Computer Crime Act against Thanathorn to the technology crime suppression division of the police on Wednesday.

The move came only two days after the 42-year-old billionaire ran a live online broadcast that questioned the role of Siam Bioscience in producing coronavirus vaccines in Thailand. Thanathorn made 11 critical remarks about the monarchy.

As of April 13, 2020, all but two of the company's total of 48 million issued shares belonged to the king. The two were owned by an air chief marshal and a police colonel, respectively. The Crowne Property Bureau, which manages King Vajiralongkorn's assets, used to hold most of Siam Bioscience's shares, but they were transferred to the king's direct possession sometime between April 20, 2018 and April 29, 2019, according to documents obtained by Nikkei Asia.

The government has accelerated the use of lese majeste since November, when Prime Minister Prayuth Chan-ocha said the government "will intensify its actions and use all laws, all articles, against protesters who broke the law." At least 54 activists including minors have faced the charge in recent months, according to Thai Lawyers for Human Rights. Some protest leaders are facing multiple lese-majeste charges.

Prayuth's cabinet approved plans to purchase a total of 63 million doses of COVID vaccines. Of those, 26 million shots have been assigned exclusively to Siam Bioscience to be produced domestically using a recipe from AstraZeneca shared through a technology transfer deal.

In the broadcast, Thanathorn did not explicitly criticize the awarding of the deal to the company. Instead, he questioned Siam Bioscience's experience in vaccine-making, and said the government was relying too much on a company with limited credentials in the area.

"It's too late before they realized that most of the vaccines have been bought out," the politician said in the broadcast. "I have to ask whether the government is prepared to handle the risk of putting all hopes on a single company."

Prayuth slammed Thanathorn's claim on Tuesday. "It's all distorted and not factual at all," he said. "I will order prosecution for anything false that gets published, whether in [traditional] media or social media."

According to a government database, Siam Bioscience registered a total revenue of 157 million baht ($5.3 million) for 2019. Its total assets were recorded at 4.5 billion baht. The charges did not discourage Thanathorn from voicing his doubts. "Why is the government doing so much defending in the name of a private company? Is it actually admitting that a special privilege has been granted to this private company?" he posted on Facebook after the Digital Economy and Society Ministry filed the complaint.

This is not the first legal challenge faced by Thanathorn. He formed his own pro-democracy Future Forward Party in 2018. In general elections in the following year, the party won 81 out of 500 lower house seats in Thailand. Its progressive campaign to cut the military budget and pursue bold reforms created many enemies, especially among the establishment.

In November 2019, Thanathorn was stripped of his status as a parliamentary member by the Constitutional Court, as he failed to entirely relinquish his media shareholding before running for office. The court later ordered his party to disband as it was accused of receiving illegal funding from the leader. Pro-democracy activists took these developments as legal harassments, and took to the streets to protest the overreach of the government.

The lese majeste law, or Article 112 of the criminal code, is the most draconian of its kind in the world. Defendants face up to 15 years in jail per offense, with consecutive terms possible. Anyone can make a complaint of lese majeste to the police.

These recent charges come at a relatively quiet time for Thailand after a year of much unrest. Since mid-December, large protest groups have refrained from holding mass rallies due to the resurgence of COVID-19 in the kingdom.

But angered by the government's recent actions, a small group rallied at Victory Monument in central Bangkok on Saturday, asking onlookers to write their own protest messages on a 112 m blank banner.

The demonstration soon met a violent crackdown by the police acting on the government's ban on political gatherings brought in on Dec. 26. Before the banner was confiscated, one of the supporters wrote "the COVID-19 is just an excuse," implying that the government was using the pandemic to impose restrictions in Bangkok to quell the pro-democracy movement rather than to stop the spread of the virus.

"Slitting the chicken's neck to frighten the monkeys" was how one royal observer described recent developments. On Tuesday, a Thai woman was sentenced to a jail term of 43 years and six months for lese majeste charges over her actions in 2015, luridly displaying what the law is capable of.

Royalists have been encouraged by King Vajiralongkorn's unusual long stay on home soil to go on the offensive. Since his accession to the throne in 2016, the king had spent most of his time in Germany. But over the past few months, he has traveled around Thailand, occasionally mingling with his supporters.

On Wednesday, prominent royalist Warong Dechgitvigrom announced the formation of a pro-monarchy political party called Thai Pakdee. "Today, we stand up and fight for the entire nation's revered and beloved institution," he said, referring to the monarchy.

Piyabutr Saengkanokkul, a pro-democracy politician and co-founder of the dissolved Future Forwad, quickly responded to Warong's move on Twitter. "The formation of a party that advocates the protection of the monarchy, whether by good intention or in the name of destroying others, only brings the monarchy into the political sphere," he tweeted.