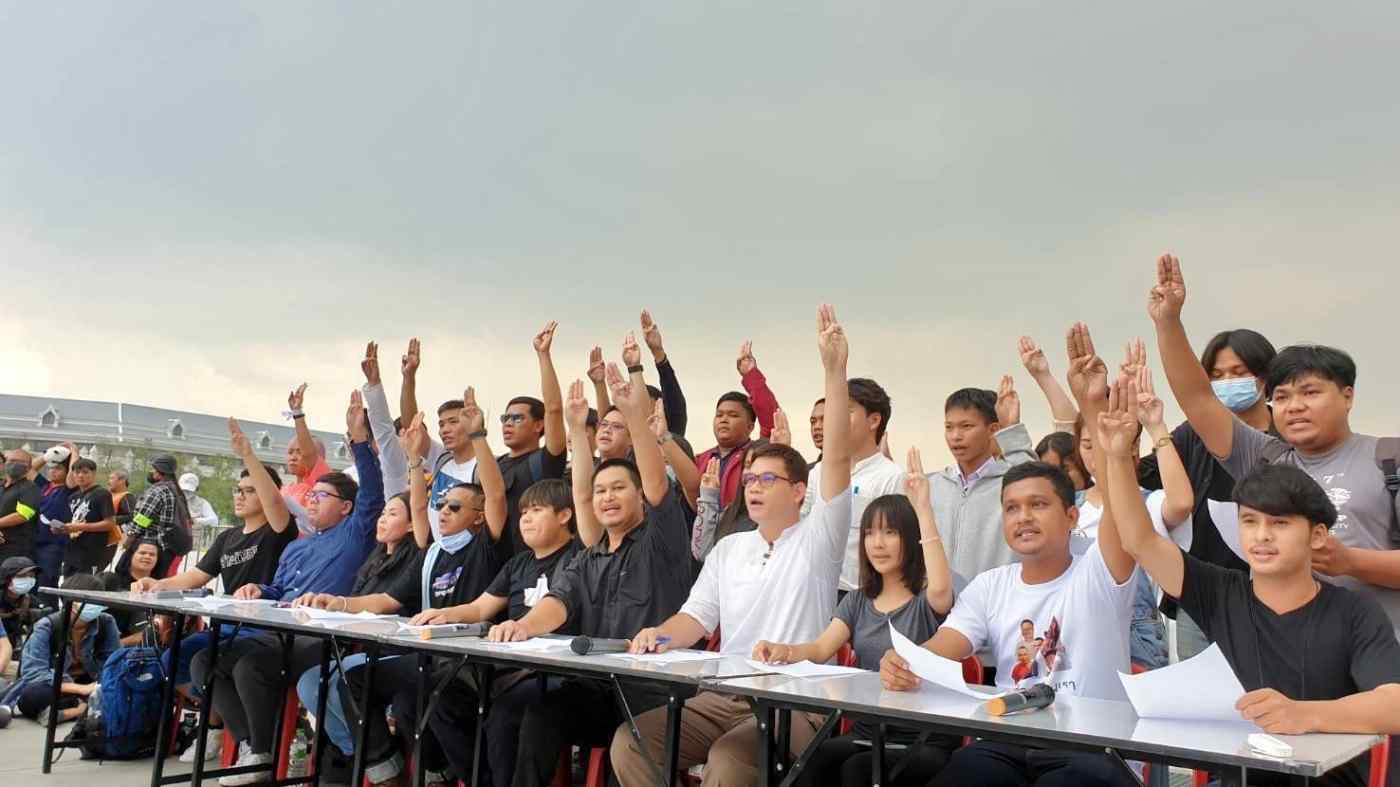 "We will not take part in any committee set up by the government," Jatupat Boonpattararaksa, or 'Pai Dao Din,' told reporters on Wednesday evening at Sanam Luang, a large open area in front of the Grand Palace. "We insist that the problems our nation faces cannot be solved if Prayuth remains in power."

Jatupat addressed the press conference alongside over 20 young leaders of recent protests that followed Prayuth's remarks on Oct. 28 revealing his intention to open talks with "stakeholders" in the political crisis.

"The cabinet agreed to set up a committee to find a solution," Prayuth told reporters. "The committee will involve members of parliament, senators and various stakeholders." The prime minister did not elaborate on any particular individuals, however.

In another development today, Government Spokesperson Anucha Burapachaisri said that Prayuth has already signed a motion to go before parliament that will urgently consider a bill to enable a national consultative process. This will give citizens the opportunity to express their opinions on modifications to the constitution and cabinet resolutions.

Thailand's existing constitution is its 20th since 1932, and was adopted by national referendum in 2016. It was the second draft at the military's behest following Prayuth's coup in 2014.

Protesters have consistently reiterated three basic demands: the resignation of Prayuth and his cabinet; constitutional changes drafted in consultation with representatives of the people; and reform of the monarchy.

"We will stage another big protest unless our demands are met in the near future," Jatupat said on Wednesday without going into detail.

Attapol Buapat, another key leader, said there is no intention to abolish the monarchy. "We condemn some members of the media who accuse us of trying to destroy the monarchy," he said. "In fact, we are now trying to ask all Thai people to join us in protecting the monarchy, and the only way to protect the monarchy is to reform it."

The press conference is the most structured response so far to King Maha Vajiralongkorn's comments on Sunday to doorstepping questions from a foreign correspondent. The king was mingling with an estimated 8,000 royalists outside the Grand Palace when the British reporter posed the questions.

"Your majesty, sir, these people love you, but what do you say to the protesters?" asked Jonathan Miller of Channel 4 News in the U.K. and U.S.-based CNN. "We love them all the same," the king responded three times.

"Is there any room for compromise, sir?" the reporter asked.

"Thailand is the land of compromise," the king said, before moving away uncomfortably with Queen Suthida.

Pro-democracy leaders dismissed the comments. "It is our consensus that there's no change and no compromise," Tattep Ruangprapaikitseree told Nikkei Asia on Tuesday. "I expect to see certain actions instead of just talking."

"I don't see any chance of compromise or talks," protest leader Passaravalee Thanakijvibulphol, or 'Mind' as she is usually known, told Nikkei separately. It was Mind who led thousands of protesters to the German embassy on Oct. 26 to deliver a letter demanding Berlin investigate whether the king conducts Thai state affairs on German soil.

"When we have a fair constitution, that would be a good time to start compromising, and that would include reforming the monarchy," said Mind.