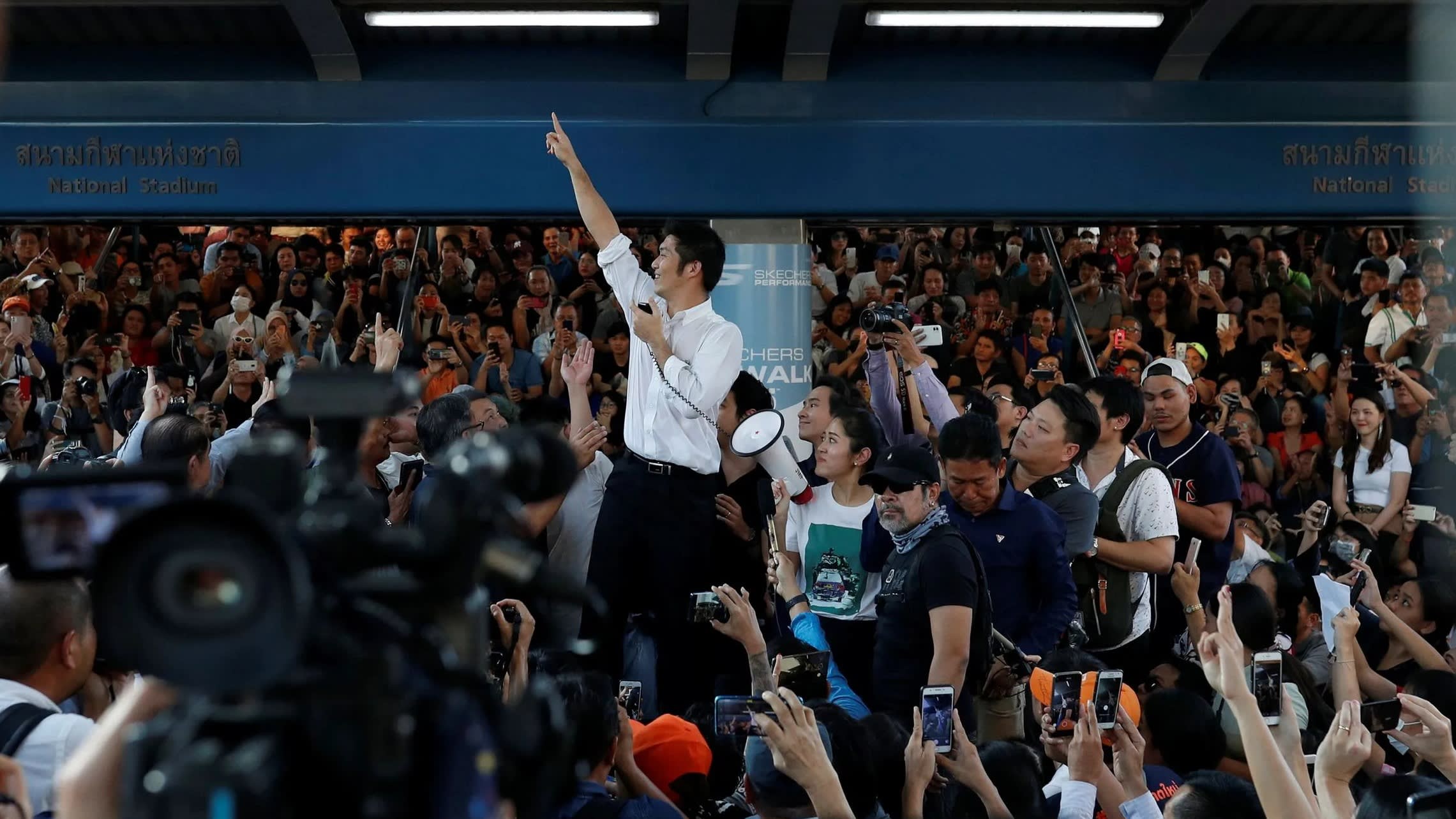 BANGKOK (Reuters) -- Several thousand people took part in Thailand's biggest protest since a 2014 coup on Saturday after authorities moved to ban a party that has rallied opposition to the government of former military ruler Prayuth Chan-ocha.

The demonstration in Bangkok, called just a day earlier by Future Forward party leader Thanathorn Juangroongruangkit, a 41-year-old billionaire, revived memories of the spasms of street protest that have roiled the Thai capital periodically during the past two decades of political turbulence.

But there was no sign of any attempt to block the biggest demonstration since Prayuth seized power in 2014 on promises to end such unrest.

"This is just the beginning," Thanathorn told the cheering crowd that spilled across walkways and stairways close to the MBK Centre mall, in the heart of Bangkok's shopping and business district.

Thanathorn has emerged as the most outspoken opponent of the government headed by Prayuth, 65, since an election in March that the opposition said was manipulated to favor the army.

Thailand's election panel has asked the Constitutional Court to dissolve the Future Forward party, accusing it of infringing the laws governing political parties by accepting multimillion dollar loans from Thanathorn.

Last month, the Constitutional Court disqualified Thanathorn as member of parliament for holding shares in a media company on the date his election candidacy was registered. Thanathorn disputed the ruling.

Among Saturday's crowd were some veteran "red shirt" protesters, supporters of ousted populist leader Thaksin Shinawatra, who had once clashed in Bangkok with the "yellow shirt" conservatives -- hard line loyalists of the palace and army.

But the were more younger anti-government protesters, many of whom said it was their first protest.

"It's time," said office worker Pantipa Tiakhome, 30. "They have done everything to hinder democracy from flourishing."

Helped by social media, Thanathorn has struck a chord with younger Thais. Meanwhile, the army has made plain its dislike of a movement it accuses of trying to rally the young against the monarchy and the armed forces.

"Today is a show of strength so that in the future others may join us. We're just here today as a test run. Prayuth, don't be afraid yet. The real thing is next month," Thanathorn told the protest.

A party spokeswoman said more than 10,000 people had joined the demonstration. Authorities did not give an estimate.

Many gave the three-finger salute of resistance to the former junta, a symbol drawn from the film The Hunger Games.

Government opponents are also planning a "Run Against Dictatorship" for Jan. 12.

Thanathorn signed an agreement on Saturday with six parties in an opposition alliance to push for changes to the constitution that was drawn up by the junta before the election.

He also won their support for the protest.

Among those parties was Pheu Thai, linked to Thaksin, who lives in self-exile since he was overthrown in 2006. His sister was ousted as prime minister by Prayuth.

Pheu Thai won the most seats in the 500-member lower house but has adopted a quieter approach to challenging the government than Future Forward, which came third in the election.

Palang Pracharat, the pro-military party formed last year by members of the junta's cabinet, came second. Prayuth told reporters on Friday it was inappropriate to organize a demonstration toward the end of the year.