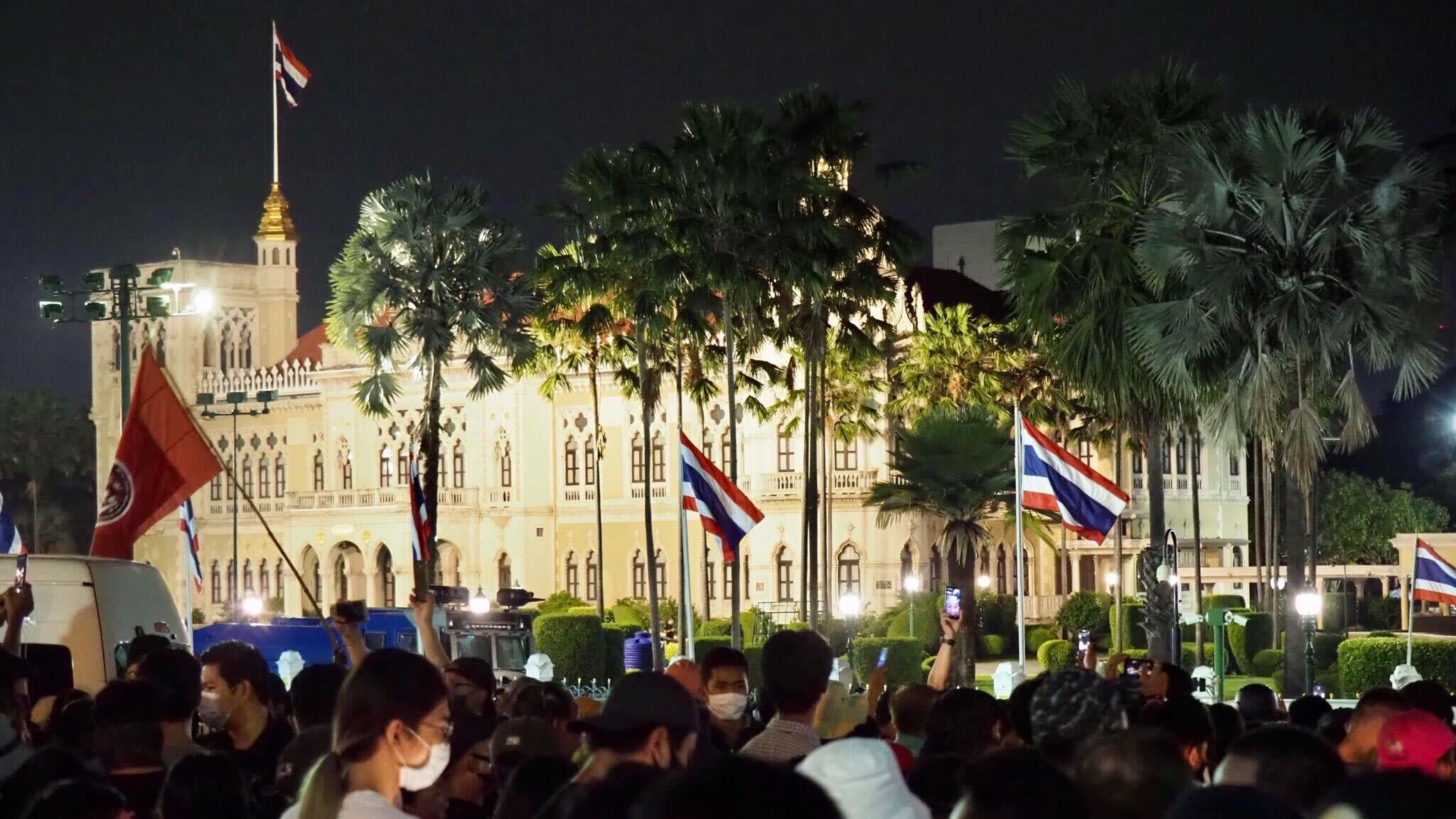 BANGKOK -- At least 8,000 demonstrators have massed around Government House, the seat of government in Thailand, which is now protected by hundreds of well-equipped Border Patrol police brought in from outside the capital.

The protesters negotiated their way peacefully through police barricades, reaching the compound just after 6 p.m.

At a press briefing, Col. Krissana Phathanacharoen, the deputy police spokesman, warned protesters preparing to spend the night camped outside that it is illegal to come within 50 meters of the 11-acre government compound. Some protesters have said they intend to stay three nights.

The compound is dominated by an Italianate 1920s building that has been used by successive prime ministers and their cabinets. Student leaders have already begun using the striking backdrop for fiery speeches demanding radical political reforms -- including to the monarchy. The latest protests are being viewed as a barometer of wider public support for these calls.

The Government House compound was taken over for months in 2008 by the People's Alliance for Democracy (PAD), the cutting edge of the Yellow Shirt royalist movement at the time.

The PAD orchestrated opposition to Prime Minister Samak Sundaravej, an elected proxy for Prime Minister Thaksin Shinawatra, who was ousted by the military in a coup in 2006.

The compound was also the scene of Yellow Shirt demonstrations during the 2013-14 political crisis that preceded a coup against the caretaker government of Prime Minister Yingluck Shinawatra, Thaksin's youngest sister.

The encirclement of Government House followed another day of political unrest in Thailand stemming from a student-led call last month for a general strike.

After the protest's commencement was moved up to 8 a.m. from 2 p.m. without warning, protesters began gathering at Democracy Monument, historically a popular political rallying point. The crowd was not big enough to dominate the area initially, but gathered in strength during the course of the morning.

Estimates of the turnout by afternoon differed wildly as usual. Organizers claimed to have reached their target of 100,000. Col. Krissana put the number at 5,500 by 4:30 p.m. Eyewitnesses estimated the total to be approaching 20,000 by early evening as people finished work and arrived late.

During the morning, human rights lawyer and activist Arnon Nampa took to the stage. "Let us have a peaceful demonstration," he said. "We will stay here on this side, and not cross over to clash with each other."

Arnon spoke after royalists in yellow shirts came close to the demonstrators, who had gathered on the northern side of the roundabout surrounding Democracy Monument. This smaller group occupied the southern part and streets running east and west. At their closest points, the two sides were just tens of meters apart but without incident. Activists Arnon Nampa, left, and Parit "Penguin" Chiwarak, waving, at a protest on Oct. 14, the 47th anniversary of a student-led revolt in 1973 that resulted in bloodshed but brought down the military government of the day.   © Reuters

Many of those in yellow had distinctive cropped haircuts, and were earlier seen being transported in Bangkok Metropolitan Administration trucks. They are believed to be undercover security personnel drafted in from provincial areas.

After the protesters set off for Government House at about 2:45 p.m. some 300 to 400 of the yellow-shirted security personnel remained in place along Rajadamnern Avenue. King Maha Vajiralongkorn's motorcade passed along the road without incident at 5 p.m. on his way to a ceremony at the Temple of the Emerald Buddha beside the Grand Palace.

Queen Suthida in a separate earlier motorcade did encounter demonstrators, who flashed three-finger salutes. She smiled and waved back. In the morning, Arnon urged people to give the student movement's trademark salute as royal limousines passed, and to recite a poem inspired by a popular uprising in 1973 that speaks of power belonging to the people.

Today's protest in support of the general strike was planned by a youth group, People's Party 2020. The choice of day was symbolic -- the 47th anniversary of a major student-led political uprising in 1973 that led to serious civilian bloodshed. The revolt brought down the decade-old government of Field Marshal Thanom Kittikachorn, which for years ignored demands for a new constitution.

People's Party 2020 is a composite of youth activist groups such as Free People and the Student Union of Thailand. People's Party in Thai -- Khana Ratsadorn -- is the name of the group that in 1932 overthrew absolute monarchy in Siam, as Thailand was formerly known.

Parit Chiwarak, a leading member of the United Front of Thammasat and Demonstration (UFTD) who goes by the nickname Penguin, called for the Oct. 14 general strike during an overnight demonstration in Bangkok on Sept. 19 that attracted between 40,000 and 50,000 participants, according to media reports. Organizers claimed the turnout was 100,000, while police put the figure at 18,000.

Another protest in August at Democracy Monument attracted at least 20,000 people. There have been many smaller demonstrations and flash protests around the country in recent months, with university and high school students wearing white ribbons and snapping their three-finger salutes to convey peaceful dissent.

Thais overseas have also come out in support of reform, with small protests as far afield as Copenhagen, New York, Sydney, Taipei and Tokyo.

Monday, Oct. 13, was meanwhile the fourth anniversary of the death of King Bhumibol Adulyadej and a public holiday. Royalists wore yellow to mark the occasion, and some early arrivals for today's protests were rounded up by the authorities.

The anniversary was one of the reasons for a much-longer-than-usual visit by Bhumibol's successor, his son King Maha Vajiralongkorn, who resides mostly in Germany with a large retinue. The king's private life and financial affairs have been attracting increased scrutiny of late. Questions have even been raised in the Bundestag, the German parliament. 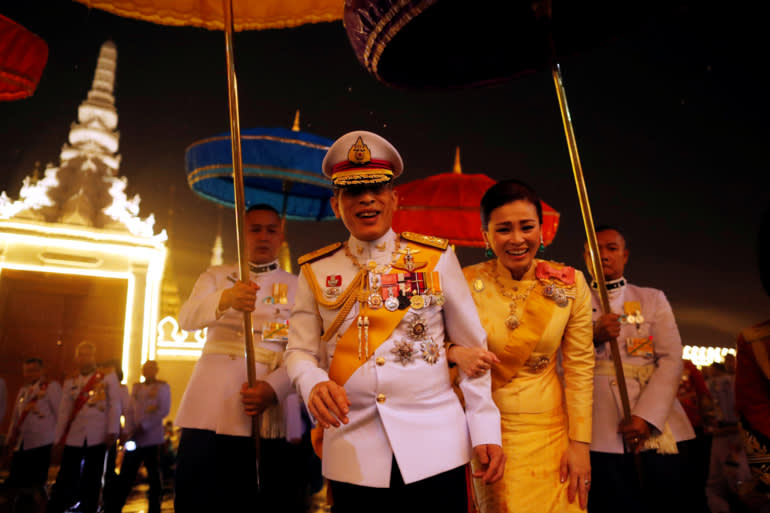 King Maha Vajiralongkorn and Queen Suthida greet royalist supporters who had gathered in the rain outside the Grand Palace on Oct. 13, the fourth anniversary of the death of King Bhumibol Adulyadej.   © Reuters

In response to a question from Frithjof Schmidt, an Alliance 90/The Greens member, Foreign Minister Heiko Mass said, "We have made it clear that politics concerning Thailand should not be conducted from German soil."

"The protest on Oct. 14 to force reform of the monarchy is unlikely to gain ground," Jade told Nikkei. He also believed that shifting the key purpose of the demonstrations too much in that direction to be unwise tactically: "It causes confusion and cuts allies," he said.

People's Party 2020 had nevertheless been hoping for a similar final turnout to the weekend of Sept. 19 organized by UFTD, even though this is the first major protest on a weekday.

The three main demands to emerge from earlier protests have been for the resignation of Prime Minister Prayuth Chan-ocha and his cabinet, constitutional changes drafted by representatives of the people, and reform of the monarchy under the constitution -- but not its abolition. There were also demands for an end to harassment and intimidation.

Reforms do not appear to be on the near horizon. On Sept. 24, thousands of protesters waited outside parliament while lawmakers considered constitutional amendment proposals from the ruling coalition and opposition. In the end, the debate was kicked down the road with a vote to set up a panel to consider the various proposals.

Thammasat University's student union issued a statement on Monday calling on the university to cancel classes from Wednesday to Friday to enable students to join the protest.

Responses to the general strike call from elsewhere were muted, however. As of Tuesday, no large companies had expressed concerns about absenteeism, and many employees had personal concerns.

"I attended past rallies, but will give it a miss this time," a female office worker told Nikkei on condition of anonymity. "Their calls resonate with me, but I am blessed to have a job in a time of economic difficulty, and won't risk it."

"The economy is getting better," Kalin Sarasin, chairman of the Thai Chamber of Commerce, told Nikkei. "I don't think anyone wants to lose their job by joining the strike."

The State Enterprises Workers Relations Confederation, the country's biggest union, with nearly 200,000 members from all 47 state enterprises, has declined to join the general strike, meaning that utilities and other services were likely to be unaffected.

"I don't see any sign of a big strike at the moment," Supant Mongkolsuthree, chairman of the Federation of Thai Industries, told Nikkei. "All mechanisms in Thai business are running as usual, and I expect this to be a symbolic protest with no violence." 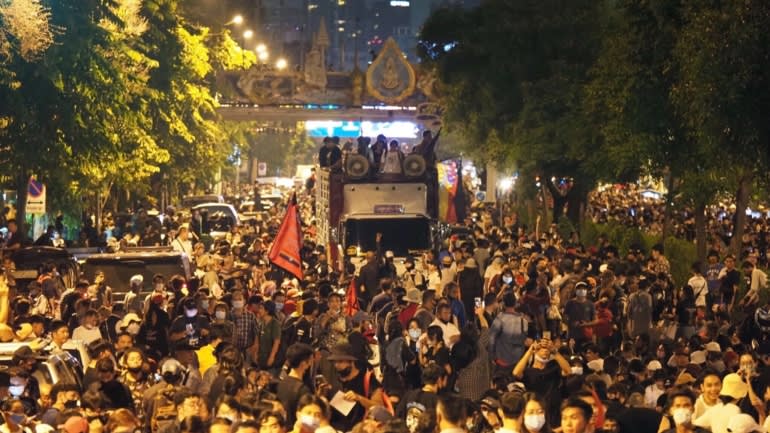 Eyewitnesses estimated that the number of protesters approached 20,000 by early evening as people finished work and arrived late on Oct. 14. (Photo by Masayuki Yuda)

Prime Minister Prayuth urged restraint after a cabinet meeting on Monday: "Please preserve the peace and order of our nation the best we can, with respect for the law so that others will not be affected." He did not, however, repeat his ignored call from September to avoid demonstrating because of the possible COVID-19 threat.

The Metropolitan Police Bureau said 3,000 police officers would be in attendance today, with checkpoints in place to screen for prohibited items and to check temperatures. Spokesperson Jirapat Pumijitr said additional officers could be drafted in if needed. Extra police checkpoints were already in place in the early morning on key roads into the capital, including expressways.

Gen. Narongphan Jitkaewtae, who replaced Gen. Apirat Kongsompong as army chief at the start of the month, advised protesters calling for reforms to the monarchy to "look at themselves first to see whether they have done everything right before telling others what to do." He also warned against creating conditions conducive to a coup. Thailand has already had 13 successful military takeovers since 1932, and is on its 20th constitution.