Requests flow in for game-changing devices after Azerbaijan victory ISTANBUL -- In January, Ugandan media showed a large convoy of armored personnel carriers driving through downtown Kampala, the capital, days before the general election. Turkish defense analysts identified the vehicles as made in Turkey.

Was the move intended to maintain security or intimidate the opposition with a show of force?

The government never said it was the latter, but President Yoweri Museveni, in power since 1986, won the election.

Today, it is Turkish drones that are in hot demand around Africa. Fresh from successful military operations in Libya, Syria and most strikingly in Azerbaijan, the Bayraktar TB2 armed drone made by Turkish defense contractor Baykar is drawing attention of prospective buyer countries as a combat-proven technology.

When Turkish President Recep Tayyip Erdogan visited Angola last month, the 29th African country he has visited, his host President Joao Lourenco reaffirmed the nation's interest in acquiring such capabilities. Lourenco had conveyed his intent when he visited Turkey in the summer.

"As you know, we are not conservative about such issues, and I told them we are ready to give all kinds of support," Erdogan said at a joint news conference with Lourenco. "Our defense ministers will talk, and we will take the necessary steps."

Turkish Defense Minister Hulusi Akar accompanied Erdogan on his Africa tour, ensuring that any agreement between the leaders was immediately put into action.

As Turkey's relations sour with NATO partners and Middle Eastern neighbors such as Egypt, Erdogan is turning to Africa to make up lost business opportunities. Military cooperation is especially effective in this strategy, with Turkey ready to sell everything from armed drones to armored vehicles and providing military trainers.

This also fits with the desire of African states to diversify their sources beyond established suppliers like China and France.

Turkish drones are cheaper than those made in the U.S. or Israel. They also are easy to operate and fit the needs of African states, whose most common use is against non-state actors and terrorist organizations, according to Caglar Kurc, a Turkish defense analyst.

"From time to time, African states have made expensive acquisitions -- like buying aircraft -- but failed in maintaining and operating them," Kurc said.

At Turkey's Teknofest aerospace and technology festival in September, visitors from all ages took turns operating Baykar drones using joysticks at ground-control-station simulators. It takes roughly four months of training to become a certificated TB2 drone operator or technician, much shorter than a jet fighter pilot. 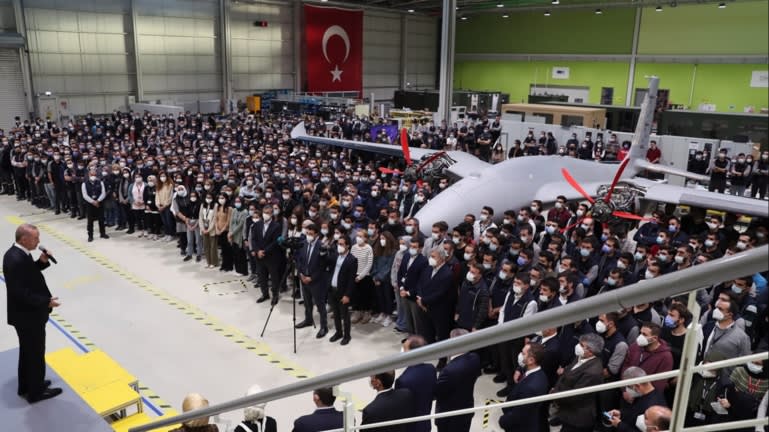 Hours after returning to Turkey from the four-day tour of Angola, Togo and Nigeria, Erdogan visited a Baykar factory on Oct. 21, telling employees about the response in Africa to the company's products.

"Let me tell you this frankly: In Africa, wherever we went, they asked us for unarmed and armed drones, including the Akinci," the president said, referring to Baykar's latest high-altitude, long-endurance unmanned combat aerial vehicle.

"The world powers are following you, what you did in [recent conflicts with] unarmed and armed drones," Erdogan said. "Because now you are among the world's top 3" most successful countries when it comes to unmanned aerial vehicles.

"I am proud of you as president of this country," he told the 1,500 or so young engineers.

Also present was his son-in-law, Selcuk Bayraktar, the company's chief technology officer, who was trained at the Massachusetts Institute of Technology.

Reuters reported last month Morocco had received its first batch of Turkish drones. Ethiopia also has requested them, much to the ire of North African powerhouse Egypt, which is at odds with both Addis Ababa over a hydropower dam on the Blue Nile and with Turkey over its support for the Muslim Brotherhood.

The Ethiopian army and forces of the Tigray People's Liberation Front have been fighting for almost a year in a bloody battle that has displaced more than 2 million people and claimed the lives of thousands.

Turkish Exporters Assembly data shows defense and aviation exports to both Ethiopia and Morocco increased sharply in the past two months, without providing details of any drone sales.

"There may be reports in international media that Egypt is uneasy that we are selling drones to Ethiopia. There is nothing official that came to our attention about the matter," Turkey's Foreign Ministry spokesman Tanju Bilgic told reporters last month. "After all, Turkey and Ethiopia are sovereign nations, and Ethiopia can buy these drones from wherever they want." Tunisia also reportedly received its first batch of armed drones from another defense company, Turkish Aerospace Industries, at the end of September.

In Nigeria, Gov. Bello Matawalle of the state of Zamfara said in mid-October that he had visited Turkey recently to seek assistance in security matters. Matawalle said he wants to "purchase armed drones to access bandit hideouts and strengthen intelligence gathering to battle the banditry and other criminalities in the state."

"China may have a cost advantage by lowering the price tag in exchange for other concessions from buyer states," he said.

But such low costs are often accompanied by poor service afterward as well as quality problems in sensors and guided ammunitions, at least in their exported versions, Mevlutoglu said. "Turkey, meanwhile, offers NATO standards to buyers," he said.

Mevlutoglu cited Somalia, Nigeria, Rwanda, Ethiopia, Niger, Mali and Mozambique as countries having serious security problems in which low-cost drones that are easy to operate and maintain can be a good solution.

Turkey's military engagement with Africa is not limited to arms sales. The country has built a large military base in Somalia where it trains local forces. According to a Pentagon report sent to Congress, Turkey also has been using a private military company, SADAT, founded by Erdogan's former chief adviser, to deploy "several dozen military trainers" to Tripoli to train government-aligned militias and Syrian fighters. SADAT maintains supervision and payment of an estimated 5,000 fighters in Libya, according to U.S. Africa Command. SADAT denies the Pentagon's claims.

"Turkey has been selling items like armored vehicles, but after the military accomplishments of Turkish drones in Azerbaijan and Libya, African states now also want Turkish drones, as [they are] cheaper and accessible compared to U.S. drones," Kurc said. "Turkey does not apply embargoes or try to change foreign policy course. Turkey follows the footsteps of China on a no-strings-attached arms sales policy, which is welcome for buyers."

Attendees included an African president, defense ministers and army chiefs. Many defense contracts and cooperation agreements were signed during the event, including Turkey selling its homegrown sniper rifle and machine gun to the G5 Sahel Joint Force -- consisting of Mali, Mauritania, Chad, Burkina Faso and Niger -- to fight international terrorism in a region largely seen as the backyard of former colonial power France.

Turkey is a relative newcomer but also an ascending power in terms of defense ties with Africa, Elem Eyrice Tepeciklioglu of Turkey's private Yasar University told Nikkei Asia. She is a co-editor of a new book, "Turkey in Africa -- A New Emerging Power?"

But Ankara's footprint still does not match that of established powers like China or Russia, she said. Since the Cold War, Russia has equipped and trained many African states, helping them to gain independence, and the country remains a strong player in arms exports and providing maintenance to Soviet-era weapons, she noted.

"Big powers like France and Turkey's regional rivals like Saudi Arabia, Egypt [and the United Arab Emirates] are doing everything to limit Turkey's influence in the continent," she said, warning that "the deeper Turkish involvement gets, the fiercer the competition will become with them."