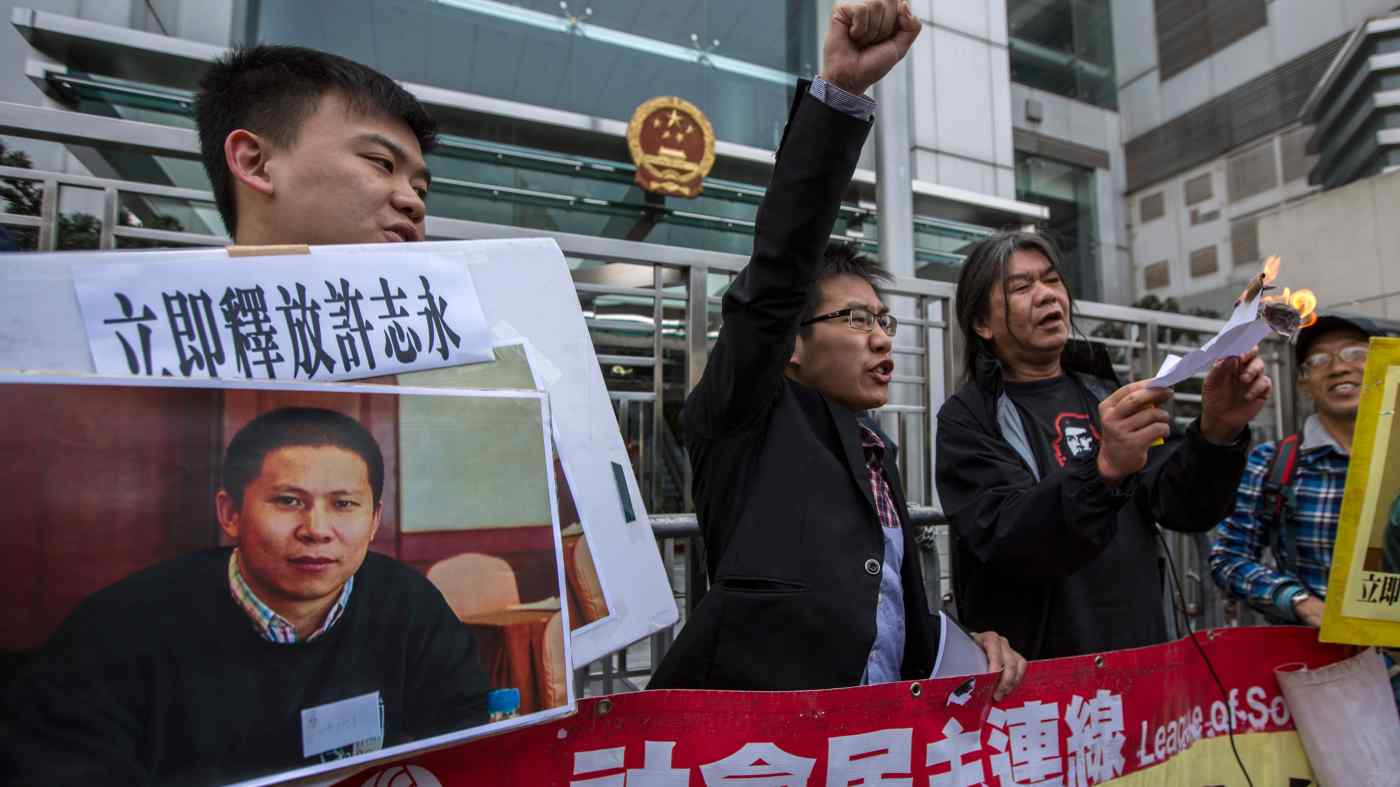 Protesters hold images of Chinese rights advocate Xu Zhiyong during a demonstration in Hong Kong in January 2014. He and Ding Jiaxi could face years in prison if convicted of subversion.   © Reuters
June 22, 2022 21:08 JST | China
CopyCopied

BEIJING (Reuters) -- Two prominent Chinese rights lawyers are set to go on trial behind closed doors this week on charges of state subversion, campaign groups said, part of a clampdown on dissent and rights activism under President Xi Jinping.

Hearings for Xu Zhiyong and Ding Jiaxi were scheduled in Linshu county court in the northeastern province of Shandong on Wednesday and Friday, respectively, relatives and friends told Reuters.

The two have been permitted legal representation but other visitors including relatives and diplomats would not be able to attend the trials, two people in touch with their lawyers told Reuters, adding that the lawyers were strictly warned by authorities against speaking to media.

The court's social media pages did not include notices of the upcoming trials, which is not unusual in sensitive cases. The court did not immediately respond to a Reuters request for comment and further details on the trials.

China's justice ministry also did not immediately respond to a Reuters request for comment.

Asked to confirm if the two human rights lawyers are facing a closed-door trial in Shandong this week, Chinese foreign ministry spokesman Wang Wenbin said on Wednesday he was not aware of the situation.

Asked to comment about criticism by international rights groups about the long-term detention of these lawyers, Wang said: "Everyone is equal before the law. Chinese judicial units handle cases according to the law and protect the legitimate rights and interests of every suspect and accused, and should not be defamed and distorted."

Xu, 49, and Ding, 54, are prominent figures within the New Citizens Movement, which called for greater transparency into the wealth of officials and for Chinese citizens to be able to exercise their civil rights as written in the country's constitution.

Xu and Ding, who have both previously been convicted and served jail terms, were targeted after attending an informal gathering in the southeastern city of Xiamen in late 2019 with other activists and friends, Amnesty International said in a statement.

On Feb. 4, 2020, Xu wrote an open letter calling for Xi to resign, citing his handling of crises including the Hong Kong protests to the start of the coronavirus pandemic in Wuhan.

Ding went missing in December 2019, and Xu disappeared the following February, shortly after he wrote the open letter.

Both were formally arrested on June 19, 2020, Luo Shengchun, Ding's wife and longtime campaigner for his and Xu's freedom, told Reuters.

"Our families are of course upset and angry" Luo said. "This is a naked case of injustice and persecution."

Chinese courts have a conviction rate of well over 99% and on such charges both Xu and Ding could face years behind bars.

Rights groups have called the trials a "sham."

"The reason that the men are being locked up and charged with ridiculous 'subversion' crimes is because they dare to envision a different China and to demand the country to be free and just," said Yaqiu Wang, senior China researcher at U.S.-based Human Rights Watch.

China has dramatically clamped down on dissent since Xi came to power in 2012. Hundreds of rights lawyers were detained and dozens jailed in a series of arrests commonly known as "709" cases, referring to a countrywide crackdown on July 9, 2015.

China rejects criticism of its human rights record, saying it is a country with rule of law and that jailed rights lawyers and activists are criminals who have broken the law.